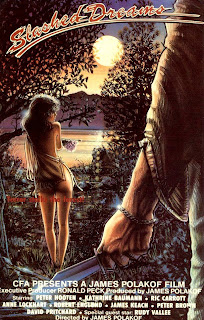 Directed by:
James Polakof
Once upon a time there was this sincere, but painfully dated, hippie era melodrama called SUNBURST about life and love and the importance of getting back to nature to find yourself... Then comes the video boom era of the 1980s and a rising star emerging in the horror genre for playing a certain facially-scarred predator who kills teenagers in their sleep. I can see the distributors now... "Well we got the rights to this old movie full of simple-minded 70s philosophy that nobody's going to want to see now, but Robert Englund has a small role in it... Now get this, how about we put England's name on a horror-looking video box and re-title it something like, say, SLASHED DREAMS, that will make people think it's like another Elm Street movie?" Well that precisely what happened with this one. It's not a horror movie and there are only two brief scenes that could conceivably land it in the genre; the first is a somewhat botched gang rape around a campfire and the other is the "revenge" scene with two guys fighting with hatchets and knives that is cut short before any blood could be spilled when one of the characters decides to do the mature thing... Zzzzz... But I'm still going to include this one here because of the packaging and the two aforementioned scenes; just don't watch this thinking you're going to be terrified by a knife killer stalking a random, half-naked cutie by moonlight (the eye catching image on the video box).
Here we basically have a story of two well-scrubbed California college students named Robert (Peter Hooten) and Jenny (Kathrine Baumann) falling in love. She's dating an immature frat bully named Mitchell (Ric Carrott), but decides to end the relationship because Mitch is a complete dickhead who doesn't understand her and makes one of his pledges do a pool-side striptease wearing female underwear and Mickey Mouse ears. So Robert and Jenny decide to visit a mutual friend named Michael Sutherland (Englund) who dropped out of college his freshman year to live as a hermit in a shack in the woods. For the majority of the movie we get the pair visiting a general store to listed to the owner (Rudy Vallee) do a monologue and sing, trecking through the forest, trying to go up cliffs, merrily skipping through the fields and getting all mushy on us by giving each other gooey-eyed looks, snuggling and rubbing berries in each others faces. After a bear eats all their food, they do eventually arrive at Michael's lakeside shack only to find he's not home. They go skinny-dipping, get it on by the campfire and are then harassed by two obnoxious redneck goons (played by scriptwriters James Keach, who's Stacy's brother and would eventually marry actress Jane Seymour, and David Pritchard). The two half-wits knock Robert out and one starts to slap around and rape Jenny, but they pull out early and leave. So then Michael shows up the next morning, and the three friends work through the trauma. Basically Jenny is spoon fed some bullshit about how life is sometimes cold and cruel, but you've just got to get over it and move on, which is probably going to come off as being pretty offensive to real rape victims. Robert does encounter the goons once more and basically rolls around in the mud with one of them for a minute to get out his frustrations. The goons run off into the woods and Robert, Michael and Jenny all laugh and give each other a big bear hug. The end.

So basically it's all a sensitive message movie about the virtues of being a simple-headed pacifist; a sort-of naive antithesis of Peckinpah's STRAW DOGS. Much of the soundtrack is composed of a collection of lame songs about how "animals are clumsy, too" and the world being full of "warm-hearted people with warm-hearted reasons" sung by some high-pitched squealer trying to emulate Carole King. The acting and nature photography are both OK. Leading lady Baumann (who has some brief nude scenes) was a former Miss Ohio and Miss America finalist who also appeared in THE THING WITH TWO HEADS (1972). The cast includes Anne Lockhart as Mitchell's ex-girlfriend and Peter Brown as a college professor.
★1/2
Posted by The Bloody Pit of Horror at 1:51 AM