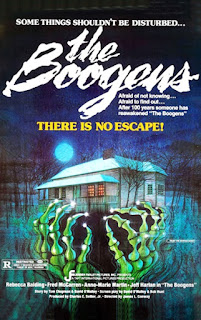 
It sounds like something that ends up in a crumpled tissue when you have a cold, but it's actually a 600,000 dollar-budgeted monster movie made in Park City, Utah. Over a montage of sepia-toned old photos and newspaper clippings, we learn the history of the fictional town of Silver City, Colorado. Back in 1888, it used to be the place to be if you wanted to make a good living, with rich veins of silver located all throughout the hills. In 1912, twenty-seven men became trapped during a cave in at the mine and died. A year later, the bad luck continued and, after some other miners reported being attacked by something living underground, the mine closed down for good. After being vacant all those years, Syndicated Mines out of Denver decide to purchase and re-open the place in the dead of winter. They send in old hands Brian Deering (John Crawford) and Dan Ostroff (Med Flory) to oversee the project and younger miners Mark Kinner (Fred McCarrin) and Roger Lowrie (Jeff Harlan) to assist on the development crew. The men set dynamite off to clear all of the rubble out of the way and find two different tunnels; one of which is blocked off from the 1912 incident. After clearing that mess out of the way, they then find an underground lake and the skeletal remains of around thirty men. All the while, they may be uncovering (or better yet unleashing) something else unexpected in the process...


Since they'll be in the area for awhile, Mark and Roger have rented out a secluded house from Martha Chapman (Marcia Reider). It won't be ready for another day and Martha decides to go out there early to turn on the heat and make sure it's all ready for the guys. Barely avoiding hitting a deer and running her car off the road in the process, she's forced to spend the night there, hears strange noises coming from the basement and... well... that's the last we'll be seeing of Martha. Mark and Roger move in and are met there by Roger's girlfriend Jessica Ford (Anne-Marie Martin), her friend Trish Michaels (Rebecca Balding) and an annoying poodle named Tiger. As the gang settle in and Roger and Jessica hope to make up for their two-week sexual dry spell (which amusingly keeps getting interrupted), Deputy Blanchard (Scott Wilkinson) swings by asking why Martha's car was left down the road in a ditch. 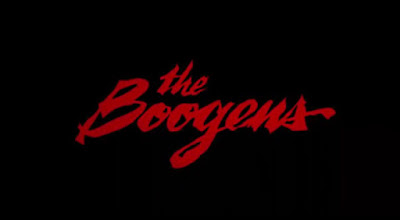 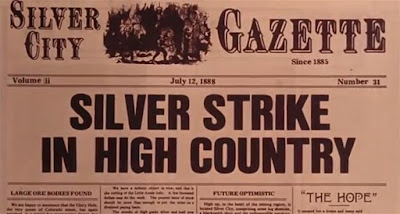 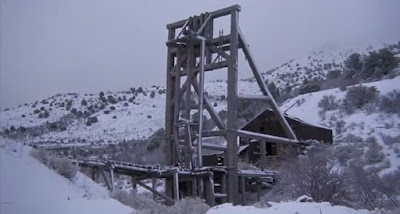 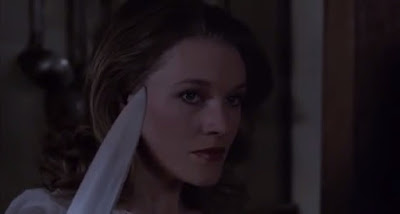 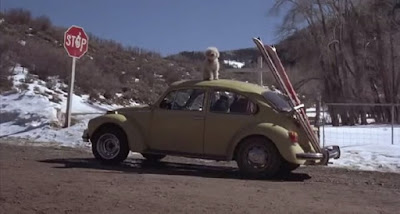 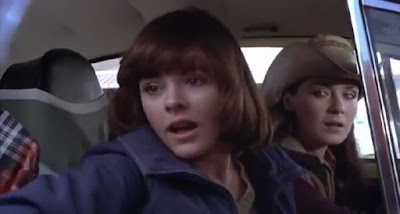 Off to town to grab some dinner they go, while Tiger stays behind and almost becomes something else's dinner. The gang are then off to a bar for some beers and pool, but Roger has to leave early and ends up getting mauled and dragged off by that certain something I keep talking about when he gets home. The next day, the mine site has been vandalized by someone boarding up the entrance, painting “Death” in red letters over a board and staking three crosses in front. The vandal is a crazed old man (Jon Lormer) seen lurking around the mine who wants to warn others away because his own father claimed to have had an encounter with a monster down there and ended up in a nuthouse. The monsters in question, which the old guy has nicknamed “boogens,” are small subterranean creatures with hooked tentacles who are able to get into houses in the area because of an underground tunnel system that was opened up during the dynamite blast. How they managed to survive for 70 years until then is anyone's guess. 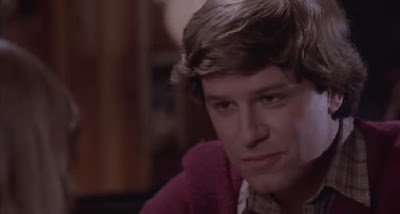 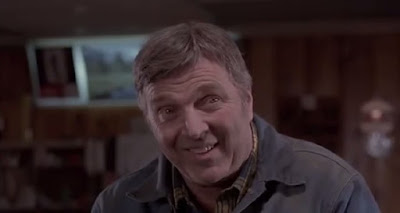 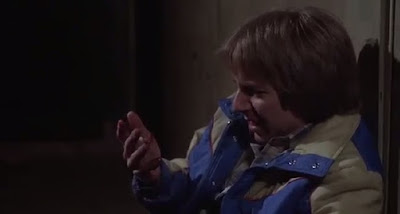 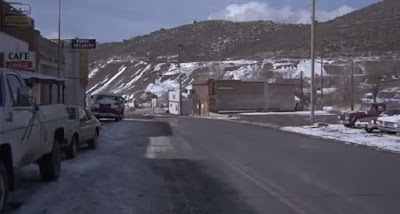 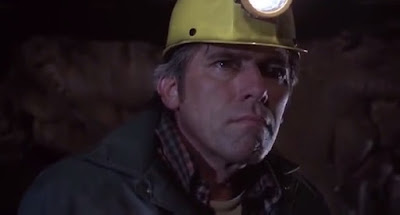 Creature features like this tend to go two different routes. The first is to just show the bloody creature right away in its full glory and go from there. The second is to mostly hide the creature until near the end to keep the audience in suspense as to what it may look like. While this second option can certainly be effective, it often depends on what happens during the long build-up period plus requires something of a payoff for the audience in regards to the creature design. Boogens attempts Option #2 and pretty much fails in the monster department with completely non-intimidating creatures. There are supposedly a slew of these monsters in the cave but the budget could only afford to make one of them so only one is seen on screen at any given time and even then briefly and in dark lighting. The wide-eyed monsters also look more cute than menacing. While that works fine for horror-comedies like Gremlins (1984), in a movie like this that attempts to be suspenseful and scary, it doesn't. 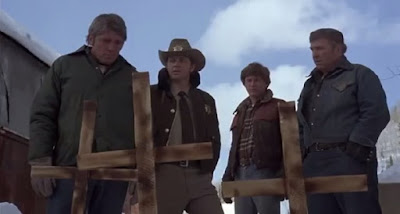 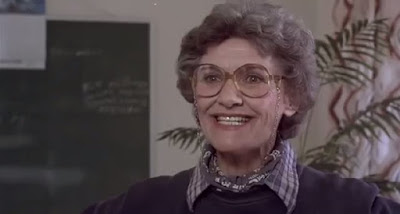 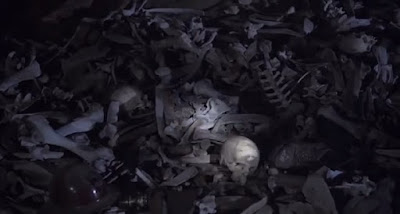 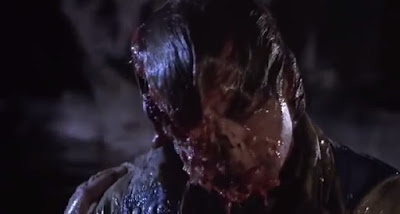 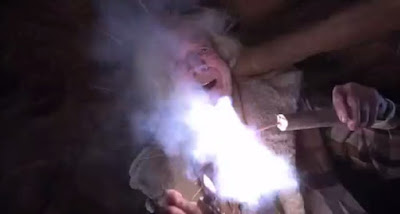 The monsters and horror content in this one are especially disappointing considering the script (written by Bob Hunt and David O'Malley) isn't half bad and has some surprisingly sharp, witty dialogue. The four leads are also uncommonly likable compared to the one-dimensional teen fodder usually found in these things and are appealingly played by the four leads. The supporting cast is more than competent in their respective roles (even the dog has some fun moments) and everyone's able to keep this moving right along until the horror content finally kicks in. Sadly, aside from one good scene where Martin's character is pursued through the house by one of the creatures, the rest of the horror and action fall a little flat. 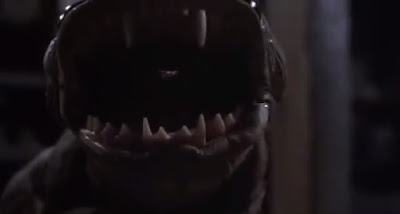 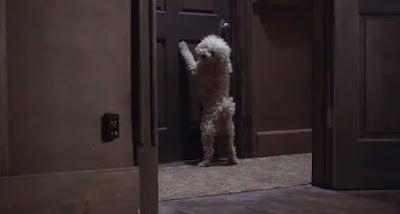 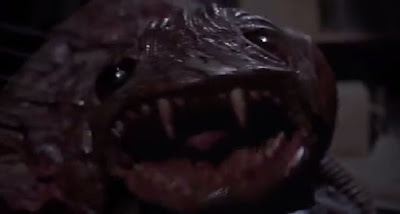 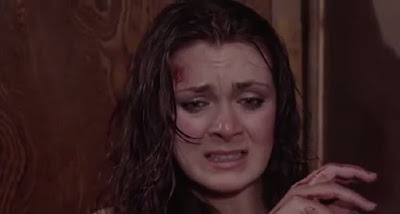 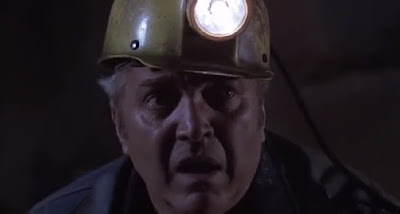 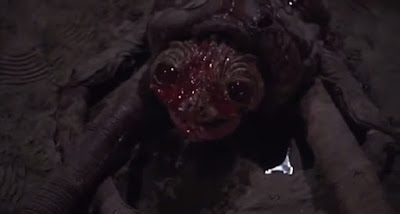 Producer Charles E. Sellier Jr., who went on to direct the notorious Santa slasher SILENT NIGHT, DEADLY NIGHT (1984), also penned a novel (!) of the same name based on this film. Both Conway and Sellier kept busy for many years working for Sunn Classics Pictures out of Park City, which specialized in family entertainment (like the Grizzly Adams movies and TV show), silly documentaries about Big Foot, the Loch Ness Monster, the Bermuda Triangle and other strange phenomena and religious-themed junk like In Search of Noah's Ark (1976; also directed by Conway) and In Search of Historic Jesus (1979). Character actor Cliff Osmond (INVASION OF THE BEE GIRLS) was an associate producer. Strangely, 1980-81 saw the production of numerous horror films set around mines, including THE STRANGENESS (which was filmed in 1979 into 1980 and not released until 1985), the popular slasher My Bloody Valentine and Demonoid: Messenger of Death (both released in 1981). 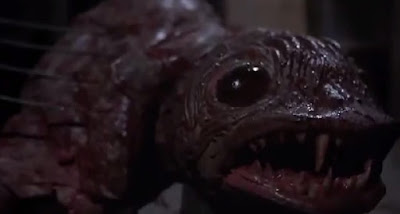 The theatrical distributor was the short-lived independent company Jensen Farley Pictures, who also handled the releases of The Killer Instinct (1981; aka Baker County U.S.A.), Wacko (1981), Madman (1982) and CURTAINS (1983). JFP also made a few in-house productions like the surprise hit Private Lessons (1981) and the babes-behind-bars trash “classic” Chained Heat (1983). However, their most successful venture was acquiring the U.S. release rights to the African comedy The Gods Must Be Crazy (1980), which they wide released in America in 1984. Boogens itself was a recipient of a very late VHS release in the U.S., which didn't happen until the mid-90s. Paramount acquired the rights for TV showings and the film sat around collecting dust until Olive Films released in on DVD and Blu-ray in 2013.