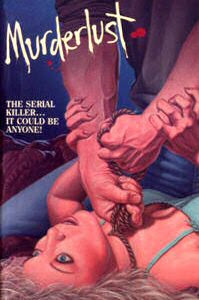 Steve Belmont (Eli Rich) is just your average, All-American guy. He's respected by the community, spends his days working as a security guard and never misses a church service. A well-liked Sunday School teacher and youth activity director, Steve is quickly ascending the ranks at his place of worship and is even being considered to run their new "Adolescent Crisis Center" once it opens. Oh yeah, he's also a serial killer the press has dubbed "The Mojava Murderer." Steve is impotent, behind on his rent, being falsely accused of sexual misconduct by a teenage troublemaker in his church group (Lisa Nichols) and has to deal with an incredibly nosy, critical and annoying cousin (Dennis Gannon), so he vents his frustrations by murdering random women and dumping their bodies in the desert. To keep up the facade of normalcy, he fakes having a psychology degree to help secure the crisis center position and begins dating a nice girl (Rochelle Taylor) who attends the same church.

Sadly, the murder scenes are the only time this movie comes to life. During the opening number, he pays a hooker 100 dollars for a blowjob, get her into his van and then whacks her over the head with a tire iron after she mocks his "wet noodle" and accuses him of being gay. He then lures a blonde into his apartment, strangles her with a rope and hauls her body out of the house in a trash can. During the film's most tasteless scene, he poses as a photographer to lure a plain underage schoolgirl back to his apartment, gets her drunk on wine, forces her to perform oral sex on him while he has a gun pressed against her head and then kills her. None of the murders are bloody and while the set-ups may sound sleazy as all get out, the film keeps nearly all of the unpleasantries either dry or completely off-screen.
.
In theory, the "outwardly respectable bible thumper by day/ depraved prostitute killer by night" premise sounds like it might be offensive enough to entertain, but actually sitting through this bland, very slow moving and aimless movie is a whole other story. The acting and dialogue are bad throughout, but neither is bad enough to elicit any laughs. It's too restrained and drab to be outrageous, the dull cast isn't good enough to pull off the "dramatic" moments and the writers almost completely overlook the potential for biting social commentary and black comedy. Hell, even some sick, gutter-level bad taste humor would have worked fine here, but we don't get any of that either. And as a former Sunday School attendee myself, I don't recall phrases like "F.U.!" or "big prick" being casually thrown around during class. There's some arial photography of the desert. I guess that was nice.
.
Lead actor Rich went on to appear in DANGEROUS LOVE (1988) and THE JIGSAW MURDERS (1989), while Ashley St. Jon (aka porno actress Lisa Lake) is on hand briefly to strip down to a thong during the second murder scene. Director Jones also made the much-better LET'S PLAY DEAD (1973), as well as THE LOVE BUTCHER (1975), THE FOREST (1981), PROJECT NIGHTMARE (1987) and HOUSEWIFE FROM HELL (1993). It received a VHS release from Prism, but there's no R1 DVD to my knowledge. Trust me, no one's missing out.
.
★1/2

Posted by The Bloody Pit of Horror at 6:49 PM 2 comments: