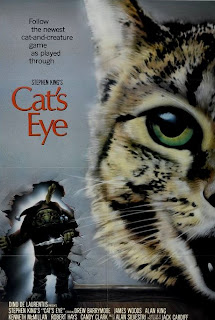 
The unstoppable Stephen King scripted this uneven trio of tales, with a young and ever-so-cutesy Drew Barrymore (who'd just starred in the mediocre King adaptation FIRESTARTER) specifically in mind to play several roles. The framework involves a cat named General who weaves in and out of all of the stories and uses up about eight of his nine lives trying to get from point A to point B. After surviving being chased by CUJO and almost being run over by CHRISTINE, General is abducted off the streets of New York City and taken to "Quitters Inc.," an extreme anti-smoking clinic, to help demonstrate Dr. Vinnie Donatti's (Alan King) patented electric shock room. At a friend's recommendation, Richard Morrison (James Woods) shows up at Quitters to try to kick the habit. Before he can back out of the four-step program, he's informed that if he doesn't quit smoking immediately, his wife and daughter face torture, rape and bodily mutilation (!) Donatti sends out a henchman to spy on Richard to make sure he doesn't light up, and it just takes one relapse for Morrison to stick with the program. This black comedy features a nightmare party scene making use of The Police's Every Breath You Take and electro-shock scenes where Twist and Shout and 96 Tears are played. Barrymore shows up briefly in thick glasses as Woods' (retarded?) daughter and there's a clip of THE DEAD ZONE (1983) on a TV set. It's pretty silly.

General escapes the clinic and takes a ferry to Atlantic City, New Jersey for our next tale. Caught in between a busy intersection, mob boss Cressner (Kenneth McMillan) and a few friends make a bet on whether the cat will get run over trying to cross the street, which results in several of the participants trying to coax the cat into traffic just for a few thousand bucks. General manages to make it across safely, so Cressner takes him back to his high rise penthouse apartment where a nasty wager is about to take place. Because he's sleeping with his wife, tennis instructor Johnny Norris (Robert Hays) is forced at gunpoint out onto a ledge surrounding Cressner's flat. If he can make it all the way around the building without falling, Cressner promises he can have his wife plus some money. Johnny faces high winds, the sadistic mobster using various tactics to make him fall (including a fire hose) and a pesky pigeon who keeps pecking at his ankle. General manages to foil the bad guy's plans before he runs off and hitches a ride on a train.

Arriving in Wilmington, North Carolina (where most of this was filmed), General has finally reached his destination: the home of young Amanda (Barrymore again). A tiny troll (designed by Carlo Rambaldi) shows up at around the same time and is intent on stealing Amanda's breath while she sleeps. After the troll kills their pet bird, Amanda's awful mother (Candy Clark) blames General and sends him to the animal shelter to get euthanized. Can the kitty escape and make it back to the house in time to save Amanda? The climactic cat / troll showdown features scale sets, the troll floating around the room on balloons and spinning on a record player (while Every Breath You Take plays yet again) and lots of hokey early green screen work. With James Daughton as the father and an ending right out of a Purina Cat Chow commercial.

Executive produced by Dino De Laurentiis and co-produced by Milton Subotsky (formerly of Amicus films), with an appropriately whimsical score from Alan Silvestri, Cat's Eye never makes it up high up on the list of favorite King films and for good reason. Despite the presence of Woods, the first story seems like a complete throwaway, and the final one (the only authentic horror story in the bunch) is juvenile, unscary and hokey. Only the second manages to generate any actual suspense. Being a cat lover, I really wanted to like the scenes with General, but the treatment of the cat throughout is surprisingly mean-spirited; with animal cruelty being played up for cheap comedy throughout. That aspect leaves a bad taste in one's mouth. The end theme song is sung by Ray Stevens.

Director Teague had previously made the cult hit ALLIGATOR (1980) and the King adaptation CUJO (1983); two solid and successful genre offerings. Cat's Eye seemed to stop him dead in his tracks. The DVD is from Warner.