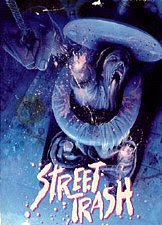 Directed by:
Jim Muro
Well, the title sure don't lie. Most of STREET TRASH takes place in the street and there's certainly a lot of trash lying around. Trash in this case being of the paper, glass and, uh, human variety. Shot in only the most scenic of gutters, junkyards, street corners and back alleys of New York City, the filmmakers claim to have taken their cue from Akira Kurosawa's DODES'KA-DEN, but basically it's just a heaping helping of assorted depravity. You can take that as a recommendation if you like. It's a pretty tough film to assign any kind of score to. Even though it's sick, stupid, irritating, profane, tasteless and gratuitously gory much of the time, in its own twisted way it's also inventive, well made, clever and features some arresting camerawork. There are also plentiful (and colorful) gore effects and some genuinely amusing bits. You be the judge whether its attributes outweigh it's flaws. I'm kind of torn on the matter, but multiple viewings have proven rewarding. Fans of Troma movies, which in many ways this resembles both in look and tone, will probably get a kick out of it.

The plot centers around a pack of grotesque bums who drink "Viper" booze (sold for a buck) and end up melting into pools of acidic goo. Other than the bums; cops, mobsters, innocent bystanders and workers at a junkyard also become involved in the mix. Almost every single character in the movie is obnoxious, hateful or insane, aside from a compassionate social worker (Jane Arakawa) and a sensitive young street person (Mark Sferraza). Gore FX include a game of keep-away with a severed penis, lots of melting skin, decapitations, a human explosion, a ripped off arm, impalements, and much, more. Jennifer Aspinall (THE TOXIC AVENGER) really outdid herself on this one. A wealthy, drunk woman is gang raped and killed by "street trash" and a guy (played by Troma movie regular Pat Ryan) who has sex with her dead body catches syphilis! Another memorable sequence has a cop beating a mob henchman unconscious and then vomiting all over his face. FRANKENHOOKER star James Lorinz has a hilarious cameo. Needless to say... View this one at your own risk.

Writer/producer Roy Frumkes was also responsible for the outstanding Romero documentary DOCUMENT OF THE DEAD (1988) and has a cameo getting his face melted off by yellow goo. Director Muro now works as a cameraman (on big-budget movies like TERMINATOR 2).
★★
Posted by The Bloody Pit of Horror at 9:54 PM