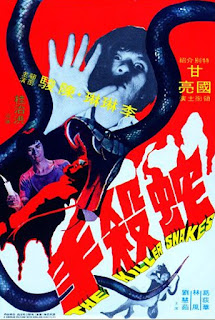 
Everyone who knows me, knows that I'm not a snake fan. There's just something about them I cannot stand. I know it's irrational and snakes help keep mice, rat and insect populations in check and thus serve a useful purpose. I've even done numerous things to try to break myself of this fear including petting snakes, actually paying to have my picture taken with a boa around my neck at an amusement park and volunteering to write about killer snake films in the book When Animals Attack. At one point, I went so far as to go to a friend of a friend's home knowing they let their two pet snakes slither around freely just to see if I could handle it. All that proved is that I could handle it yet hated every second of it and couldn't wait to leave. Even if I don't scream and run, my body immediately tenses up every time I'm around a snake. I don't like their eyes. I don't like their tongues. I don't like their scales. How they eat and the way they move around just freaks me out. Having already tried to conquer this fear head-on numerous times, I basically just gave up and accepted the fact that I don't like snakes and I never will.


Back when I was still actively trying to cure my ophidiophobia, I collected a bunch of snake movies that I was going to force myself to watch. While I did view some of the more lighthearted ones, others I never got around to. I particularly avoided some of the more extreme examples of this type, like this one and Calamity of Snakes (1982). So we'll see how this goes... 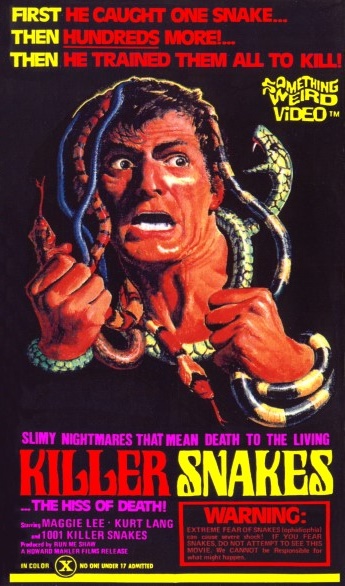 In the sepia prologue, a young boy listens to a woman (his mother) having kinky sex while begging for her lover to hit her and then takes a snake out of a box. That's followed by opening credits swarming with snakes and then some guy cutting one open (as it bites his hand!!), removing its gall bladder and draining it into a bowl. Then some schmuck drinks it because a local custom says it's supposed to increase one's virility. Fuck. This isn't even two minutes in and it's already killing me.


Awkward, scrawny, virginal, nail-biting, unemployed loner Zhizhong Chen (Kwok-Leung Gan), the now-grown kid from the opening scene, fantasizes about bondage, whipping, dripping hot candle wax all over tied up women and other kinky things. We later get more flashbacks about his mom and her lover that further explain why he is the way he is is. Zhizhong has a crush on Xiujuan (Maggie Li Lin-Lin), a nice girl who lives and works in the same impoverished, crowded urban area and feels sorry for him as he's always being bullied. Zhizhong gets a job working as a delivery man. The hours are 10 a.m. to 11 p.m., the pay is 400 dollars a week and the boss (Chin Chu) is an asshole, but it's a job and, in the slums where he lives, at least that's something.

An injured cobra whose gall bladder was removed slithers into Zhizhong's room one night. He talks to it ("A snake's life is just as precious as a human's, don't you agree?"), promises to tend to its wound, stitches it up, makes a bed for it in a box and tells it to rest. He names it Xiaobiao and the snake eventually fetches other snakes who've also been injured and escaped their fate as someone's dinner by neighbor Fucheng Zhou (Chi Chou), who runs the snake shop next door. Zhizhong also fixes their wounds and before long he has a virtual mini-army of snake "friends" living with him that he mostly keeps in a pit he's dug out on the floor. Because of his new job, Zhizhong builds up the courage to finally ask Xiujuan out and she agrees to go to the movies with him. Things are finally looking up, but it doesn't last.

While out delivering food, Zhizhong runs across cruel hooker Jinyan (Helen Ko) and some hooligans who decide to beat him up and rob him. When he returns to work, he's fired. Meanwhile, Xiujuan's sickly father (Li-Jen Hao) starts getting worse. Dealing with him, she's unable to meet Zhizhong at the cinema, so he thinks she's stood him up. But Xiujuan has more pressing issues. Working as a toy vendor doesn't pay much and if she's unable to raise enough money for medical care, her father will soon die. Not only that, but she's behind on rent and her shrill landlady keeps threatening to evict them. Her friend Fang Fang (Terry Lau) recommend she become a call girl just like her to make the cash she needs. Feeling she has no other option, Xiujuan goes to live with her friend, who shows her the ropes and gives her a makeover so she doesn't look like such a "country bumpkin."

After being beaten and robbed again by Jinyan and her thugs, Zhizhong (who carries his cobra best friend in his pocket) discovers Xiaobiao and the rest of the snakes he's rescued are willing to kill for him. In fact, he can tell them exactly what to do and they obey. He has them kill the thugs, then ties Jinyan up, whips out some more snakes and has them enter her between the legs (!) before biting her to death. Zhizhong returns home and demands even more snakes. After all, he has a lot of venom to direct toward a whole lot of different people who've treated him like garbage. He breaks into Mr. Zhou's shop, takes all of his snakes and then kills him. Both Zhou and Jinyan's bodies are discovered and police start looking into matters.

Elsewhere, Xiujuan is making her money "entertaining" men (dancing with them and keeping them company) but hasn't quite taken the plunge into full-fledged prostitution yet. Little does she realize but Fang Fang, who turns out not to be much of a friend, would love to change that. In fact, she's trying to make extra money by arranging for a rich, pervy customer named Mr. Hu (Richard Chan Chun) to take the girl's virginity. Fang Fang and Hu get Xiujuan falling down drunk, Fang Fang collects her "reward" and then sends Hu and Xiujuan on their way to the "Love Motel." When Zhizhong finds out what's going on, he decides to get even in scenes that involve rape, bondage, sex, hissing Komodo dragons and dozens of snakes unleashed in an apartment.

Director Chih-Hung Kuei is one of my favorite Asian genre directors but, unlike most of his other films, this isn't exactly fun. It's too well-made and serious to be campy despite the crazy premise. The urban setting is grim, filthy, depressing and hopeless. The photography is dark. The characters are dirty, mean-spirited, terrible people for the most part. As per Kuei's usual, it's stylishly directed and has shots of colorful lighting throughout, though it's nowhere near as visually imaginative / bonkers as some of his later films. Because most of the snake scenes take place in dimly lit areas, they're actually easier to sit through than they otherwise would have been. The biggest surprise is the large amount of fetishistic sleaze and female nudity. There's so much kink and BDSM that this almost comes off like one of those Japanese pinky fetish movies.

Some actual snakes get sliced up, chopped in half and burned alive in this film, so there's your animal cruelty warning. Also of note: Shaw Brothers get a chance to plug their Jade and Pearl Theaters here. At the height of their popularity in the 70s, Shaw owned over 200 theaters throughout Asia which I'm sure helped when it came to keeping their own films in circulation. The Jade and Pearl were two cinemas in the same large building located on Causeway Bay and had a combined seating capacity of nearly 3000 people. They were demolished in 1998 to make room for a new MCL Cinema but you can get a glance at them in their heyday right here. 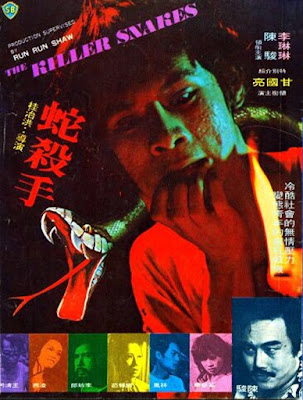 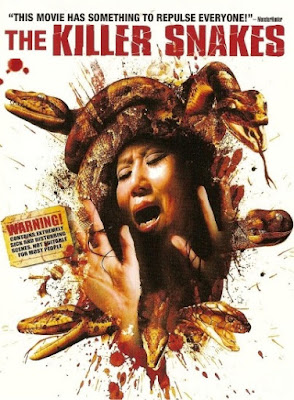 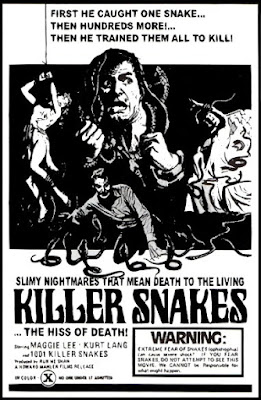 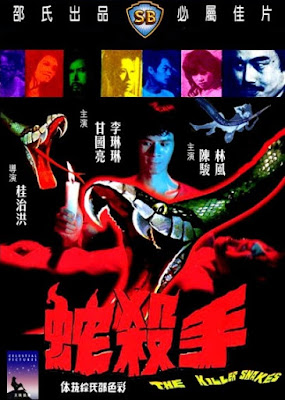 Surprisingly, this received a limited theatrical release here in America (it was given an X rating) and was one of the only Shaw Brothers horror films to be English-dubbed for U.S. distribution. Something Weird released that version on video in 1992. The Image / Celestial Pictures DVD contains both the original Cantonese / Mandarin track with an English sub option and the English language track so you can watch it either way.