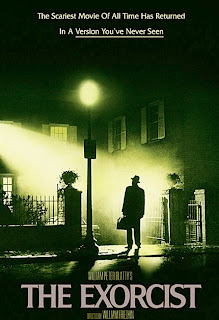 Directed by:
William Friedkin
The always-fantastic Ellen Burstyn is Chris McNeil, a busy actress, single mother (and atheist) living in Georgetown with her young daughter Regan (Linda Blair). After being bothered by some strange noises coming from the attic, Regan becomes possessed by a demonic spirit that claims to be Satan, spits up green gunk, does head spins, curses like a truck driver, punches her mom, stabs herself between the legs with a crucifix and throws a select few victims out her second story window with their heads on backwards. Several failed attempts at getting help from various doctors and psychiatrists follow, until Chris is forced to reach out to the church. Stern and experienced Father Merrin (Max von Sydow) and troubled and guilt-stricken Father Damien Karras (Jason Miller), who feels responsible for the death of his own mother, show up and attempt to drive the evil out of the young girl. Meanwhile, Lieutenant Kinderman (Lee J. Cobb) is investigating strange goings-on around the house.

Now sometimes criticized for relying too heavily on Dick Smith's exceptional, state-of-the-art make-up effects, this still remains one of the most popular, influential, notorious (many viewers actually passed out at theater screenings) and shocking horror movies ever made, and also one of the most critically acclaimed. It won Golden Globes for Best Director, Film, Supporting Actress (Blair) and Screenplay. Oscars went to Best Adapted Screenplay (William Peter Blatty, based on his best selling novel) and Sound, but it was nominated for a total of 10, the most ever for a horror movie. That record wasn't even challenged until 1991's THE SILENCE OF THE LAMBS. Blair supposedly lost out on the supporting actress Oscar because parts of her performance were played by a mechanical double and/or using the husky vocal talents of Mercedes McCambridge (who demanded to be credited for doing the demon voices). Linda's been stuck in the wonderful world of B-movies ever since, but that's cool because we love her. Burstyn lost out on her Oscar, too, but took one home a year later for ALICE DOESN'T LIVE HERE ANYMORE. Also in the cast are Kitty Winn as Burstyn's personal assistant, Jack MacGowran as a drunk, Rudolf Schundler and Barton Heyman and Peter Masterson as doctors.

The Jack Nietzche score and Owen Roizman cinematography are both top-notch. It was followed by lots of rip-offs (like the Italian BEYOND THE DOOR and the Spanish EXORCISM) and four official sequels thus far. Blair, von Sydow and Winn returned in the critically blasted EXORCIST II: THE HERETIC (1977), George C. Scott took over as Kinderman from the late Cobb for EXORCIST III (1990; easily the best of the sequels) and the fourth chapter was an extremely troubled production (that began life in 2002) that would have to be shot several different times. The first, by director Paul Schrader (eventually released as DOMINION: PREQUEL TO THE EXORCIST in 2005) was deemed unreleasable and not marketable by the production studio, Morgan Creek. He was replaced by Renny Harlin, who used just some of the footage from Schrader's film for the 2004 release EXORCIST IV: THE BEGINNING. A 1998 EXORCIST reissue features never before seen footage (scenes that were left on the cutting room floor; including a cool bit where Blair does the "spider walk" down the stairs) and interviews with the cast and crew. Also released was the documentary FEAR OF GOD: THE MAKING OF THE EXORCIST.
★★★1/2
Posted by The Bloody Pit of Horror at 8:21 PM