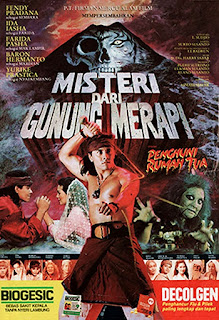 ... aka: Misteri dari Gunung Merapi, Episode 1: Penghuni Rumah Tua
... aka: Mystery of Mount Merapi
... aka: Mystery of Mount Merapi: The Old House's Inhabitants
... aka: Mystery of Volcanoes
Directed by:
L. (Lilik) Sudjio
There are movies that are all over the place and then there's this one. Yeesh! A volcano erupts and out shoots old wizard Ki Jabat (Piet Pagau) sitting atop a glowing, floating piece of basalt. He flies over to his young peasant disciple, Sembara (Fendy Pradana), with a proposition. 40 days from now, he's to enter the dangerous "Forbidden Forest" to increase his knowledge of supernatural powers. If he's successful (and survives), he'll be promoted from pauper to prince. Against his grieving widowed mother's wishes, Sembara accepts the challenge. He'll not only leave her behind, but also his lover, Farida (Ida Iasha). The two are in a secret Romeo and Juliet-style relationship where Farida's parents, Rosmina (Rina Hassim) and Rasiman (Asrul Zulmi), disapprove of them being together and are willing to go to great lengths to keep them apart.
After spying on the young couple in the woods, the parents send some of their thugs out with orders to kill. Sembara is beaten, slashed with swords and has a machete stuck in his back but, before the gang can administer the final death blow, they're scared off by a black panther. Sembara removes the machete out and passes out. Instead of treating him like fancy feast, the ferocious feline lies down next to him and starts licking his wounds. The thugs report back to the parents that Sembara has been eaten, which clearly doesn't sit too well with Farida, especially after she discovers her parents ordered a hit out on him. Sembara's only crime was coming from a poor family and the evil parents merely viewed him as a roadblock in the plan to hitch their daughter to Mardian (Baron Hermanto), whom they believe is of good stock and from a good family. As we will soon see, that's not the case!

What the parent's couldn't have foreseen is that the cat they think chowed down on their unwanted future son-in-law is actually a shapeshifting creature with magical abilities named Datuk Panglima Kumbang (Gino Makasutji) and the tongue bath he'd given Sembara has completely healed / revived him. Datuk, who also goes by the name Tiger Man, has been assigned to help aid Sembara by the wizard. He also passes along a special ability that enables our hero to hear voices from afar in the wind, like Farida grieving for him back in her home and further instructions from the wizard.
Ki Jabat swings back by on his volcano rock long enough to send a boulder after Sembara, which forces him into a cave. There, he finds a giant disembodied arm lashing an old woman with a "lightning whip." He's able to rescue the woman and get the whip away from the arm, which becomes another tool in his arsenal. Next up, he's trapped inside some glass box that looks like a giant ice cube, which he easily breaks out of using his new whip. This grants him a crystal that he can use to form similar cages around his opponents. After inhaling in some smoke, he's then given the "fog blanket" power that enables him to transform into fog to sneak into tight spaces, like under doors and through keyholes.

After being gone for quite some time (dig that tropical version of time lapse using banana-ripening) but with his training regime now complete, Sembara returns to his village, where he's greeted by his mother (Nani Widjaja), and his best friend, Bachir (E.K. Soemadinata). However, he's shocked to discover that Farida, who had promised to wait for his return, is now set to marry Mardian. Unbeknownst to him, Farida's parents have given her a black magic concoction that's made her swear him off in favor of Mardian. Confused and defeated, Sembara returns home, but vows to find out exactly what's going on.
Immediately following the wedding ceremony, Farida is not only horrified to discover she's now married to Mardian, but has even more reason for alarm when her honeymoon turns into a horror show and her new groom suddenly makes a werewolf-like transformation (!) into full-fledged tiger in their bedroom! While she manages to escape, her mother Rosmina isn't so lucky. The tiger attacks and bites her before escaping into the woods. Now infected with the tiger virus herself, Rosmina also transforms into a cat and runs off.
After murdering a young woman by a lake, Mardian finds himself seeking shelter in a huge, seemingly-abandoned, gated mansion, which very well could be the most brightly lit and inappropriately dressed "old dark house" of all time. Destroyed furnishings in one room reassemble themselves before cackling, ugly witch Mak Lampir (Farida Pasha) makes her presence known. She informs him that she's merely the caretaker there and the home is actually owned by Nyai Kembang (Yurike Prastica). Trapped in a cellar with rats and skeletons, Mardian decides to go through with a blood pact quickie "marriage" to Nyai Kembang. Unbeknownst to him, there are actually sort of two Nyai Kembang's. One is the dead Nyai, a bloodless though well-preserved corpse who lies in bed awaiting a blood transfusion that will return her to life and the other (the one Mardian has been interacting with) is her wandering spirit.

Mak Lampir manages to hypnotize not only Mardian but also Farida, who she lures to the mansion because she needs fresh virgin blood for a ceremony. The witch chains them both up in a hidden underground room / torture chamber / sacrificial altar that can only be accessed by going through a Jacuzzi bath (?) There, she introduces them to the skeletal remains of both Nyai and her former lover, Adolf Peter (Muni Cader), while a giant stuffed bat with glowing eyes sits and squawks in the background (!) This leads to an attempt to transfer souls from the deceased to the new hosts, but it's all interrupted by our hero, who engages in a lengthy and wild kung fu fight with the witch that's better watched by you than described by me!

This nearly 2-hour-long Indonesian whack-fest starts out as your standard fantasy-adventure 'hero on a quest' type of movie and then becomes a star-crossed lovers family drama of sorts and then gets all were-catty before finally settling into a haunted house romp and the whole thing is punctuated with frequent martial arts, sword fighting and flying-around-and-flipping-in-the-air-on-visible-wires scenes with all kinds of fun little touches tossed in along the way. It's quite something... something every bit as entertainingly zany as it is mind numbing!
The ads for this one promised a "Super colossal film with sophisticated tricks processed in Hollywood (America)!" In reality, the effects are nowhere near up to late 80s Hollywood standards. Visual effects look more like what you'd see in very low budget films produced at the beginning of the previous decade. Not surprisingly, the credited U.S. studio (Image Transform Inc. out of North Hollywood) had been around since 1971. There's also some very crude and poorly-executed stop-motion work (a decomposing corpse with chunks of pink Play-doh flaking off is especially bad) and hilariously unconvincing stuffed panther and tiger heads mixed with newly-shot tiger footage and stock footage for the cat stuff. However, it's all rather fitting in this particular context, with the wonky fx being a good fit for the the slapdash nature of the rest of the film. Robert Santoso also deserves a shout out for doing a nice job with the action and fight choreography here, especially in the final fight scene. 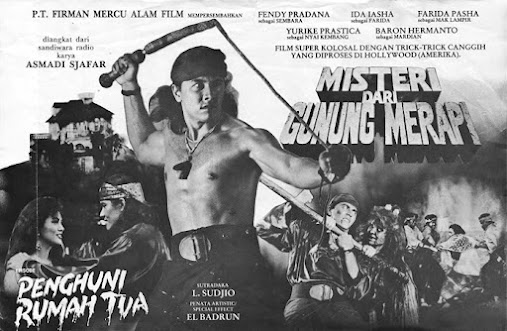 Based on a radio play of the same name by Asmadi Syafar (who is given a story credit here), this was followed by two immediate sequels. The first of these; Misteri dari Gunung Merapi II (Titisan Roh Nyai Kembang) / "The Mystery of Mount Merapi II: Incarnation of the Spirit of Nyai Kembang)" (1990), is announced in the end credits and features most of the same principle characters seen here. The second sequel was Misteri dari Gunung Merapi III (Perempuan Berambut Api) / "Mystery of Mount Merapi III: Fire-Haired Woman" (also released in 1990). All three were made by the same director, writer, producers and crew. There was also a Merapi TV series that lasted three seasons, spread out from 1998 to 2005, as well as Merapi books released.
Cast standout Pasha, who seems to be having a ball playing the evil witch, was able to reprise the role in both sequels, the TV series and in the 2012 horror-comedy Mama Minta Pulsa (2012). Sadly, she passed away of complications from COVID-19 early last year at the age of just 68. There were numerous VCD and DVD releases for the title, but only in Indonesia to my knowledge. None of them come with English subs.
★★★
Posted by The Bloody Pit of Horror at 6:43 PM No comments: