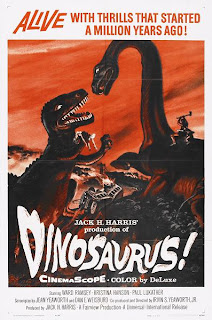 On a Caribbean island, a construction crew using dynamite accidentally disrupt a frozen (?!) area right underneath the water. Located inside the rubble are two perfectly-preserved dinosaurs (a tyrannosaurus rex and a brontosaurus), as well as a Neanderthal man (Gregg Martell). The crew put their heavy equipment to good use dragging them up to the beach to thaw out. but during a thunderstorm later that same evening, all three of the prehistoric beasts are resurrected via lightning. The brontosaurus wanders around eating bananas and foliage, the caveman clumsily tries to relate to our modern world and the t-rex goes on a destructive rampage. Construction supervisor Bart Thompson (Ward Ramsey), his assistant Chuck (Paul Lukather), their lady friend Betty (Kristina Hanson), a dino-loving little boy named Julio (Alan Roberts) and a fat dump truck driver named - you guessed it - Dumpy (Wayne Treadway), are amongst those setting out to stop the dinos, as well as greedy bad guy Hacker (Fred Engelberg) and his two thugs. Meanwhile, the native islanders stand around not looking too impressed with anything.
.
This one's from the same team (director Yeaworth and producer Jack H. Harris) who brought us THE BLOB (1958) and 4D MAN (1959). It's corny and badly acted, the characters are thinly drawn, boring and annoying, the dialogue is terrible and the work in front of screens (were they even called green screens back then?) is pretty awful. Still, this has a few things working in its favor. For starters, it's very nicely photographed by Stanley Cortez and the 2002 DVD release from Image Entertainment does his vivid work justice. Secondly, the special effects are pretty delightful. Sure, they haven't dated well at all and Harryhausen's work around the same time is far superior to anything you'll see here, but there's just something charming about the combo of cheap plastic model work and crude stop motion animation used here. Some of the "highlights" are the t-rex versus bronto fight, the t-rex crushing a tour bus and, of course, the finale where our hero fights the t-rex with a steam shovel on a cliff. I'm sure 1960's monster-movie-loving kids loved it.
. 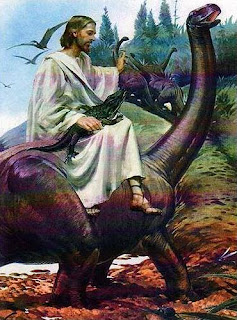 Q: What do Jesus and little Julio have in common?

Some of the scenes with the caveman (who is actually very well played by Martell, in the film's sole standout performance) are also mildly amusing. He gets scared by a woman wearing a mud mask and the sound of a flushing toilet, chops up a radio with an axe, tries to eat a piece of wax fruit and even puts on a pink dress at one point. A cross-dressing cavemen? That's gotta be a first. And the scene where the caveman and little Julio ride the benign bronto is about as funny as the stegosaurus with a saddle on its back at the Creation Museum in Petersburg, Kentucky. Also worth noting are the surprising number of similarities between this and JURASSIC PARK (1993). The score is from Ronald Stein and the director's wife, Jean Yeaworth, co-scripted based on an original idea by Harris.