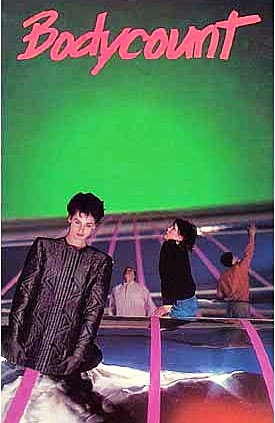 
After leaving a bar (where a band called The Razor Blades sing the hilarious “Body Count” theme song), a young couple end up getting gunned down on a playground. The serial killer responsible for that double murder has been leaving numbered cards with each victim, which keeps track of his overall body count. The top suspect in the murders is taxi driver Mark Stephens (James Lukie), who seems to always be at the wrong place at the wrong time. A red taxi looking just like Mark’s was seen near the location of the first murder, he’s emdebted to a black thug named Charley (Lance K. McIntyre) who lent him money to buy his car and is saddled with temperamental model girlfriend Nanette (Sherry Lee), who’s always bitching about money. After dropping off a weird old woman at a cemetery, Mark runs across Laurie (Christine Manning) – the sister of the last victim, who came all the way from Vancouver and now doesn’t have a place to stay. Or so she claims. Mark invites her to come over to his place, they have sex and then she disappears the next day. Investigators, led by police sergeant Corey Jackman (Jonathan Knapp) and his partner Al Vinetti (Paul Amato), keep harassing Mark, but they’ve got the wrong man tagged. Radio reporter Kirby (James Patrick Knapp), who has been covering the murders, also lends them a hand.

The real killer (revealed early on so I’m not giving anything away here) is Paul Carter (Jonathan Potts), a clean-cut, virginal college student lashing out at a world that has fucked him over. He claims to have no family, rents a room from kindly Mrs. Potts (Ilene Cummings), finds out he has inoperable cancer during a doctor’s check up (blaming it on growing up near a factory called “Diamond Chemicals”) and lashes out by going out and shooting down random people with his magnum. In one scene he shoots another taxi driver in the back of the head. In another, he perches outside a public zoo and aims his scope at babies and little kids running around. Despite his odd behavior, Paul finds himself an understanding girlfriend in Jennifer (Cynthia Kereluk), whose parents abuse her. She doesn't mind that Paul can’t “perform” and wants to skip town with him.

It was filmed around Ontario, Canada. It was shot on video. It’s nearly impossible to find. I do have to give these people credit for at least trying to come up with something decent on a nonexistent budget. There’s some level of competence here when it comes to story structure. However, everyone is defeated by a talky, cliché-ridden script where there’s absolutely nothing interesting or original about either the characters or the situations they find themselves in. The excitement quotient is nil, the videography is flat and most of the actors are mediocre, while a few others are flat out terrible. In other words, not many people are going to want to watch this one, let alone seek it out. It also seems to "borrow" many of its ideas from the highly superior Targets (1968). Watch that one instead.

Strangely, there were no less than three horror films titled (or re-titled) Body Count that were made within a year of one another. Other than this one, there was the Italian campground slasher from 1986 directed by Ruggero Deodato (which was originally titled Camping del terror) and Paul Leder’s murders-for-the-inheritance flick (which was also called The Eleventh Commandment).