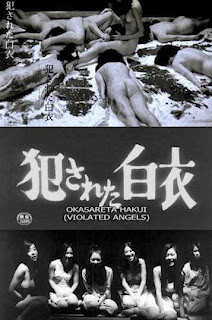 
A long, silent montage of a man admiring a painting and various close-ups of female body parts opens this very misanthropic pinku eiga ("pinky violence"); one of the earliest examples of its kind. The pinku were Japanese films that began springing up in the mid 60s that contained adult content and nudity. These films covered just about every known genre. The only constant were lots of bare breasts and asses. Full frontal nudity and even glimpses of pubic hair on either gender were not allowed, and this remained a constant throughout the years even in Japan's roman porno, their answer to adult films, which were strictly soft core in nature. Though many sources have this one listed as being just a drama, it's actually one of many examples of a pinku horror film and was clearly inspired by American mass murderer Richard Speck, who'd made international headlines just one year before this was made. On the evening of July 14, 1966, Speck, a rapist and alcoholic who already had a very long criminal rap sheet prior to the murders, had invaded a boarding house and killed eight student nurses from South Chicago Community Hospital. He tied his victims up in one room, led each one out one at a time, raped some of them and then strangled or stabbed them. A ninth proposed victim managed to survive the ordeal by wiggling underneath a bed and hiding and Speck's "Born to Raise Hell" tattoo was a dead giveaway when it came time to apprehend him. Violated Angels is more or less a re-telling of this horrific night, though reducing the number of victims by a few.

It's late at night at the White Lily Nurse Dormitory as a handful of nurses awaken from their sleep to spy on a couple of others ladies making love in another room. One of the girls spots a man (Juro Kara) sneaking around outside their dorm and informs her friends. They all run out, bring him in and then let him spy on the action through a peephole. The man snaps, opens the door, pulls a gun and then shoots one of the women on the shoulder and leaves her bleeding to death on her bed. All of the other nurses are then held at gunpoint. One girl who tries to escape and won't stop crying is shot dead. Another strips off her clothes and offers herself to the psycho. She's led into an adjacent room and, when the man cannot perform sexually, he fires the gun into her crotch. With just three women left, two are tied up and the third - who seems catatonic - is left sitting in the corner. The man takes another of the nurses into another room, ties her to a pole, strips off her clothing and then slashes her to death with a straight razor. The older head nurse (Keiko Koyanagi), who spends a good deal of her time pleading for her life and trying to convince him that he doesn't want to kill nurses because they're "angels in white dresses," is finally silenced with a gunshot. The only remaining girl (Michiko Sakamoto) is the one he didn't even bother tying up. She's surprising calm given the circumstances; even after he tells her he wants to paint her body in blood.

Near-plotless, this doesn't bother fleshing out the victims much and spends more time trying to make us identify with the killer via various aural and visual cues. The opening montage is full of scrappy implication; bombarding us with images of feminine sexuality in the forms of nude paintings, nude magazine layouts and nude body parts. This sequence finally ends with the killer firing a round of ammo from his pistol at the beach. The man's impotence is later made clear when he's unable to perform sexually for one of the ladies and his firearm is clearly the only way he's able to unload, so to speak. He hears echoing laughter, crying and the wind blowing, has visions of each of the girls naked, keeps asking them why they're looking at him (Speck himself had a lifelong fear of people staring at him) and fantasizes they're all naked and laughing at him. When one of the victims asks why he's doing all of this, he simply says "I don't know." The perplexing ending of this mostly black-and-white film explodes with full color moments as well as some tinted scenes and shots of the coastline, water, the military and (I think) wartime activities. I think these are to allude to Speck's later career choice as a seaman, a job he found rather frustrating.

Though much of this is grueling to watch (and there are shots that seem to linger on a bit too long), this material is imaginatively and artistically presented and the ending is rather haunting. It's a good example of providing the audience exploitative thrills while also making an otherwise interesting film to go along with it. The full running time is just 57 minutes. 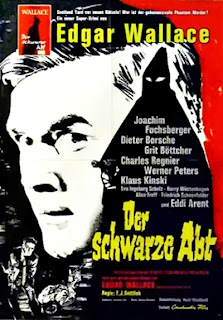 
I usually like to start out my reviews doing a cursory overview of the plot and characters, but I'm really going to have to restrain myself here. I could probably do a write-up as long as the Edgar Wallace novel this is based upon if I don't watch it. A very complex mystery that requires a viewer's full attention, this is filled with scheming, duplicitous characters who are all linked together in a variety of different ways. Each has a past and each has their own possible motive for murder. The events take place in and around the Chelford Manor; a huge estate owned by the paranoid and possibly insane Harry Chelford (Dieter Borsch) and rumored to have two-and-a-half tons of gold hidden somewhere on the grounds. The film opens with the murder of a man lurking around the abbey, who's stabbed in the back by a killer dressed in a black abbot's robe. Harry was just taking a midnight stroll around where the murder took place. His administrator Dick Alford (Joachim Fuchsberger) found the body... and left behind his pipe at the scene of the crime. Ex con butler Thomas Streisser (Klaus Kinski), who's now going by the alias Thomas Fortuna, also stumbled upon the body... and Dick's pipe next to it. These three are just the tip of the iceberg as far as suspects are concerned.

Scotland Yard Inspector Puddler (Charles Régnier) and his goofy assistant Horatio W. Smith (Eddi Arent) set up shop inside the Chelford home until the crime is solved and meet a host of potential murderers. Harry is engaged to be married to the much-younger Leslie Gine (Grit Böttcher), who's actually in love with Dick (and vice versa). Harry really has nothing to do with her ("Love is for people who lack the ability needed to face reality.") and just wants her to produce an heir. She claims she's only agreed to the loveless union because her lawyer brother Arthur (Harry Wüstenhagen) is in dire need of money. Harry's former private secretary (and lover) Mary Wenner (Eva Ingeborg Scholz) once almost became the Lady of the estate, until he tossed her aside. Now determined to get her hands on the treasure, she's discovered the whereabouts of the gold but isn't going to squeal until Harry and Leslie are split up so she can marry him and become the lady of the estate. Meanwhile, Fabian Gilder (Werner Peters), pudgy head office clerk at Arthur's firm, discovers his boss has falsified documents and forged signatures pertaining to the Chelford estate. Having already skimmed 160,000 dollars from the company using a variety of false names, Gilder decides to blackmail Arthur. What does he want? Well, he's also in love with Leslie and wants to marry her...

So basically, Harry is set to be married to Leslie who is actually in love with Dick but Fabian wants to marry Leslie and Mary wants to marry Harry. Aside from the romantic complications, there's are a lot of business intermingling I won't go into detail about. The less said about the mystery the better. Horror fans can feast on atmospheric, foggy scenes set in a cemetery and forest, a bat-filled secret tomb containing pieces of a treasure map, the (maybe) ghost of the (supposedly) dead former lady of the manor wandering the grounds and, or course, many sightings of the black abbot phantom figure. And, of course, several more murders as the suspect roster is whittled down. Though often confusing and hurt some by Arent's irritating comic character, it's well-acted and very handsomely photographed. Some of the camerawork is pretty offbeat (like an upside down shot flipping around) and there are some great catacomb sets used at the very end.

Something Weird originally released this on VHS and there's a restored German DVD from Kinowelt (which has an English subtitle option). Director Gottlieb directed numerous other Wallace adaptations (like the following year's The Phantom of Soho) and the non-Wallace vampire flick Lady Vampire (1975), which is difficult to find these days.