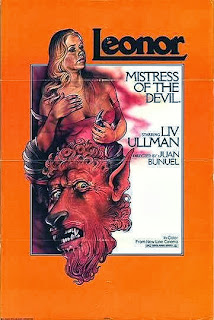 
A French / Italian / Spanish co-production, this (sort of) vampire tale came from master surrealist Luis Buñuel's son Juan, who'd previously made the surreal fantasy The Woman with Red Boots (1974) starring Catherine Deneuve. It was based on a story by 17th Century writer Ludwig Tieck (no less than seven different people are credited with the adaptation for the various releases) and is well-budgeted, has several notable names in the cast and good period detail / production values but apparently wasn't very well received in its day (Leonard Maltin, for instance, gave it his lowest possible "BOMB" rating in his book), which may account for its obscurity nowadays. Leonor (Liv Ullmann) is crushed beneath her horse and, as a result, her rib cage has been splintered into her vital organs. She dies soon after the accident and is immediately bricked up in her tomb. Leonor's husband, wealthy and powerful nobleman Richard (Buñuel Sr. regular Michel Piccoli; also a producer), has a hard time coping with all of this. He slays his dearly departed's horse for revenge and tries to put this all behind him by taking a new wife; the young and beautiful peasant girl Catherine (Ornella Muti), before his wife's body even has a chance to get cold. 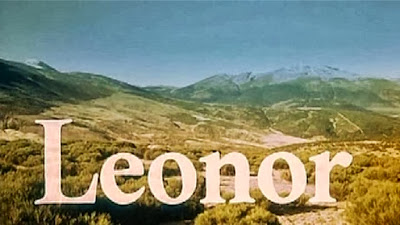 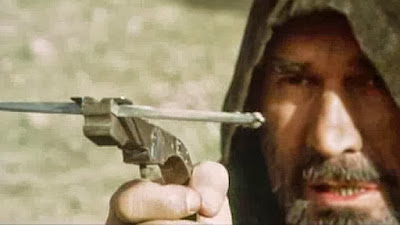 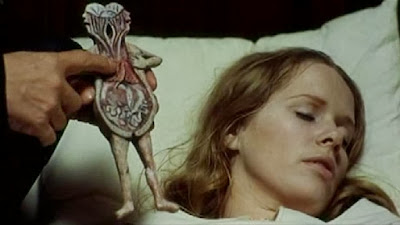 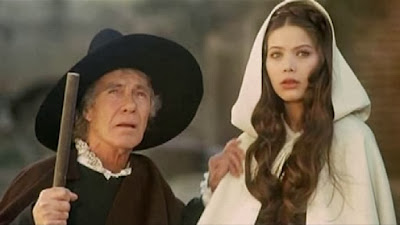 Richard was in such a hurry to move forward and forget, he didn't go about properly blessing his late wife's tomb, nor did he give himself adequate time to mourn. Despite having a lovely new bride, Richard is despondent, cold and somewhat cruel to poor Catherine at first and doesn't even want her to be in the same room with him when he eats. Eventually, he does warm to her and they have two sons. Still, he just can't get Leonor out of his head. He constantly sees visions of her walking around, starts drinking a lot and frequently snaps at Catherine and their kids. Ten long years after her death, Richard is still pining for her. He goes to her tomb, busts down the wall and refuses to leave. Right outside the tomb, he encounters a strange, intense man (Satan?) who warns him numerous times to "Let the dead rest," but also informs him that "The gap between life and death may never be closed, but deep as that gap is it sometimes can be bridged." He tells Richard that if he wants Leonor back more than anything in the world, she will come back. And that she does. Leonor appears in the corner of her tomb, cold and confused, but hey, at least she's alive. 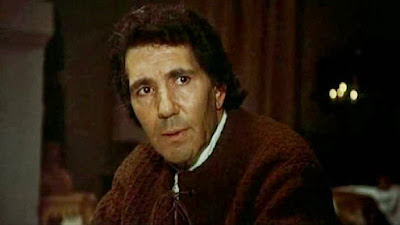 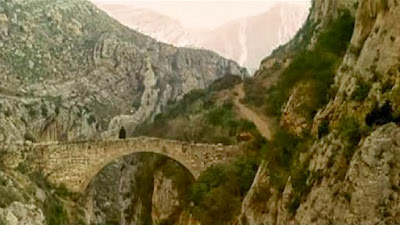 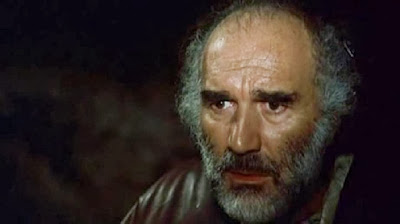 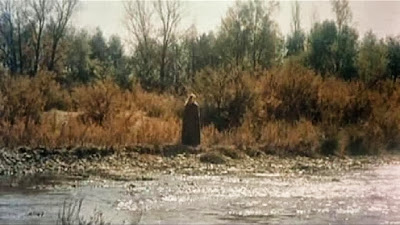 Richard goes back to the castle, stabs Catherine to death and sinks the body in a well. He then brings Leonor in and announces her as the new mistress; telling all of those servants who've been with him for years that they're not to ask any questions. Many recognize her, however, but the Leonor they knew a decade earlier isn't quite the same Leonor who's miraculously returned to life. She acts aloof, she's weak, she's cold to the touch, her skin doesn't feel quite right and she refuses to be affectionate with Richard. Leonor heads outside for a walk, encounters a young girl and tells her a story; which ends with the little girl dead in her lap. Leonor returns to the castle rejuvenated, happy and ready to be passionate with her estranged husband. It isn't long before thirteen children have died or disappeared in the area, which leads the superstitious villagers on a witch hunt. A young lady (Inma de Santis) accused of being a witch is tied to a stake, has a keg of gun powder tied to her neck and is set on fire. 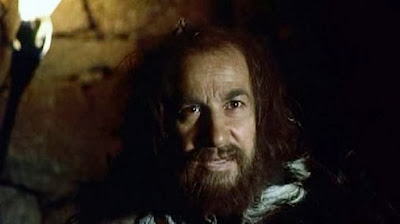 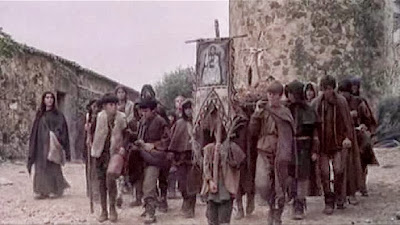 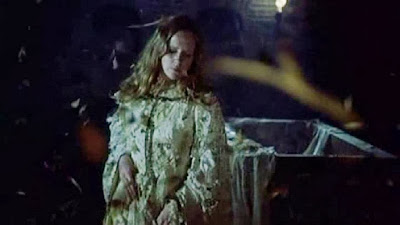 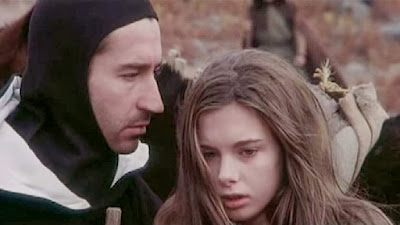 The villagers eventually set a trap; a young girl tied to a tree, for whomever the killer may be. Leonor falls into it. They unsuccessfully attempt to kill her, but Richard steps in before they can. Because their safety is threatened and people keep turning up dead, all of the villagers and the castle staff flee the area, which is really saying something considering the Plague has been fast-moving across the countryside and they're putting themselves at great risk leaving. Pretty soon, only Richard, Leonor and Richard's two young sons, Matthew and Gregory, remain... and a vampire's gotta eat something, right?

Slow, vague and filled with arty pretensions, this has all that a healthy budget can buy. The art direction, settings and costumes all adequately bring to life the Middle Ages setting, and the outdoor shooting locations (crumbling tombs and castles; rocky embankments, dusty landscapes with dead trees, an old stone bridge overlooking a huge ravine) are pretty breathtaking. The casting is good and even the English-language track is well-recorded. Cinematographer Luciano Tovoli (who'd later shoot SUSPIRIA) and composer Ennio Morricone, who contributes a truly powerful score, both do very nice jobs. 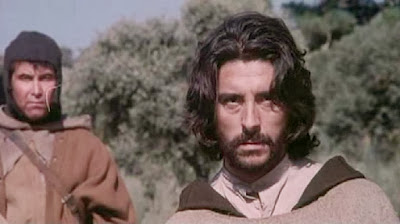 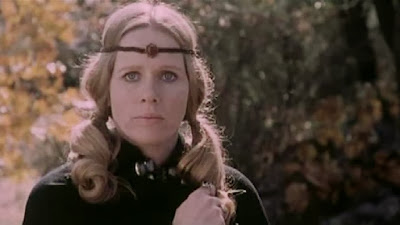 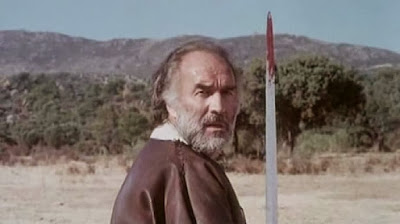 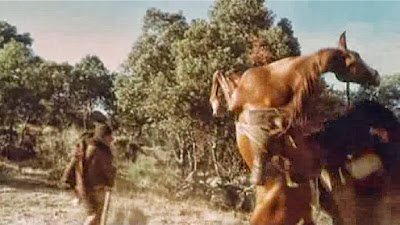 Because this clearly aspires to be more than your average horror tale, but instead a classy / romantic one, all of the supernatural aspects are handled with restraint, subtlety and ambiguity. Though it's pretty clear what Leonor has become she bears no fangs and shows no signs of having supernatural gifts. There are also no traces of bite marks or anything on her victims, though she does appear to be feeding from necks in several shots. Leonor isn't even back amongst the living until the final 30 minutes, after we've sat through about an hour of Richard's incessant brooding over her. And therein lies one of the major problems with this one; all of the production quality in the world cannot make up for a routine, predictable screenplay. Nothing really happens that hasn't already been done numerous times before. At its core it's just your typical tale of obsessive, unhealthy love. And what love that's true love isn't obsessive and unhealthy? It does not have anything to say beyond that. Not that I mind per se, it's just that the people who populate this film are so morose and miserable, and there's no humor, warmth or real depth to make us care about any of them. 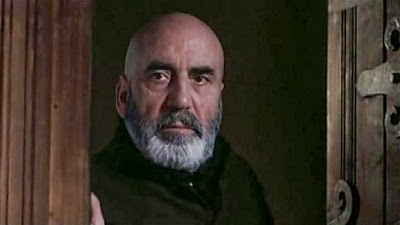 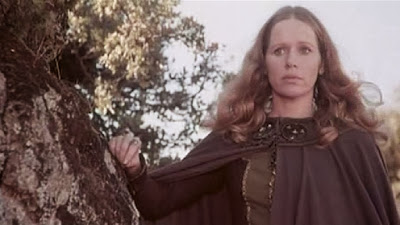 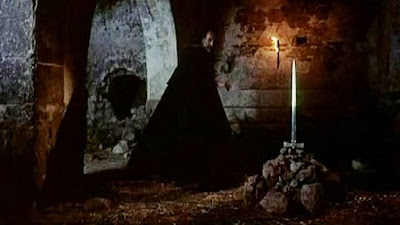 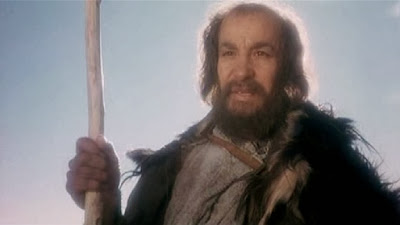 Despite the Buñuel pedigree and some internationally known stars, there's not enough substance here for it to really work as a serious film, not enough sex and violence for it to work as exploitation and not enough terrifying content for it to work as a horror film. As a result, it's never been able to find much of an audience. In America, it received a brief theatrical release in 1977 from New Line; reduced from its original run-time of 94 minutes to just 85 and rated PG. They titled it Leonor: Mistress of the Devil and gave it poster art clearly hoping to rope in fans of The Exorcist and The Omen. It didn't work. Subsequent VHS releases failed to gain it much of a following either and there's currently no DVD release in America (though discs have been released in Spain and Italy). 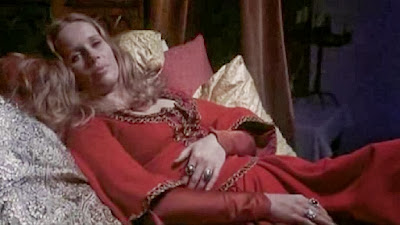