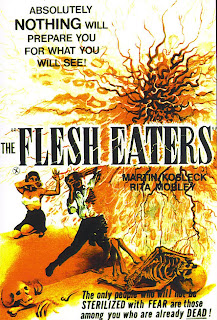 Pampered, bitchy, alcoholic actress Laura Winters (Rita Morley) needs to get to Provincetown in a hurry to prepare for a new stage production. Her secretary and personal assistant Jan Letterman (Barbara Wilkin) pays pilot Grant Murdoch (Byron Sanders) three times his normal fee to fly them there, despite warnings of a nasty tropical storm heading their way. An hour from their destination, the engine freezes and they're forced to land on a small, uncharted island until the bad weather clears. Almost immediately, they stumble upon German marine biologist Professor Peter Bartell (Martin Kosleck), who's there doing research on aquatic life (so he claims) and offers them food and shelter in his tent until they're able to leave. But Bartell is up to more devious things. He's a former Nazi who's carrying on some kind of experiment on living, glowing crystaline parasites that live in the ocean and like to feast on human flesh. Using powerful electric currents, he also plans on transforming all of the little critters into one gigantic monster. After Laura, Grant and Jan find a beach full of dead fish bones and a human skeleton, Bartell unties their plane and pushes it out to sea; trapping the new visitors there until he has a chance to dispose of them.

Considered by some to be one of the first American gore films, this was filmed several years before BLOOD FEAST (1963), though it wouldn't be released until a year after. And yes, it is indeed quite bloody at times. There are scenes of the parasites eating through a leg (and then getting cut off with a knife), boring their way through a stomach and stripping bodies down to skeletons in seconds, plus some icky moments involving the monsters and a blood-oozing empty eye socket. Though the amount of on-screen grue instant distinguishes it, THE FLESH EATERS also deserves credit in many other areas. As a matter of fact, there's enough positive here, and such a Corman-like efficiency to the whole thing, that I wouldn't hesitate listing it as a great example of how to create much from very little.

For starters, it's surprisingly well-written by early graphic novelist Arnold Drake. Drake has not only come up with a clever and interesting premise, but also created colorful characters and given them very witty, sometimes hilarious dialogue that make even the talkier moments a pleasure to watch. Good lines without a good cast might go waste, but thankfully most of the actors here do a fine job with their roles, particularly Kosleck and Morley. Ray Tudor also has a memorable supporting role as a goofy beatnik who washes up onto the island just when things start getting nasty. Nearly the entire film takes place on a lone stretch of beach, but the beautiful black-and-white cinematography and interesting shot compositions make the absolute most of the location and adequately pull off the desolate island feel. That's even more impressive when you take into consideration this was filmed in Long Island.

Director Arnold (who also shot the film under a pseudonym) would unfortunatley never make another genre film and passed away in 1970. Barbara Wilson (TERROR IN THE MIDNIGHT SUN) appears during the opening sequence. Radley Metzger was the editor. The Dark Sky DVD is an excellent quality print and contains a nazi experimentation sequence removed from the finished film, as well as outtakes.