Lawyer Kenneth Bradshaw (Harry Reems) has just returned from vacation in Japan. He goes to visit his fiancee Faye (C.J. Laing) and after a ten minute romp in the bathtub and on bed, he leaves early in the morning to work on some briefs. On his way out, he bumps into a strange man carrying a briefcase and cane, who seems in a hurry. Ken goes to work. The stranger (Zebedy Colt) goes to visit his girlfriend. With pantyhose over his face, he busts into her apartment and demands she play doctor with him. He makes her strip off her robe, puts tape over her mouth and hogties her while talking in a childish voice and singing "Ring Around the Rosie." Then he decides to take her temperature but forgot his thermometer. I'm sure you can use your imagination with that one. After he's finished with that, he throws her on the floor, starts speaking in his mother's mannered voice, alternates between whipping her ("Naughty girl!") and whipping himself ("Bad boy!"), smacks her, beats her head off the floor and tells her she deserves it. Finally, he puts her out of her misery by cutting her throat (the blade is located inside his cane).

Forgetting his briefcase, Ken has to return early and when he does he finds Faye dead. Thankfully the killer had dropped a matchbook outside that says "21 Club. 'Artie' After 9!" on it, which at least gives him his first clue. After being questioned by Inspector Allen (an uncredited Robert Kerman), Ken goes to a bar to drown his sorrows. Two girls there offer up their, uh, services, to help him get his mind off things. Afterward one of the girls tells Ken if she were him that she'd go buy a guy and hunt down the fucker who killed his girl... and that's exactly what Ken does. He keeps tabs on what's going on via news broadcasts and learns that Club 21 is a gay bar but there's no one named Artie there. Still not over his girlfriend, he goes to visit Faye's compassionate neighbor Alice ("Sue Franklin" / Nancy Dare), who cooks him dinner and then, uh, comforts him. Hell, his fiance's not even two days dead yet and he's already nailed three chicks. I guess her getting offed might not be such a bad thing after all.

Meanwhile, the psycho does poppers, puts on lipstick and a jock strap and then busts into a black couple's apartment with a gun. He tells them "I want to see your naked bodies playing nice games!" The girl throws her panties at him and yells "Smell it, baby! I know you wish you could have this!" At gunpoint he forces them to have sex while barking out various orders in his childish voice. The girl (who is a great little actress by the way) asks, "Is that what you want to see you dirty mother fucker?" He then forces the guy to flip her over and "bite her little assy." When he refuses to bite off her nipple, he's slashed to death. The killer and the girl get in a struggle on the couch. Her wig falls off and then he slashes her throat and then castrates the dead guy for good measure. Ken then decides to hit the streets to hunt down who the press has dubbed "The Sword Killer." Mid-chase, the psycho yanks a woman off the street (Terri Hall) into an abandoned building. Can Ken get to them before he claims his next victim?

Clearly taking its cue from the hit DEATH WISH (1974) in more than just title, this very unpleasant hard X film has built up a reputation over the years as a sick classic. So does it actually live up to its reputation? For the mosst part, I'd say yes. At least if you're like me and not well versed on this kind of stuff. The attack scenes are very twisted, effective and made even nastier by the inclusion of hardcore sex. Still, they wouldn't have near the impact they do if not for the effectively deranged performance from Zebedy Colt as the psycho. Colt - a New York stage actor and gay cabaret singer who moonlit in straight porn because the parts were better - goes all out in this role: crying, screaming, laughing and even changing up his voice whenever necessary. If this same performance was in an R-rated film, it would probably be lauded. On the down side, all of the actual death scenes are ineptly staged, with the weapon clearly not making contact with the body. Reems' straight sex scenes are a bore, too, but that's why they invented a fast forward button. Still, the film would have obviously been better with more Colt and less Reems. 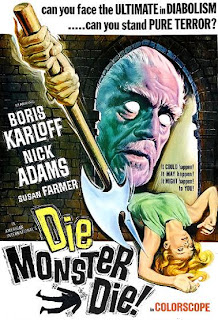 
Though Roger Corman's The Haunted Palace (1963) is still to this day grouped into the director's eight-part Edgar Allan Poe series, it was actually based primarily on H.P. Lovecraft's short story "The Case of Charles Dexter Ward." Despite how it was initially promoted, Palace was in fact the very first feature-length attempt at bringing Lovecraft to the big screen. Die, Monster, Die! (UK title: Monster of Terror) was the second attempt and is based on Lovecraft's wonderful short story "The Colour Out of Space." Screenwriter Jerry Sohl has altered many things from the story and added new ideas and characters, but he at least honors the general premise of the tale here. Director Haller, making his directorial debut, had previously done splendid economy-class art direction on many of the Corman-Poe films (including Palace) and brings that same kind of attention to detail and atmosphere to this one.

Honoring a request for a visit from his girlfriend's mother, American Stephen Reinhart (Nick Adams) arrives via train to the small British village of Arkham. Once there, he's unable to get a taxi ride or even rent a bicycle to transport himself to his destination. Seems the folks round those parts have a problem with the same family Stephen is planning to visit. He's forced to walk a good piece to his destination. Along the way there, Stephen must ignore no trespassing signs everywhere, sidestep strategically placed bear traps and, strangest of all, pass by a huge empty crater and a forest full of charred trees. Upon arriving at the Witley home, Stephen is given a cold, rude reception by wheelchair-bound patriarch Nahum (Boris Karloff), who immediately asks him to leave. His girlfriend Susan (Suzan Farmer) greets him warmly, however, and takes him upstairs to meet her mother Letitia (Freda Jackson). Mum's not doing very well it seems.

Not only is Letitia sickly and bedridden, but she's also strangely light-sensitive and refuses to be seen. She warns Stephen about the family history (Nahum's father apparently dabbled in Satanism) and tells him her maid went crazy and has since vanished. She also begs Stephen to take her daughter out of the home. Because of her mother's illness and her father's erratic behavior, Susan refuses until she finds out just what is going on. At dinner that evening, servant Merwyn (Terence de Marney) - forced to wear dark glasses because he's inflicted with the same malady effecting Letitia - collapses and then later dies. Strange screams are frequently heard throughout the home but seem to have no source and a shrouded figure lurks the grounds brandishing a knife. Stephen goes to a local doctor (Patrick Magee) for help, but he's a drunk who has been driven half mad himself by whatever's going on at the Witley estate and is of no help.

If you're familiar with the story or have seen any of the later film adaptations, such as THE CURSE (1987) or the recent Italian adaptation Colour from the Dark (2008), then you already know that a fallen meteor is responsible for everything odd that's been occurring. Nahum keeps a huge chunk of it down in the cellar and has it spread throughout his greenhouse and who knows where else. Enough exposure to the radioactive alien mineral leads to excessive growth in plants (plus enables them to attack) and madness and mutation in both plants and animals.

Despite the old school Gothic setting (large castle, fog-shrouded forests and graveyards), this seems strangely modern at times in terms of character actions, pacing and sound design. Haller and his crew make it all quite atmospheric, there are some interesting aural and light effects used at the finale, nice use of matte paintings throughout, some mildly icky make-up fx (such as a face melting down) and an interesting metallic-looking meteor monster that shows up at the very end. It runs just 75 minutes.