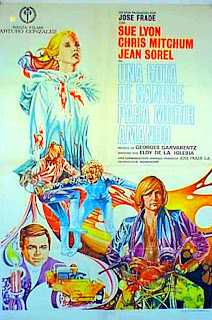 A truly oddball (and tough to categorize) little film, this revolves around both a serial killer ("an unknown killer of young people") and behavior modification experiments being conducted to help reduce criminal activity. It's set sometime in the future and the appropriate look and feel are achieved through bizarre set design and even more bizarre new broadcasts (where the announcer expounds on the virtues of "the perfect race") and commercials (including one for something called "Blue Drink;" "the natural product of nature!"), which are constantly playing on TV sets throughout the film. Even stranger are the amount of Stanley Kubrick film references on hand. During one bizarre sequence, four whip-wielding thugs dressed in black leather outfits and red helmets arrive at an ultra modern house and terrorize the family living there. They trash their furniture, make the husband bark like a dog, whip the wife and then drag both of them off to separate bedrooms to rape them. Yes, this is certainly copying the famous home invasion scene from A CLOCKWORK ORANGE (1971), but the director has absolutely no problem stating his sources. The couple have just sat down to watch Kubrick's film before they're attacked!

Elsewhere, well-scrubbed blonde Ana Vernia (Sue Lyon), who inherited much from her deceased parents and lives alone in a gated mansion guarded by dogs, has just won a special award for completing her "health officer" studies. Her friend, Dr. Victor Sender (Jean Sorel), a professor in clinical psychotherapy who'd no doubt like to be more than just friends with Ana, thinks she's smart enough to be a doctor. Ana however claims that she's not as much interested in the technical aspects of health care as she is the compassionate ones... which might explain why she's something of an accomplished serial killer! Because her victims are all good-looking young men between the ages of 17 and 25, the press and police have it all wrong that the killer responsible has "tendencies toward homosexuality." Because of their erroneous assumptions, Ana easily gets away with her 'caring nurse by day / murderess by night' routine. That is, until someone accidentally catches on to what she's doing.

Ana utilizes a wide variety of disguises to help lure men into her clutches, seduces them and then stabs them through the heart with a scalpel immediately after sex (and listening to their heartbeat). During one scene, she dresses up as an old woman and goes to a brothel, where she hires over-the-hill underwear model / gigolo Bruno (Charly Bravo) to accompany her home. In another scene, she dresses up as a lesbian in a short black wig and suit, goes to a gay bar and picks up a young guy (Alfredo Alba) who seems to be unsure of (or just fighting against) his sexual orientation. Meanwhile, David (Christopher Mitchum), one of the leather-clad thugs seen in the home invasion scene, has managed to turn all his juvenile delinquent friends against him. Desperate for money, he lucks out in discovering Ana disposing of one of her victims in the river. He sneaks over to her house, watches as she kills another man and then blackmails her to get money and a new motorcycle. Things come to a head at the lab, after David is severely beaten by his gang and is left at the mercy of Ana in the hospital where she works.

The connections to Kubrick extend beyond the droog-like juvenile delinquents and attempted shock treatment cures to criminal impulses (which amusingly backfire during the bloody conclusion), but to the presence of Sue Lyon, star of Kubrick's LOLITA (1962). There are many nods to that film, including a play on the famous sunglasses scene, as well as an actual copy of Vladimir Nabokov's book seen several times.

I'm not even sure what to make of all of this, or what the actual point (aside from those already established in Kubrick's ACO) is, but it's all very interesting to watch play out. de la Iglesia is one of those European directors you hear very little about here in America. He never achieved much notoriety here, and is pretty much only known for the good, though misleadingly-titled, CANNIBAL MAN (1971). However, tracking down copies of his other films has been worthwhile. A gay director, he'd often infuse his films with gay subtext (sometimes subtlely, sometimes more blatantly [as seen here]), and really brought a fresh perspective to many thrillers as a result. See also: THE GLASS CEILING (1971), NO ONE HEARD THE SCREAM (1973).

One of the major letdowns are our trio of lead actors. Lyon, Mitchum and Sorel all act like they don't even want to be here and give wooden, forgettable performances. The cast also includes Ramón Pons as a victim Ana picks up at an auction, Antonio del Real, David Carpenter (THE KILLER IS NOT ALONE) and Ramón Fernández Tejela as David's punk friends, Fernando Hilbeck and Eduardo Calvo.