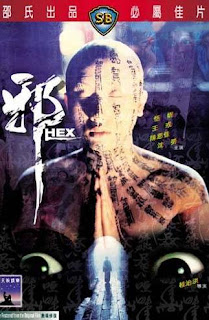 Chun Yu Yeung (Wang Jung aka Wong Yung) is a sadistic bastard. Bitter because he married into the wealthy Chan family during a period of financial decline, Chun Yu treats his poor wife, Madam Sau Ying (Tanny aka Tien Ni), like a dog. He beats her, berates her and spends all her family money on booze, gambling and prostitutes. He's also driven away all of the hired help by treating them badly, which especially sucks for Sau Ying because she's stricken down by a lung infection and could use the extra help. As she sinks into a depression, Sau Ying finds an unsuspecting ally in Yi Wah (Szu Chia Chen), a determined young woman whose mother was the Chan family maid years ago. Yi Wah, who initially stopped in just to visit, sees Sau Ying is desperate for help and decides to take on servant responsibilities. She's subjected to torment from her new master, but stands her ground and refuses to let him bully her.
. 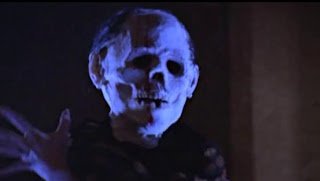 One stormy night, Chun Yu threatens to sell his wife's precious jade bracelet (a family heirloom) and at the end of the fight, the ladies end up drowing Chun Yu. They dump his body in a nearby lake and decide to go about their business. Sau Ying is tormented by nightmares about her dead husband returning to life. A foul smell leads the villagers to drain the lake, but Chun Yu's body is nowhere to be found. Any of this sound familiar? Yep, the entire first half of this film is basically an overwrought exact replica of the French suspense class LES DIABOLIQUES (1955). Once you realize that, it should come as no surprise to discover that Chun Yu and the new maid are actually conspiring to drive the wife mad to get their hands on her money. Their plan works, Sau Ying dies and then her murderers spend the second half being haunted by their victim. 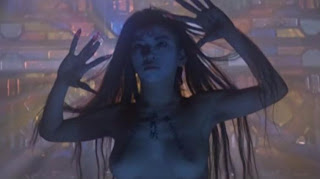 Despite a rough start, things do get enjoyably strange and frenetic during the second half when Madam's vengeful ghost shows up. She scolds men trying to burn her furniture, kills a bird and shows up as a skull-faced apparition spewing blood. During the finale, a completely nude woman with super-long red fingernails does some crazy exorcism dance that goes on for longer than five minutes while some old female mystic beats her with a shoe and spits "black dog's blood" on her! There's also nude body painting, a decapitated talking head, a reanimated crawling hand, a real snake getting chopped up with a cleaver, a guy being beat to death with a stick and ears being ripped off. Toward the end, you might notice a few ideas were pinched from KWAIDAN (1964) and, while nothing great, this Shaw Brothers production is fairly entertaining, lively and colorful, and the whole thing looks pretty good. 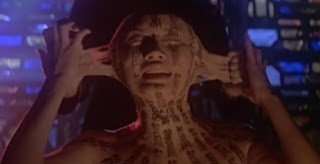 The DVD is from Intercontinental Video. A pretty straight genre feature, it was followed by two unrelated comic horror sequels: HEX VS. WITCHCRAFT (1980) and HEX AFTER HEX (1982).
.
★★1/2

Posted by The Bloody Pit of Horror at 1:15 PM No comments: