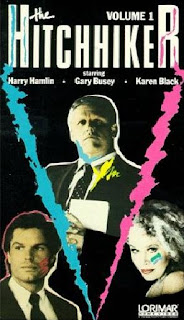 Directed by: Mike Hodges Phillip Noyce Mai Zetterling HBO's The Hitchhiker, which featured decent production values, good actors, great theme music and adult content (violence, gore, language and sometimes sex and nudity), never really got the credit it deserved for helping to pave the way for Tales from the Crypt and other R-rated pay cable genre programs. The series began in 1983 as a three episode stint starring Nicholas Campbell as the title character, who introduced horror or suspense themed tales, most of which with a moral message at their center. When the three episodes proved successful the series was picked up, Page Fletcher replaced Campbell as the host and it all managed to last until 1991 (with the USA Network eventually taking over from HBO in 1989). Naturally, all of the episodes are now available on DVD, but back in the age of VHS, four different tapes, each featuring three episodes apiece were released and that's what I'll be covering here. All of the episodes in the videos are from Seasons 2 and 3. The episodes in the very first video are "The Curse," "W.G.O.D." and "Hired Help."
"The Curse" (S3-E9) was directed by Australian filmmaker Phillip Noyce (who'd make the very good thriller DEAD CALM a few years later) and is the best of three episodes here. Wealthy, pretentious yuppie Jerry Macklin (Harry Hamlin) has made a fortune with investment property. Sadly, it's in the form of tenement buildings and he hasn't been keeping them up to standard. In one of these slum apartments, a man is seriously injured when he falls over a balcony. Jerry promises elderly voodoo queen Serita (Beah Richards) he'll fix it but backs out since he wants to use the money to build a dream beach house. At a party, Jerry meets the sexy Tania (Deborah Lacey) and after a one-night stand wakes covered in blood and with a snake tattoo that begins on his leg... and slowly begins to work its way up to his neck. This is an interesting voodoo attack on the 80's "Greed is Good" credo, and features some surprising gore at the finale. 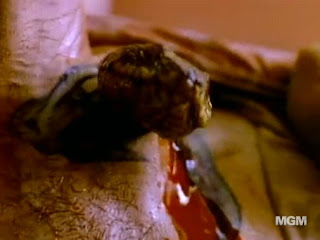 In Mike Hodges' "W.G.O.D." (S3-E4), well-do-to-but-troubled radio evangelist Reverend Nolan Powers (Gary Busey) is prepping for a "Weekend Watchdog" news story when things start falling apart. While on the air, he gets a bizarre phone call from someone who tells him "It's cold here!" and calls him a "pious phony." The same caller seems to be terrorizing him away from the station, including making his hands bleed at a "Right to Life" anti-abortion rally. Back at home, Nolan's mother Lynette (Geraldine Page, who'd win the Best Actress Oscar for THE TRIP TO BOUNTIFUL the following year) spends her days lying in bed with a teddy bear listening to records of Nolan's "perfect" brother. Said brother was a popular child singer who apparently ran away from home and never came back. Though well acted and with a few amusing scenes, this one's predictable. Robert Ito (playing a reporter) and Brioni Farrell co-star. 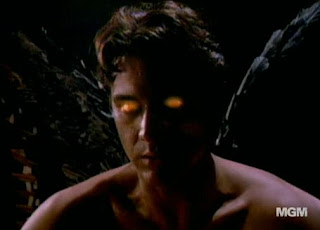 Mai Zetterling's "Hired Help" (S2-E9), aka Karen Black does a wetback winged demon, wraps things up fairly nicely. Cold, bitchy garment factory owner Kay Mason has been hiring Mexican illegals for her sweat shop operation and treats them horribly, even threatening to fire a guy for accompanying an injured worker to the hospital. Her neglectful husband Herb (Donnelly Rhodes) brushes off her advances, so it's no surprise that while hubby is away she selects hunky Victor (Fernando Allende) to do some yard work. Her maid Maria (Ali Giron) informs her that he has the mark of a demon, but Kay ignores her warnings and goes about seducing the mysterious and quiet hired help. Pretty interesting seeing something from the mid-80s comment on illegal immigration (considering how often it's in the news these days), but Black's overall weirdness is what provides the most entertainment value here. Whether screaming, talking in a baby voice, lying around in lingerie making sexy faces or flailing around in bed drunk spouting lines like "Make yourself comfortable. Like take off all your clothes. It's hot!," this is Black's show all the way. 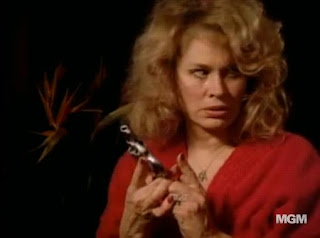 Overall, the three tales are uneven, but about as good as what you'll find in the majority of other horror anthologies. I'll be reviewing Volumes 2 (featuring Roger Vadim's "Dead Man's Curve," Phillip Noyce's "Nightshift" and Paul Verhoven's "Last Scene"), 3 (featuring Carl Schenkel's "Ghost Writer" and "True Believer" and Mai Zetterling's "And If We Dream") and 4 (featuring Richard Rothstein's "Videodate," David Wickes' "Face to Face," Phillip Noyce's "Man's Best Friend") here in due time.

Posted by The Bloody Pit of Horror at 5:46 PM No comments: