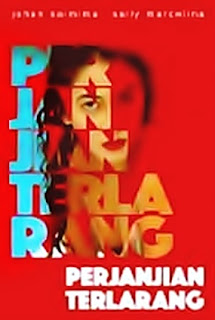 
A torch-carrying mob of villagers march to a witch doctor's home, where he's in the middle of doing some kind of ceremony with a topless woman. He leaps out through the roof and tries to escape, but he's caught, beat to a bloody pulp and then thrown into a lake. Next up, we're treated to a montage featuring two teen couples on motorcycles driving around on the beach and being mushy in a canoe. And then we meet three other guys with pantyhose over their heads, who break into a mansion. After doing her nightly prayer, a servant woman is slapped and then karate chopped unconscious. After admiring her jewelry, the wife is pushed down and hits her head on the corner of a table. After counting his money, the man of the house is beat over the head with a chair.


Just as the thieves are walking out with a briefcase filled with money, a TV, stereo and jewelry, daughter Murti (Sally Marcellina) and her martial artist boyfriend Yusman (Johan Saimimi) arrive home. Though Yusman is able to fight them until they run off, the family's problems go much deeper than a few robbers roughing them up. The once-rich father - Murdali (Wenda Wijaya) - has been having major financial problems. After paying off only a portion of his debt the family's money is now completely gone.

Murdali makes the mistake of accepting help from Juragan Hamid (Mawardi Harland), a wealthy criminal who's willing to barter for goods. Unfortunately, the "goods" he wants are Murti's. Backed into a corner, the father goes along with it, and the passive mother (Tien Kadaryono) asks her to sacrifice for the family, but Murti refuses as she's in love with Yusman. The two lovebirds go on another romantic canoe ride on a lake, slash their wrists and make a blood pact to symbolically marry even if everything else is out of her control. Some of the blood drips into the water and awakens the same evil sorcerer - Mbah Jagaraga (El Koesno) - from the opening scene.

While Murti's changing clothes, the sorcerer's ghost enters her bedroom and then takes over her body. And what's the first thing a presumably heterosexual male would do inside an attractive woman's body? If you answered touch it, you would be correct. But then he jumps into her bed, starts making out with a body pillow and puts on a sheer nightie to go seduce the boyfriend, so I don't know. As Yusman gets ready to climb into bed with her for a literal red light special as a photo of a teased-hair Jon Bon Jovi is right behind him, the spell is broken because the female servant starts reading from the Koran a few doors down.


Juragan sends his thugs (the pantyhose robbers) to collect Murti. She's chloroformed, kidnapped and locked in a bedroom. Juragan then goes to the father with a contract that will alleviate his debt in exchange for Murti's hand in marriage. And he signs it... right in front of Yusman! "Dad of the Year," he ain't. When Juragan returns home and tries to rape his new "wife," he accidentally kills her instead and then has his thugs sink her corpse in the lake. Since the body-jumping spirit was already in her a few times already, he reenters and sends her on a killing spree that includes punching through a stomach, smashing a guy against a tree with a jeep and impaling a guy on a fence. An exorcist (Arman Effendy) is finally called in to put her soul to rest.

If you're looking for seemingly endless set-up with minimal payoff, then here's your movie! The first hour is mostly dull and talky soap opera punctuated with a few fight scenes. All of the clumsy and ineptly edited horror scenes then get crammed in at the end. I wish I could say they're worth waiting for. Same goes for the anticlimactic exorcism scene, which features fireballs, wire work and a scarf used as a weapon, but is over before it even has a chance to get good. They don't even bother with any make-up on the possessed Murti and instead make her hair smoke and drench her with red light. On the plus side, there's a decent widescreen print of this available instead of the usual awful VCD with a blurry picture and jacked up aspect ratio.


The sets (especially the hospital rooms where many of the scenes take place) are hilariously cheap. Pictures of Billy Idol, George Michael and Debbie Gibson have been ripped out of magazines and then taped to the lead female's walls while her big macho hero boyfriend has a poster of Boy George (!) hanging by his bed.

In addition to being a prolific TV actress, Marcellina (sometimes spelled with one "l") was also the heir to Suzzanna's "Queen of Indonesian Horror" throne. By my count she appeared in around 20 horror / mistik films over an 8 year span (late 80s to mid 90s) and most feature her as some kind a possessed seductress. Unlike Suzzanna, who frowned upon nudity and overt sexuality in her films, Marcellina accepted that part of the job as she knew it would help the film's distribution. She even produced and wrote many of her own starring vehicles, and even some movies she didn't even appear in, which wasn't at all common back then. 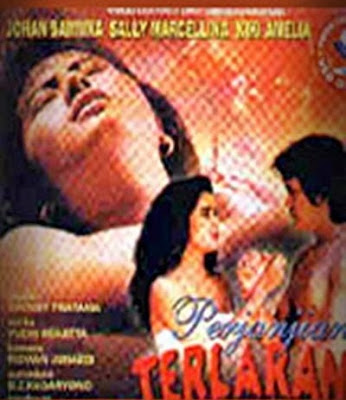