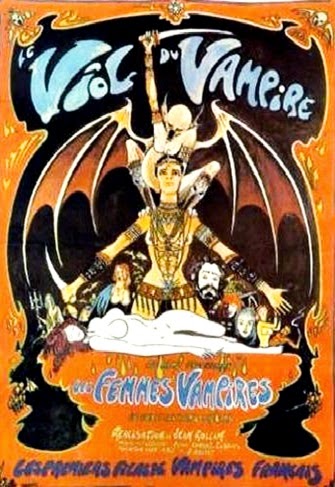 
Popular French art / cult / erotica director Jean Rollin's first foray into the horror genre calls itself a two-part melodrama and is divided into two segments that overlap; "Part One: The Rape of the Vampire" and "Part Two: The Vampire Women." In the first portion (which is the shorter of the two), psychoanalyst Thomas (Bernard Letrou), his friend Marc and Marc's girlfriend Brigitte (Solange Pradel) go to a mansion to investigate claims of vampirism. Living at the large country home are four psychologically troubled young women who are rumored to be ageless vampires by the superstitious townspeople. The villagers try to keep the women inside at all times by staking crosses everywhere and using a weird-looking, hairy-faced scarecrow that an old man provides the voice for. Thomas suspects the women have been brainwashed into believing they're actually vampires when it fact they're not, and sets out to get to the bottom of things. Even though the acting's not great, the dialogue is terrible and the editing is horrible, this segment is visually very beautiful. The images, the camera set-ups, the framing of shots and the clarity of the black-and-white photography are all done well. The director also proves to have a nice eye for detail, outdoor scenery, light and shadow. The art direction is also good, and though the story line is a bit muddled it's still not too difficult to follow. Unfortunately, immediately after this shorter portion concludes, the film basically falls apart and it never recovers.

With several of the principals either dead or turned into vampires at the end of "Rape," we now enter the second segment "The Queen of the Vampires." The "Queen" (Jacqueline Sieger) is an arrogant short-haired woman who is carried around on a bed by two of her goons and has a bunch of hipster followers at her side to do her bidding. No clue what she really wants or what's driving her, but it seems like she's power mad and wants to put on some kind of theatrical wedding where two people will have sex in a coffin that's nailed shut. She and her minions have also blackmailed a doctor into trying to come up with a cure for vampirism. They have turned the doctor's girlfriend into a vampire to edge him along. Several characters from the first segment wander in and out every once in awhile. It's all extremely confusing to watch and hard to keep track of what's going on, who is who and what it is whoever is trying to accomplish. This second and much longer portion also seems more rushed and less stylish than the first. It's also full of continuity errors and hacky editing splices that make it even more confusing. Both segments feature plenty of T&A shots, which were quite risqué for 1967 I'm sure.

Discounting Rollin's super-cheesy living dead disaster Zombie Lake (which even his most devoted fans have a hard time defending), this is my first real look at the work of this director. I see a fantastic visual stylist with a lot of potential who needs a little help on his narrative structure and pacing. Not surprisingly, this film started life as a short but was later expanded to feature length for theatrical showings by the director, which may explain how nonsensical and meandering it eventually becomes. Regardless, a happy medium could have been met but it wasn't. Throwing a little clarity in every once in awhile never hurt any film if you ask me.

Of course, some people can and will defend the most senseless films ever made as long as they look good, calling them "poetic" or "dream-like" or "experimental." That's perfectly fine if this is a masterpiece in some people's eyes, but to me a movie this illogical really needs to sustain that other-worldly feel throughout to keep me interested. The first segment (the original short film) almost seemed to hit the right note, but the second (the expansion to feature length) didn't even come close. I'll certainly still check out more films from Rollin based on the positives here even though I was less than enthusiastic about this one.