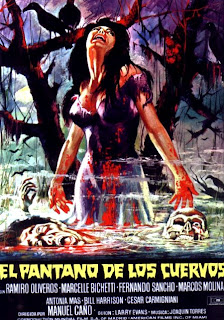 ...aka: Swamp of the Ravens


Death, dismemberment, zombies, necrophilia, mad science and a facially deformed pan flute playing homeless leper. Yep, it's another obscure gem brought to us by the fine folks at Something Weird video. A Spanish-American co-production filmed in Ecuador and directed by the same guy who brought us the more famous (barely!) schlocker VOODOO BLACK EXORCIST, this is essentially another standard issue obsessive mad doctor flick spiced up with sex, gore, and even several memorable musical moments you have to see to believe. Brilliant geneticist Dr. Frosta ("Raymond Oliver" / Ramiro Oliveros) is denied access to corpses for his experiments by the medical ethics committee, so he does the next best thing - steals them... off the streets... before they're actually dead. You see, he's trying to "correct" that mysterious medical condition known as death and the fresher the bodies, the better. Frosta retreats to a secluded swamp front shack (decorated with bird skeletons, caged monkeys, mice and vultures and pickled babies in jars!) where no one will bother him and begins abducting people for his experiments. There's really not much in the way of detail given as to how he can bring the deal back to life, but it has something to do with magnetic brainwaves, nucleic acids and blood transfusions. He also has a mostly docile zombie-like Igor type fella who has nothing to do other than wade through swamp waters every once in awhile to dispose of the failed experiments.

Aside from having trouble procuring cadavers, dealing with a facially-scarred leper's blackmail attempts and trying to keep his university co-workers from getting suspicious, he's also got lady problems. Girlfriend Simone ("Marcia" / Marcelle Bichette, from H.G. Lewis' The Gruesome Twosome) has decided to leave him and reconcile with former beau Richard ("Mark Mollin" / Marcos Molina), a Tom Jones-style lounge singer (yessss!) who treats us to no less that three wonderfully cheesy musical performances. The best one is when he sings a song with lyrics that go "Wherever you may find yourself, I wish you were dead. My own robot. My own. My lady..." to a mannequin that looks suspiciously like Simone. Instead of being terrified by that act of creepy obsession like most of us would rightfully be, Simone soon finds herself trying to flee the country with this guy. Frosta follows them to the airport and manages to kidnap Simone without anyone noticing. He takes her back to his shack, ties her to up to a table, fondles her, kills a Puerto Rican prostitute, drains her blood and then begins using Simone as his blood transplant guinea pig. She eventually dies, but that doesn't kill Frosta's love for her and he indulges in a little post mortem hanky panky ("Never have you been so mine!") The film sidesteps a few times to deal with the town sheriff's (played by Fernando Sancho) investigation of missing persons and random body parts found around town for some boring filler.

And how about them ravens in the swamp? Well actually, there are no ravens in the swamp, just lots of buzzards perched on tree limbs and circling above. Some of the most atmospheric scenes in this film (which are quite good actually) involve the bodies that have been dumped into the water coming back to life. Instead of climbing out of the water and feasting on flesh, the zombies just poke their heads out of the water and sit and stare and wait. For what, I couldn't tell you. But white heads peaking out of the dark water and surrounded by green plants are pretty arresting and creepy images. There's even a scene where a man is strangled to death by a disembodied hand. I guess Frosta's experiments worked after all. The director even found time to take a trip to the local morgue where some morticians are performing an autopsy that from all indications is being done on a real dead body. The makeup fx in this film are pretty good, but they're not that good.

Strange, very strange. There's wonderfully catchy synth theme music, dubbing and dialogue are for the birds and the names have been anglicized to protect the innocent. Not one of Something Weird's best quality prints; it's dark and there's some color damage and grain, but thank God they're around to unearth and distribute movies like this, huh? It's paired with the silly Filipino shocker THE THIRSTY DEAD (1973), but the DVD is still worth every penny just for this film, as well as some of the extras, such as some great trailers and a full episode of the Swedish TV series "13 Demon Street" hosted by Lon Chaney, Jr. 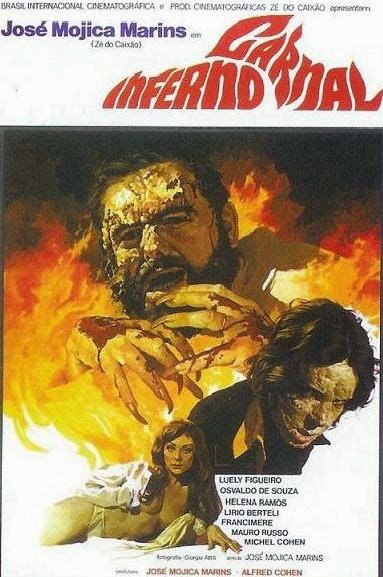 
First off, the quality of the VHS that was distributed by Something Weird Video is downright abominable. Not only does the entire film have an orange / yellow-ish tint and a bright pink bar across the top the majority of the time, but it's washed out, blurry and heavily damaged, with an annoying continual roll. I'd say it's just barely viewable, but most people would probably just switch it off because of the abhorrent quality. So I'd think twice about purchasing this from them unless you are a die hard fan of José Mojica Marins and this is the only thing that's available to you. Actually, I think it may be the only way to see this one as per this writing, at least for American audiences. I'm not sure about its availability elsewhere. The run-time of their release is also just 68 minutes (as opposed to the 85 minutes listed on IMDb), which may explain the hackneyed editing. Regardless, you have to give Something Weird props for unearthing what they do. If not for them, literally hundreds of strange / obscure films from around the globe would probably never be seen.

Marins (who also directed, produced and wrote the original story) stars as Dr. George Medeiros, a scientist so dedicated to his "experiences" (as the subtitles call them, I'm sure they meant to say "experiments") that he neglects his much younger wife Rachel (Luely Figueiró). Not too difficult to see why, as Rachel is a pretty nasty piece of work who seems to only care about money and doesn't think twice about carrying on an affair with George's gigolo bum best friend Oliver (Oswaldo De Souza). As if the affair isn't enough, the backstabbing bride and her lover then plot to kill George by throwing acid in his face and setting his lab on fire. Too bad for them, George somehow manages to survive the ordeal and spends eight months in the hospital before being released. During that time, Oliver has blown nearly all of Rachel's money trying to live a playboy lifestyle - gambling, partying at the Louvre club and picking up prostitutes. Then one day out of the blue, one of Oliver's lovers decides to stab and kill him, leaving Rachel alone, broke and desperate.

Rachel is then understandably surprised when the husband she tried to murder begins to pay for all her needs and shows compassion from afar. Being hideously deformed from the attack, he doesn't let her see him or his face, and allows his friend and confidant Alfredo (Lirio Bertelli) do the leg work for him. Is George truly doing it out of the kindness of his heart, or is it all a trap? The film cuts away several from the main storyline to show a beautiful, smiling woman named Virginia (Helena Ramos) lying in bed topless or showering, leading one to wonder if these are flashbacks, flash-forwards, taking place in the present day or just hallucinations of a deranged mind.

Though the dialogue and plot are both pretty heavy-handed when it comes to moralizing, it does manage to tie up the loose ends before the end, and is capped off with a decent twist ending. It also has some pretty arresting directorial touches here and there, with atmospheric use of shadow, some quick-cut editing tricks and a pretty great soundtrack featuring screams, echoes and various creepy and disorienting sounds, which could have very easily been the same ones used in earlier Marins movies. The design on Marins' acid-deformed face is also not bad and he even gets to wear a cool black trenchcoat with an upturned collar to go along with the ghoulish face and three-inch long fingernails. As far as the exploitation elements go, there's a bit of gore (including a close-up eyeball surgery that looks to be the real deal), as well as mild doses of nudity and sex. So while this isn't nearly as colorful, surreal, interesting or nightmarish as the earlier Marins efforts I've seen and comes off more by-the-numbers, it's not completely useless.