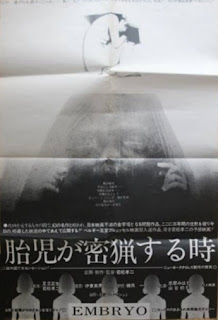 ... aka: 胎児が密猟する時
... aka: Embrio lovi u tajnosti
... aka: Embrione
... aka: Embryo
... aka: Embryo Hunts in Secret, The
... aka: Quand l'embryon part braconner (When the Embryo Leaves to Hunt)
Directed by:
Kôji Wakamatsu
After having distribution and censorship issues with one of his previous films despite it successfully playing at the Berlin International Film Festival, Wakamatsu moved on from Nikkatsu Studios to form his own independent production company (Wakamatsu Production). This was their first release and it's considered one of the precursors to the popular pink film movement (sex-and-violence exploitation films, though typically with an artistic bent) that would make a big impact in Japanese cinemas the following decade.
It's a dark and stormy night as wealthy department store manager Marukido (Hatsuo Yamaya) and Yuka (Miharu Shima), an employee at one of his stores, get hot and heavy in the back seat of his car. She insists they go somewhere else, so he takes her into a building and carries her up the stairs to an apartment. The naïve and inebriated Yuka doesn't seem to notice (or care about) the huge amount of red flags telling her she may be in danger. For starters, the apartment they go into is clearly seldom used and is nearly devoid of all furnishings. When asked about it, he claims it's a spare apartment that he never spends any time in. So why would he take her there instead of his more comfortable primary home? Second, his behavior right from the start is extremely odd. He stares at her intently and lurks in the shadows as if sizing her up; comparing her to something or someone else. And then, while the two are in bed together, he starts getting so rough she has to repeatedly ask him to stop. As for his pillow talk techniques, demanding to know how many men your prospective lover has slept with prior and not taking "I can't remember" as an answer probably isn't going to be getting anybody in the mood. 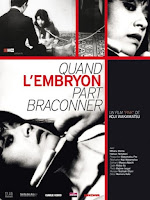 You may be wondering how Yuka ended up in this situation to begin with. She doesn't really know the first thing about Marukido. And he doesn't even know her name until they're inside the apartment. It basically boils down to Marukido being an almost mythical figure at her place of employment. He's handsome, well-dressed, rich, mysterious and single, and a frequent topic of conversation between his curious female employees. Yuka was drunk and the opportunity arose so, well, why not? However, unbeknownst to her, Marukido's has other plans for her. She's the spitting image of another woman from his past, a woman he carries a lot of resentment toward. And now that he has a hate surrogate in a vulnerable position, why not vicariously take it all out on her?

Eventually holding her captive, Marukido subjects Yuka to one torture and indignity after another. After slipping her a sleeping pill, he ties her up and lashes her with the "whip of love from God almighty" that he claims will "bring together your flesh and soul." After whipping her bloody, he screams "Women like you make me sick!", calls her "filthy" and "a cheap whore," compares her to a "stinking dog" and belittles her for merely being a lowly clerk.
He withholds food and water as punishment, threatens to shave her head and rip out her fingernails, slices her with a razor, repeatedly dunks her head underwater in a bathtub, terrorizes her with a lit candle and forces her to walk around on all fours and drink from a bowl like a dog. All the while, he insists he doesn't plan on killing her. He merely wants to "train" her so she can break her of her pride and help her regain her "shining purity" so that he can marry her. However, Yuka is more resilient than he anticipated.

Frequent flashbacks to Marukido's previous marriage are used to explain his psychological issues. Viewing the world as being full of hellish suffering, he never wanted to bring a child into it and got a vasectomy, but his wife mysteriously ended up pregnant anyway. Initially believing she'd had an affair, he whipped and tortured her to try to find out the identity of the father, only to learn she went to a doctor behind his back and got artificially inseminated. At least that's what she claimed. Ignoring his pleas for her to get an abortion, she then attempted to leave him to raise the baby on her own. Though it's never shown what happened to the wife, we're led to assume Marukido murdered her at some point. He now keeps a "mortuary mask" / mold of her face, supposedly taken from her corpse, in a chest in the closet along with his whip, rope and other toys.
We're also given another major character insights, namely that Marukido's mother committed suicide after a nervous breakdown and hung herself in the stairwell of the families store. Though it is again left somewhat vague, it's mentioned that she perhaps killed herself due to guilt over an incestuous relationship she was having with her son. All of this has led Marukido to become impotent.

73 minutes of nonstop torture, screaming, whimpering and agony are clearly not going to appeal to all viewers out there (it's not really my cup of tea either), but this has to be recognized for being well-made on a low budget regardless. One can certainly try to pluck a deeper meaning out of the proceedings (the mother fixation / safety of the womb connotations alone should keep you busy), but the target audience is clearly those into bondage and sadomasochism. The female lead is naked and tied up in a variety of rope configs for nearly the entire duration, and the primary emphasis is on "breaking" her into complete subservience. I've seen some viewers describe this as misogynistic and others describe it as feminist (tables are eventually turned), but I personally didn't see it as being either.
Even if you're not into BDSM, if you can approach this as an exercise in style, it does have visual rewards. There's effectively bleak / claustrophobic atmosphere (nearly the entire film takes place inside a dimly-lit apartment), stylish lighting and black-and-white photography and the occasional interesting directorial or editing touch (white light flooding the screen to signal the flashbacks, a few double exposure hallucinations...) to help cut through the repetitive nature of the plot. The lead actors aren't bad either.

This was given a theatrical release in Japan and some European countries like Belgium and France and was also occasionally screened at film festivals. I'm not aware of any U.S. release. Screen Anarchy put it out on a 4 disc set called Kôji Wakamatsu: Volume 1, which also included the same director's films Secrets Behind the Wall (1965), the Richard Speck-inspired VIOLATED ANGELS (1967) and Go, Go Second Time Virgin (1969). The set only includes French subtitles but English supplemental titles are available for download.
★★1/2
Posted by The Bloody Pit of Horror at 3:28 PM No comments: