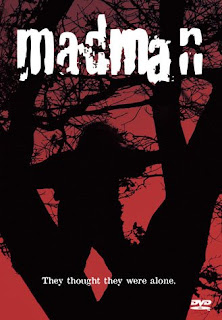 A typical FRIDAY THE 13TH-style camp slasher done with little talent, no imagination and even less sense. At a summer camp for "gifted" children (well, make that a fall camp that for some reason is in session in November [?] and populated with children we don't see very much of), there's this local legend about an undead nut lurking in the woods. You don't say! Apparently he took an axe to his wife and kiddies back in the day and was hung by some angry towns folk. No way! And if you scream his name (whispers don't count) directly into the woods, you'll somehow awaken him from his slumber and he will proceed to hack up anyone he can get his bloody mitts on. Hooray! And so the story goes, the lot of not-so-young folks taking employee as counselors start biting the big one as a somewhat tubby, and certainly quite grubby, madman does the slasher killer thang. The only thing distinctive about this forgettable effort is the selection of victims on hand. Not only do they appear to be slightly inbred, they're also the most moronic slasher movie fodder on record. The irritating dweeb responsible for awakening the psycho in the first place somehow manages to make it through virtually scratch free. Life is so freakin' unfair, huh? He also manages to find the killer's home out in the boonies early on, but somehow is unable to find his way back to the camp to warn the others when he spots old MM brandishing a sharp weapon and headed in that general direction. A hem. You don't see many working telephones at camp ground murder sites as it is, but when you do and know there's some psychopath hacking up all your buddies... call the freakin' police! Don't call someone at the camp to tell them you are going here and there before hanging up. And please, if the killer is two steps behind you, for the love of God find a decent hiding place. That does not include emptying the entire contents of a refrigerator onto the floor in clear view of whoever enters the room, climbing inside and shutting the door. And this is only the tip of the iceberg when it comes to idiotic character behavior. I could do ten additional paragraphs on this subject.

The acting is terrible, whoever edited it seems to not have any concept of scene continuity and the whole thing is derivative, unoriginal, predictable and quite boring. The carnage comes to a halt during a drippy hot tub interlude complete with a supremely cheesy 'love' theme that manages to get some guy and female lead "Alexis Dubin" (i.e. Gaylen Ross, from DAWN OF THE DEAD) out of their clothes. There are a few redeeming qualities... 1. The picture quality on the Anchor Bay DVD is actually quite nice. 2. Some of the photography is fairly good; especially a stylish sequence involving a hanging. 3.) There's enough gore here to please people who put bloodshed ahead of logic, plot and technical competence. Otherwise, this one bottoms out and is only recommended to very forgiving fans of 80s slasher movies.
★1/2
Posted by The Bloody Pit of Horror at 12:31 AM

Besides what you have already mentioned, this movie has 2 additional points I couldn't get past.
1. This may be juvenile, but naming the person everyone goes looking for "TP" (he even has it on his belt buckle)just made me laugh. All I could think about was toilet paper everytime someone spoke his name.
2. Why the heck is there a hot tub at a children's camp?

I think I'm immune to hot tubs in weird places in exploitation film due to Chained Heat where the prison warden has a hot tub in his office!

gaylen ross. but it's a slasher, which kept me from watching it all these years. bizarre to see someone primarily known for a single role (a movie i've seen 30 times) now suddenly doing different things on my screen. if that sounds weird, well, it feels weird.

Based on what I've heard, Ross refuses to discuss this film and refuses to sign memorabilia associated with it at conventions. Not sure what went down behind the scenes but she clearly is either embarrassed about the movie or there's bad blood between her and the filmmakers.