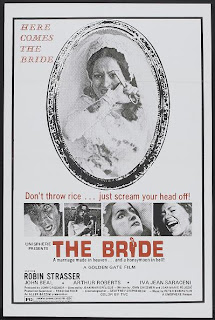 ...aka: Bride, The
...aka: No Way Out
...aka: Scream
Directed by:
Jean-Marie Pélissié
Barbara (Robin Strasser) has been spoiled rotten by her rich Daddy (John Beal). He's even recently given her enough money to design and build her own shingle-covered, Frank Lloyd Wright-inspired dream home out in the country. Barbara's in love with handsome but arrogant David (Arthur Roberts) and even though David works for her father and does good work for her father's firm, Barb's pop doesn't approve of them being together. He seems to have his reasons, but finally caves in and lets his daughter marry him against his better judgment because what bratty Barbara wants bratty Barbara gets. Turns out, Daddy was right. Immediately after Barbara and David tie the knot, and I mean immediately after (during the wedding reception!), David sneaks upstairs to mess around with his former girlfriend Helen (Iva Jean Saraceni). Barbara walks in on them, freaks out, grabs a pair of scissors, stabs David in the arm, marches outside covered in blood, laughs insanely before her wedding guests and them drives off in her car.
Several weeks pass and Barbara is nowhere to be found. David is surprised that her father hasn't fired him yet and wants to meet him for a drink. There, his father-in-law alludes to the fact that he may have pissed off the wrong woman. Apparently, as a child Barbara used to lock herself in her bedroom for long periods of time, had a cruel streak and at one point slowly cut a chicken's head off! David returns home, where he's shacking up with his lover, and then strange things begin to happen, starting with bizarre phone calls from a woman claiming to be David's answering service. While David is at work one day, Helen is tormented by an unseen figure who leaves behind a chicken head on her pillow and frightens her with a skeleton dummy prop. She immediately packs her bags and takes off, leading David all alone to venture into the kooky house that Barbara built.
This one has slipped between the cracks over the years; undeservedly so for the most part. It's a pretty neat and mostly satisfying little thriller that benefits from decent performances, a spooky music score, a standout nightmare scene full of weird camera angles and distorted sounds, several well-directed horror sequences and a clever finale that's as hilarious as it is eerie. The major problem with this one is that the current available prints (both Brentwood's release THE BRIDE and the UK release NO WAY OUT) are in ghastly condition and cut by around 12 minutes. Still, even in butchered form, this is worth a look.
Producer and co-writer John Grissmer would go on to make SCALPEL (1976) and the slasher BLOOD RAGE (1982). Lead actress Strasser is a popular and well-known soap opera star, who has played Dorian Lord on One Life to Live ever since 1979. Beal (who passed away in 1997) had the lead role in 1957's THE VAMPIRE and also played a supporting role in AMITYVILLE 3 (1983). Roberts - making his film debut here - would go on to become a 'B'/exploitation film regular, beginning with his turn as the alien-vampire in Jim Wynorski's remake of NOT OF THIS EARTH (1988).
★★1/2
Posted by The Bloody Pit of Horror at 5:36 PM No comments: