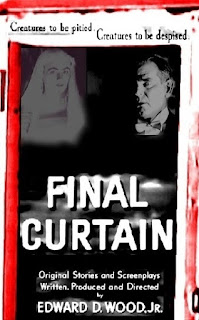 ... aka: Portraits of Terror: Final Curtain


Ed Wood fans are beyond help! Insulted? Don't be. I like you guys. Obsessive people, particularly those obsessed with film-related things, are my kinda people. I just don't have the attention span to focus everything on just one person. Die hard Wood fans just have to see / read everything this man ever touched and are on a constant search to unearth more and more. They rejoice at every new Wood-related film, failed TV pilot, transvestite porno paperback, behind-the-scenes photo, trivia tidbit or whatever else surfaces and do cartwheels over something as minor as finding a short reel of silent outtakes from an EW production. Because of his cult popularity, even the most useless, throwaway junk this man did is cause for celebration. If he aimed a camera at a white wall and filmed it for five seconds, then his fans really want to see that and find some kind of deeper meaning behind it. Understandably never given any kind of recognition in Hollywood, Wood's life story (WWII Army vet! Cross-dresser-with-Angora-fetish! Friend of the equally-tragic Bela Lugosi! Failed filmmaker!) is equal parts funny, sad, fascinating and inspiring. Despite trying and failing for years to get noticed and eventually succumbing to depression, sleaze and alcoholism in the process, Wood never really gave up on his quest for fame and died a penniless drunk in 1978 as a result. The Cult of Ed Wood wouldn't begin developing, however, until two years after his death and took decades to reach its peak.


Harry and Michael Medved's book The Golden Turkey Awards, which named Wood's magnum opus Plan Nine from Outer Space (1957) the “Worst Film of All Time” and Wood himself as the “Worst Director of All Time,” got the ball rolling in 1980. Once the video revolution began, many of Wood's forgotten and barely-released films became more widely available to audiences, with clips from his films showing up on specialty tapes like Sleazemania and Horrible Horror. Genre magazines and even some mainstream publications began re-discovering his work, too. In 1992, Rudolph Grey's Wood bio Nightmare in Ecstasy was released and generated even more interest in the colorful director. The biggest Wood booster of all came two years later with Tim Burton's biopic / last great movie Ed Wood (1994), which was based in part on Grey's book and painted the director in a plucky, likable, misunderstood and entirely sympathetic light. The film, which won an Oscar for co-star Martin Landau (playing Lugosi), remains the biggest endorsement for the Cult of Wood to date. Most people who see it immediately seek out one of the director's other films to see if they're really that bad. A few even get hooked on the weirdness. 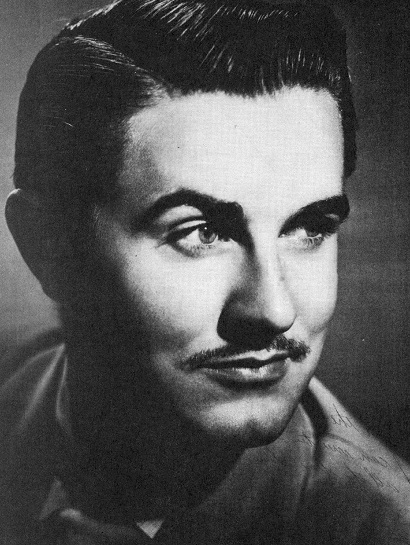 I sincerely don't believe that Wood is the worst director of all time. Bad? Sure. Inept? Most of the time, yeah. One of the worst? Probably. THE worst director ever? No. His movies usually have cheap character to them, plus trademark elements that really individualize them and make them instantly identifiable. Much like the work of the oft-maligned Andy Milligan, most of his work at least feels genuine, sincere and somewhat personal. Both men really couldn't help but to weave their own preoccupations and obsessions into whatever it was they made and that's more interesting than the technically more competent but consistently generic, anonymous and utterly forgettable work of dozens of other directors I could name. 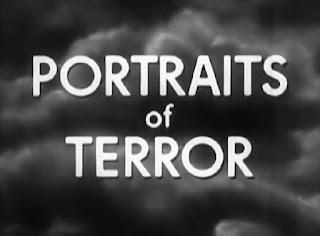 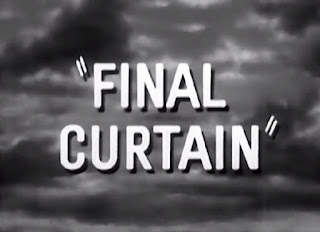 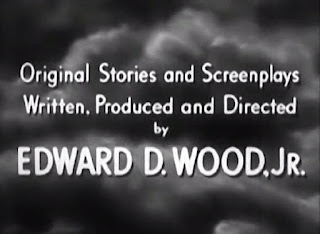 Final Curtain is one Ed Wood's short subjects that popped up long after everyone had already seen all of the director's other major work and were still clamoring for more. TV work was nothing new for the director as he'd already made commercials starting in the late 40, as well as “story-ad” films, 5 minute segments of the ridiculous Criswell Predicts (1953-61) and the failed western pilot Crossroad Avenger: The Adventures of the Tucson Kid (1953). Curtain was made to be the premiere episode of a horror / suspense anthology series titled Portraits in Terror that was never picked up. It was discovered by actor Paul Marco's great nephew, who purchased it from a collector, had the print restored and then had it screened at various film festivals, including Slamdance in 2012. Now it's on Youtube for free viewing, along with several other Wood shorts (like 1951's depressing The Sun Was Setting). Supposedly, a second episode called The Night the Banshee Cried was also filmed, but that one has yet to surface. 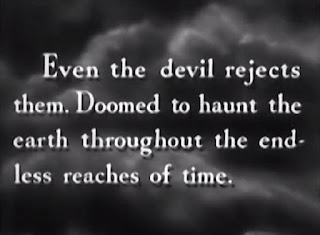 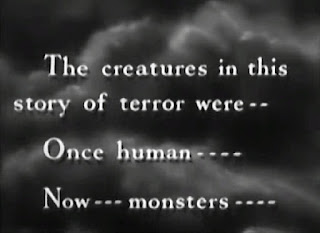 After giving his final performance as a vampire in a stage play, the lead actor (Duke Moore, as James “Duke” Moore) decides to stick around in the theater once everyone else has gone home. Why? Well, because some “unseen object” has been beckoning him. Since this was filmed without sound, the whole thing is narrated by a manic Dudley Manlove; who's best-know for uttering the infamous “Your stupid minds! Stupid! Stupid!” line as Plan 9's pompous alien Eros. Here he has to deliver plenty of typically leaden / awful / awkward Wood-ian dialogue like “I know that I must find that object, even thought I don't know what it is I must seek. I also know I fear that I will find that object. This night the calling is stronger than it had ever been before. This night was to be the night I had looked forward to with fear, knowing all the time that it had to come sooner or later and there was nothing that I could do to heed that call. This was to be the night. This, the last night of our play. This night when all of the others had gone home.” 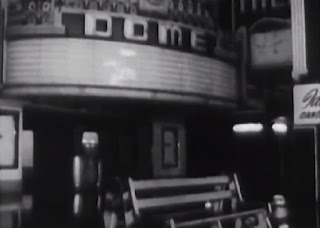 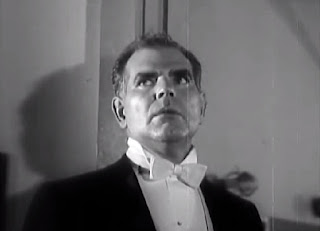 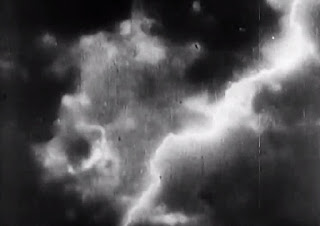 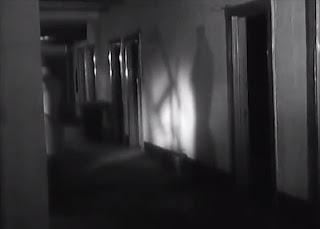 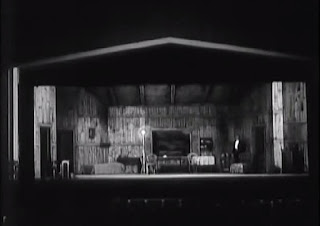 We're then subjected to numerous scenes where the actor wanders around the theater observing such exciting things as wind blowing in through the window, a cat screaming, a staircase railing and door knob that feel cold and clammy and a light bulb going out (“It appears to have gone out after many long nights of continuous use, but has the bulb burned out? Couldn't it have been that some unseen thing has probed a hole through the frosted glass to let in the infectious air?”) Random shots of things like ropes, a water cooler, pipes, rafters, lights and seats that look like “squatty little fat men” are shown over and over again and the narrator goes into the most intricate details about each, desperately attempting to make everything seem sinister. 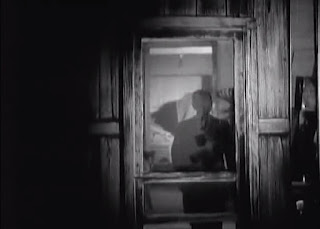 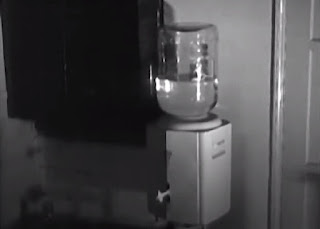 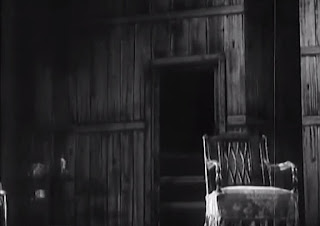 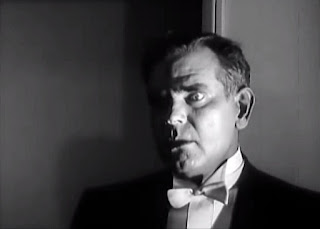 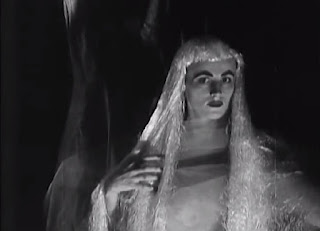 Finally, the actor stumbles into a room where a white-wigged “vampire” mannequin (Jeannie Stevens) stands. After feeling its clothing, the voice-over then goes into a typical Wood rant passionately spooging all over female clothing: “I lift the flowing gown and caress it with my hand then rub the smooth material against my cheek. Inwardly, I know I am smiling; enjoying this new sensation.” The mannequin smiles at him and then he walks into a room and climbs into a coffin. The end. Leave it to old Eddie to make 22 minutes feel like 22 hours. If you're a Wood fan who savors his ludicrously descriptive, overwrought dialogue, strange obsessions and stock footage of lighting bolts, you may find this worth watching. To everyone else, it's just a pitiful, tedious, uneventful, poorly-done bore. Despite enjoying a lot of other Wood-directed / scripted films, I'm in the latter category on this one. 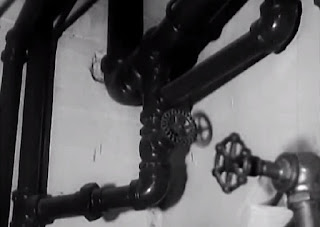 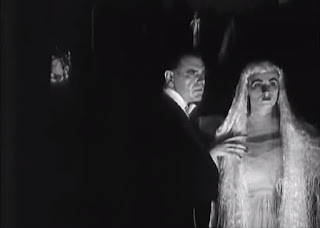 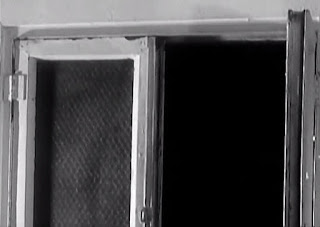 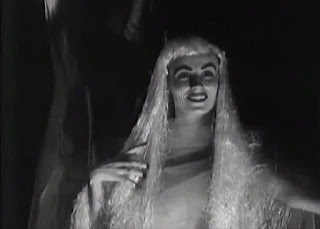 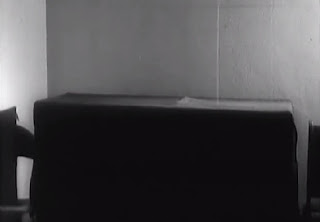 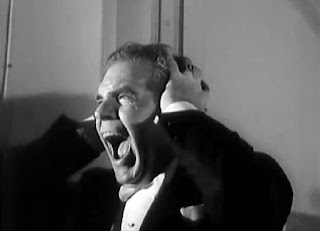 Even though this never became a series (hard to imagine why!), Wood didn't let all of the footage go to waste and incorporated bits and pieces into his Night of the Ghouls / Revenge of the Dead, which was put together in 1959 but not released until 1982 because of unpaid film lab bills. Two of the associate producers were Tom Mason, Wood's wife's chiropractor who doubled for the dead Lugosi in Plan 9, and Anthony Cardoza Jr., who went on to produce three really bad Coleman Francis movies, including the near-legendarily awful The Beast of Yucca Flats (1961).

★
Posted by The Bloody Pit of Horror at 8:38 PM No comments: