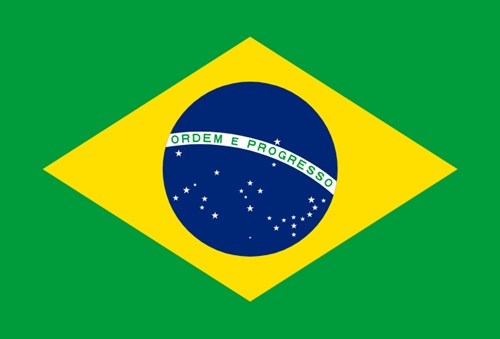 BRAZILIAN HORROR [1950-1990]
With around a hundred or more genre titles made during the timespan we cover here, Brazil is easily the top South American country for horror. And you wouldn't even know that going by most other websites, who jump right from discussing the father of Brazilian horror (who we'll be discussing shortly) to 2000s Brazilian genre films (there's been quite an explosion of them in recent years) as if there's nothing in between. It's easy to understand the oversight, though. From about the mid 70s until 1990, the majority of the genre films listed below typically are thrown in the adult (either soft or hard) film category, where they get lost in the shuffle with countless other sex films.
The country had a cinematic trajectory similar to many other film producing countries, with highs and lows going with the ebbs and flows of social and political changes, plus the proliferation of television. After the silent film era made way to more feature-length product by the 1930s, the 1940s and 50s were earmarked by "safe" films (almost exclusively comedies and musicals) being cranked out by Hollywood-style studios like Atlântida Cinematográfica and Companhia Cinematográfica Vera Cruz. That paved the way for rebellious directors (heavily inspired by the French New Wave and Italian Neorealism movements) to buck the system and start making more intellectual, artistic, shocking and / or socially and politically relevant offerings. This movement - called Cinema Novo - flourished in the 60s and 70s and also brought Brazil's film industry to international attention... at least for the time being.
Riding on the coattails of the Cinema Novo movement, the downtown quarter of São Paulo nicknamed Boca do Lixo was the breeding ground for all manner of exploitation films starting in the 1960s. These miscellaneous films, almost all featuring heavy amounts of soft-core sex and nudity, would later be called Mouth of Garbage Cinema. There were plenty of underground art films (part of a parallel underground movement sometimes called Cinema Marginal) and horror flicks produced during this period, though the main moneymaker was the pornochanchada (soft-core sex comedies). Strangely enough, Brazil was under a military regime, had a dominant state-run film company (Embrafilme) and, technically, had strict censorship rules in place in many regions while all of these movies were being made! However, what was and was not acceptable was often left up to certain regions to decide for themselves and these offering proved to be extremely popular with the public.

Emerging around this time was José Mojica Marins, who would become both Brazil's top horror star (often playing his signature role Zé do Caixão / Coffin Joe) and its top horror filmmaker (he had his hand in roughly 20 percent of the films listed below). After toiling around in cinema starting as far back as 1948 (he made his first 8mm short at age 12), Marins supposedly sold his home and car to finance his black-and-white breakthrough project At Midnight I'll Take Your Soul (1964), which is also usually regarded as Brazil's very first horror film. It proved to be hugely successful (it reputedly played in one theater for four straight months) and led to many other films in the same vein, starting with the follow-up This Night I'll Possess Your Corpse (1967). These very distinctive, low budget films, which often featured extremely noisy, almost animalistic soundtracks filled with shrieks, moans and clangy noises, flashy (many would say inept) editing, bizarre sets, vivid lighting (once the productions began being shot in color), surrealistic touches and high doses of sex and violence, eventually attracted an international audience. Well, once companies like Anchor Bay, Fantoma, Something Weird and Umbrella started distributing them globally and people were actually able to see them.
With his arched unibrow, long fingernails, menacing stare and humorously sanctimonious personality (in interviews, he has claimed to most identify with Jesus Christ!), the usually black-clad, caped and behatted Marins would become a very marketable counter culture commodity. In addition to all of the film work, he hosted at least four Brazilian TV programs, appeared in music videos, was the subject of his own comic book series and numerous documentaries, had his own line of fingernail polish (!) and soap and had his image adorn posters, t-shirts and other merchandise. Not only a genre icon, the once-fringe figure, who had always been the subject of scorn and ridicule from censors and moralists, also eventually earned critical respect for his work. Abraccine (the Brazilian Film Critics Association) polled the countries top film scholars and critics and compiled a list (which was also published in book form in 2016) of "The 100 Best Brazilian Films." Three Marins films, his first two Zé do Caixão efforts as well as Awakening of the Beast (1970), made the final cut, which made him one of the most represented directors on the entire list. Thankfully, Marins was able to enjoy this reappraisal of his work before he passed away in 2020. 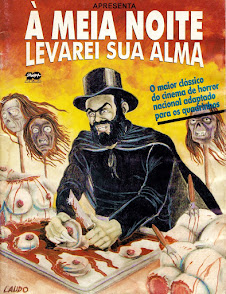 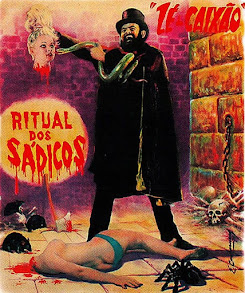 Though Coffin Joe is certainly the most famous Brazilian genre director of this time, there are a number of others who also deserve mention. There's Ivan Cardoso (below, left), who was a big fan of, and heavily influenced by, Marins (even making a documentary about him in 1978), but usually attacked the horror genre with a much lighter hand, frequently mixing it with satire and sex comedy elements. Fauzi Mansur (below, middle), mostly a director of soft and hardcore porn, frequently included horror content in his sex films. He also ended his career making a pair of supernatural gore films; Ritual of Death and Satanic Attraction, which were English-dubbed (a real rarity for Brazilian horror films) and became two of the easiest-to-find Brazilian genre titles here in America for a number of years. Júlio Bressane (below, right), a key director in the underground movement of the 60s and 70s (worth noting that two of his films also made the Abraccine cut) and one known for his extreme efficiency (he could crank out a film in a week or two!), would occasionally make a genre film in the early days. Bressane is now one of the most respected directors in the country. 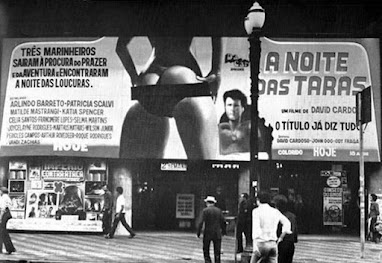 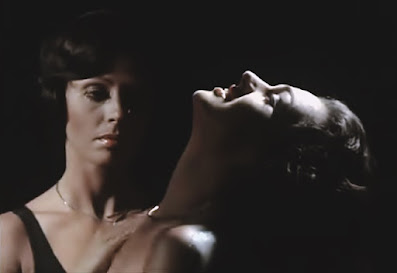 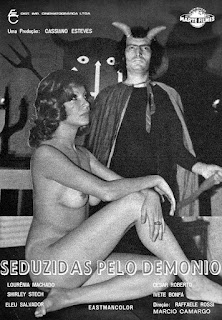 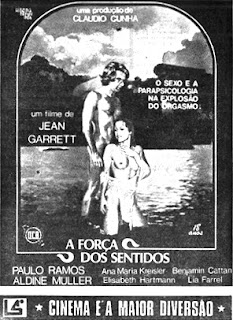 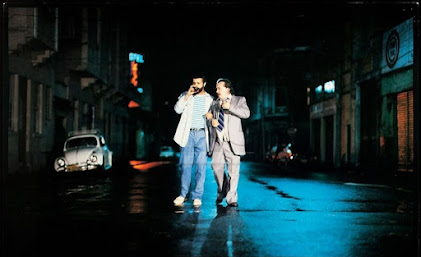 __________________________________________________
TOTAL:
96
NOTES:
- IMDb lists a single Brazilian horror film made before 1960: Galileu Garcia's Cara de Fogo (aka Face of Fire) from 1958. This same film has been categorized as simply an adventure on other websites. Since I've been unable to verify its genre, I'm leaving it off for the time being.
- There are quite a few films that were made in Brazil from outside production companies but aren't technically Brazilian productions, most of which have been excluded. The few that remain on this list I haven't been able to say with accuracy aren't partially Brazilian productions.
- The theatrically-released anthology Trilogia de Terror / "Trilogy of Terror" (1968) consists of three episodes of the TV series Além, Muito Além do Além. Thankfully the movie still exists because it's the only look one can now get at the series. The rest of the episodes (nearly 3 dozen in total) were destroyed (there are rumors that the studio simply just taped over them!).
- Drácula, Uma História de Amor / "Dracula, a Love Story" was a telenovela that lasted only a few days before having the plug pulled due to the studio (Tupi Network) going under. Only four episodes, lasting 45 minutes apiece, were made. The concept and main cast were then moved to another network, Rede Bandeirantes, for the vampire soap opera Um Homem Muito Especial / "A Very Special Man."
- The 1983 version of The Monkey's Paw appears to be shot-on-video and made for television.
- A Noite das Taras II is a two story anthology but only the first story (involving a serial killer of prostitutes) is genre. The original film, involving the sexual exploits of some sailors, isn't genre at all.
- There are probably more Sady Baby X-rated movies to include here. Based on some plot synopses I've read, a lot of them have horror content and gore... and many of them sound pretty sick!
- The 1990 release Ivampirismo – O Cinema em Pânico is a collection of short films by Ivan Cardoso.
POTENTIAL ADDITIONS:
- I've got quite a long list of questionable films this time out (the titles listed below are just a portion of them!) that I may or may not end up including on the master list above. The main issue here, aside from most of these not being available in English, is that they all appear to be borderline titles. None are classified as horror on most websites, though I have seen them mentioned in discussion or on other lists. This basically just boils down to hearing back from some of you or finding a way to check these films out for myself.
- Noites de Iemanjá (Nights of the Water Goddess) (1971; Maurice Capovilla)
- Guru das Sete Cidades (Guru of the Seven Cities) (1972; Carlos Roberto Bini) - Satanic cult
- Longo Caminho da Morte (Long Way of Death) (1972; Júlio Calasso Jr.)
- Prata Palomares (1972; André Faria)
- O Descarte (1973; Anselmo Duarte)
- Amadas e Violentadas (Loved and Abused) (1975; Jean Garret)
- O Sósia da Morte (Doppelganger of Death) (1975; Luiz de Miranda Corrêa, João Ramiro Mello)
- Pecado na Sacristia (Sin in the Sacristy) (1975; Miguel Borges) - folklore creatures
- Belinda dos Orixás na Praia dos Desejos (1979; Antonio Bonacin Thome)
- Escalada da Violência (Escalation of Violence) (1982; Milton Alencar)
- Ninfetas do Sexo Selvagem (Wild Sex Nymphets) (1983; Fauzi Mansur)
- Estrela Nua (Naked Star) (1984; José Antonio Garcia, Ícaro Martins) - possession
__________________________________________________
Any questions, additions / subtractions or comments, please comment below.
Posted by The Bloody Pit of Horror at 5:27 PM 2 comments: