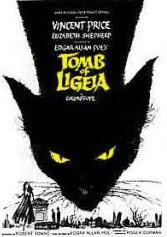 Corman's last of eight Poe films is based on the poem of the same name and is an excellent metaphorical ghost story; one of the best in the entire series, actually. It's also atypical for this series because outdoor location work is utilized instead of all the action taking place within the cramped, claustrophobic confines of castle walls. Lady Rowena (Elizabeth Shepherd) falls in love with Verden Fell (Vincent Price) despite his strange behavior and questionable past. Soon after their marriage, he starts to disappear quite frequently and she's not only menaced by that old Poe stand-by, the evil black cat, but also plagued by horrific nightmares involving Verden's deceased former wife Ligeia (also played by Shepherd), whose ghost seems intent on ruining the union. Price, in top hat and strange sunglasses in many scenes (his vision being "dangerously acute" ), may be a little long in the tooth for this role, but he still manages to come through with a good performance, and Shepherd is excellent in her dual role. Corman has always been underrated for effectively capturing period detail on a limited budget and it's his keen eye for the crumbling ruins, lush green country sides, ocean fronts and shadowy castle corridors that make much of this film work. It was written by future Oscar-winner Robert Towne (CHINATOWN) and was Corman's last horror film as director until 1990's FRANKENSTEIN UNBOUND.