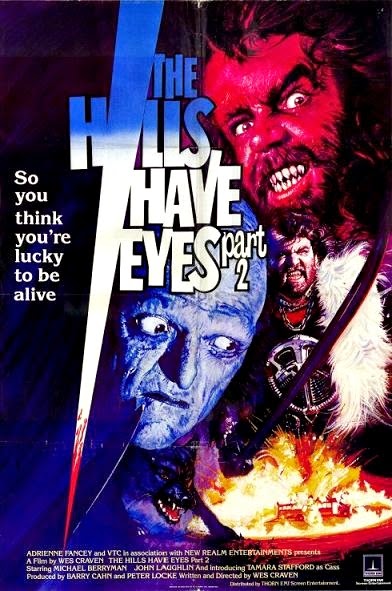 
Apparently desperately in need of money during his pre-Elm Street days, Craven agreed to write and direct this unnecessary follow-up to his 1977 cult classic. After filming most - though reputedly not all - of the original script, the backers reneged and pulled funding before it could be completed, leaving the unfinished film to languish on a shelf somewhere for a spell. It wasn't until after Elm Street's success that the studio convinced Craven to finally finish it. And no, he wasn't given money to shoot the rest of the footage, he was simply left with the task of piecing together what was shot and then padding the rest out with "flashback" footage from the first. To tie it to the original, several cast members return to reprise their roles and the same basic premise and desert setting are retained, but the tone and the approach to the material is quite different this time out. In fact, comparing the two, there's such a chasm in quality it's almost impossible to believe the same man could possibly be responsible for both movies. This sequel seems more like a second-rate, unsanctioned cash-in made by an inept, inexperienced hack attempting to capitalize on the first film's success than it does a film from an already-established and typically competent filmmaker. It's no wonder Craven later disowned the film. 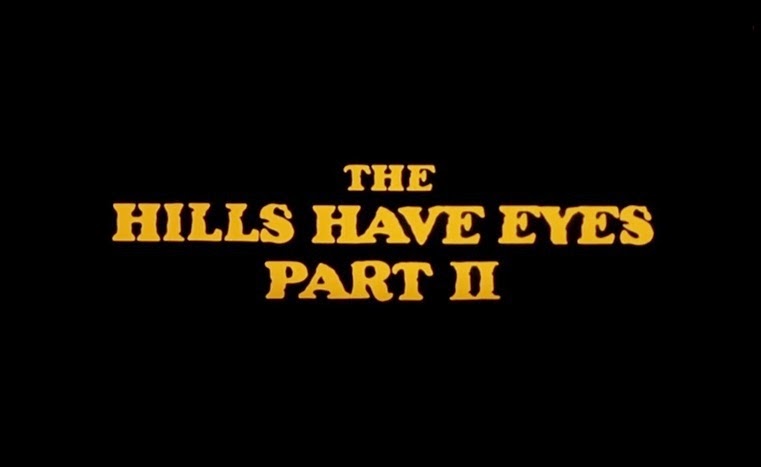 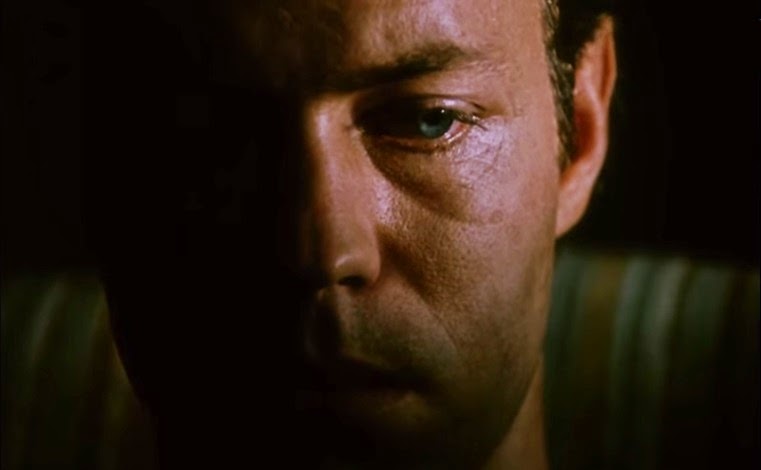 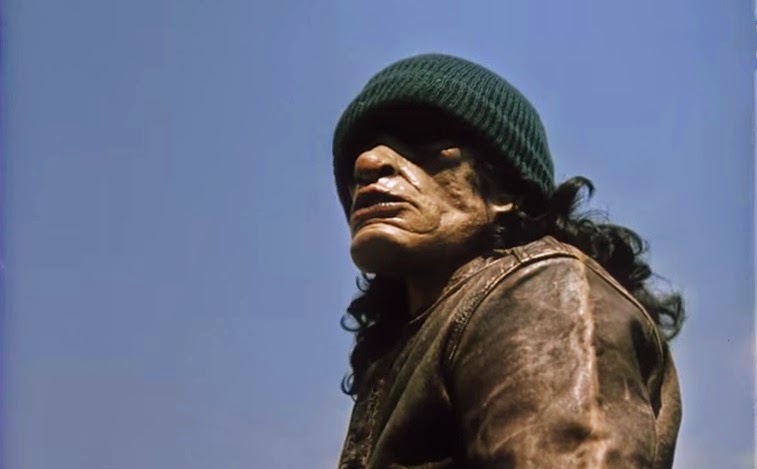 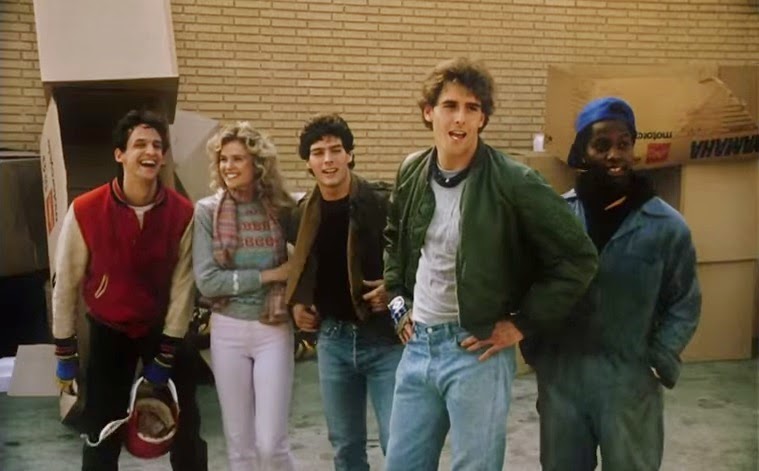 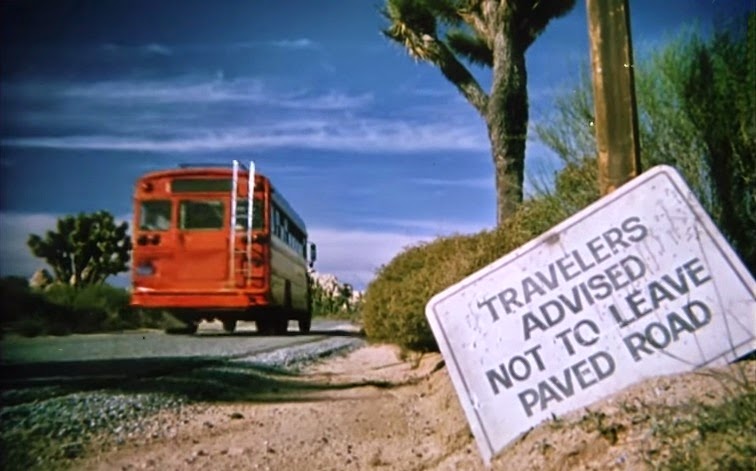 After the opening credit scroll informs us that "The following film is based on fact" (mm hmm), we briefly catch up with original Hills survivor Bobby Carter (Robert Houston). Still traumatized by the events of the first movie, Bobby finds himself unable to accompany his buddies across the desert to a motocross competition to test out their new "Super Formula Racing Fuel." Going in his place is his friend Rachel (Janus Blythe), who, as "Ruby," was a member of the desert-dwelling family of the first film but is now a reformed ex-cannibal after having helped the Carter family put an end to her brood's murderous ways. Or so she thinks. Along with three racers, a mechanic, a few girlfriends and "Beast," the same German Shepherd from the first movie, Rachel / Ruby soon finds herself back in familiar territory. Running short on time, the crew decide to venture off the main road and take a shortcut, their bus breaks down near an abandoned mine and then the rest plays out like business as usual as Pluto (Michael Berryman) and Papa Jupiter's hereunto unmentioned big brother "The Reaper" (John Bloom, dubbed by Nicholas Worth) start picking them off one by one. 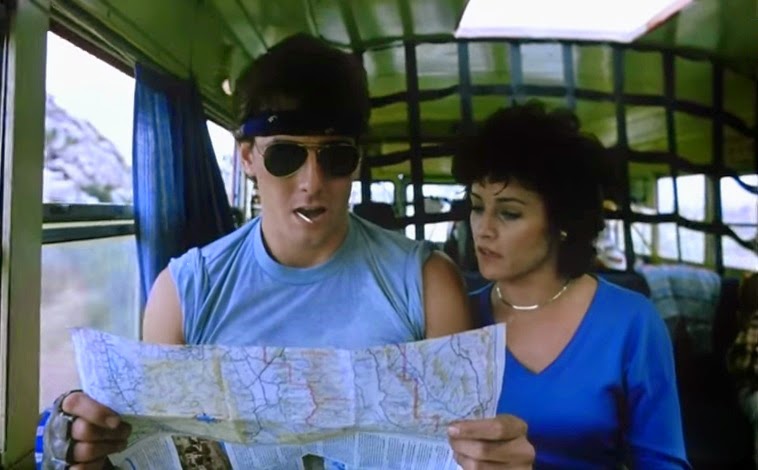 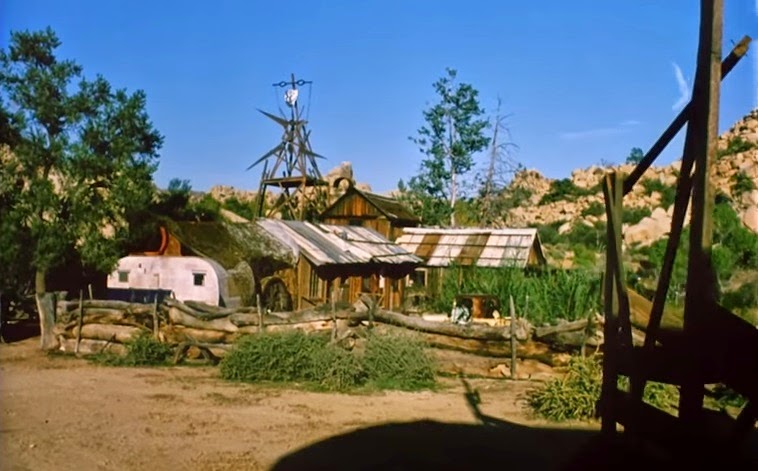 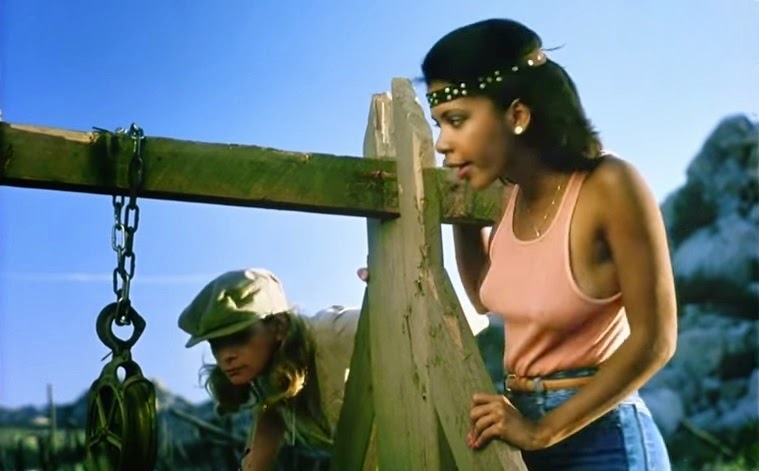 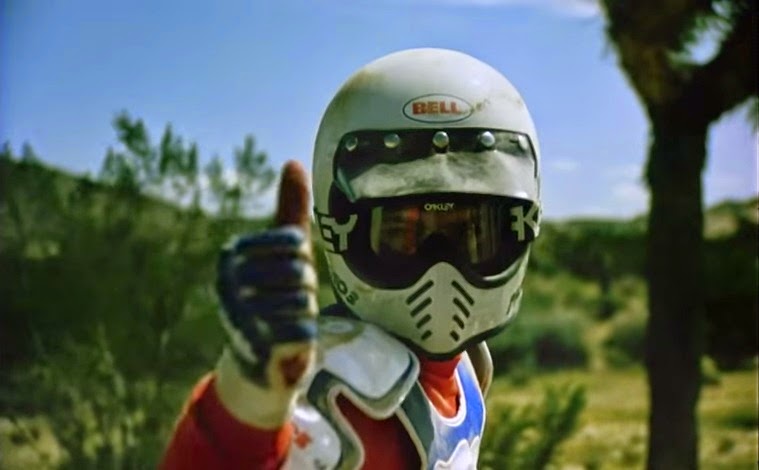 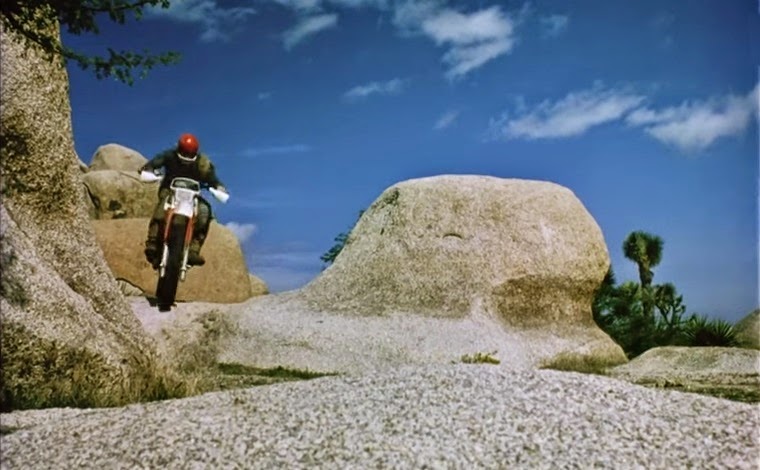 Gone is the original film's intelligent subtext centered around two vastly different families clashing over harsh terrain and an ordinary, mild-mannered middle-class family forced to turn as vicious as their attackers in order to protect themselves. In its place we get a handful of obnoxious, ill-defined cardboard teenagers spouting insipid dialogue that no one could possibly care anything about. While the first film was a tense, bleak survival film, this one is presented just like any number of other poorly-made slasher flicks with characters who continually do senseless and idiotic things, pitiful attempts at comedy and terrible dialogue ("You're not feeling psychic today are you, you know, like you sometimes do?"). The slasher feel is reinforced further by Harry Manfredini's rehashed music, which is nothing more than recycled bits and pieces from the Friday the 13th series. I could even live with all that, but this film is genuinely inept and filled with continuity errors and lapses in basic logic. It's almost mind-numbingly stupid... and the absurd moment the dog has his own flashback is really just the tip of the iceberg! 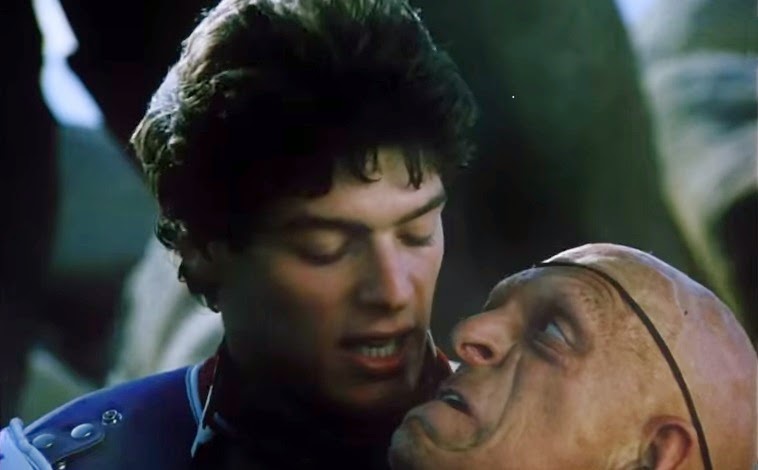 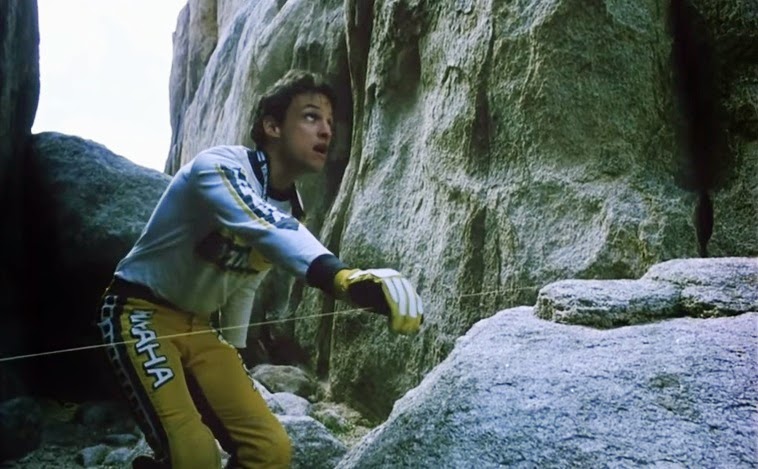 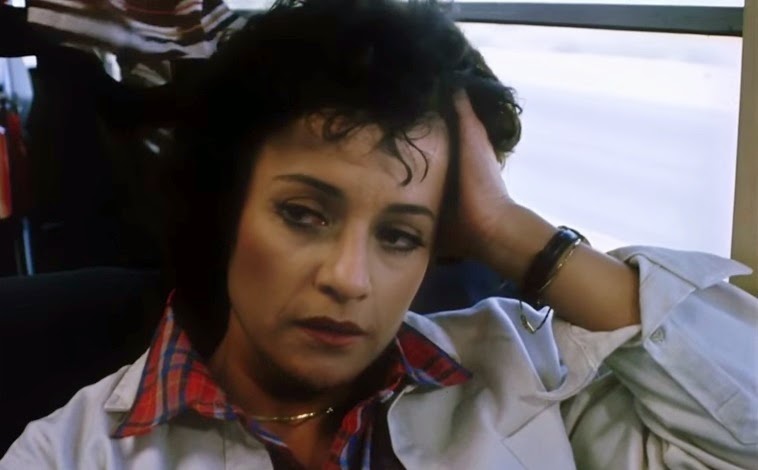 I think this is exactly what my face looked like watching this. 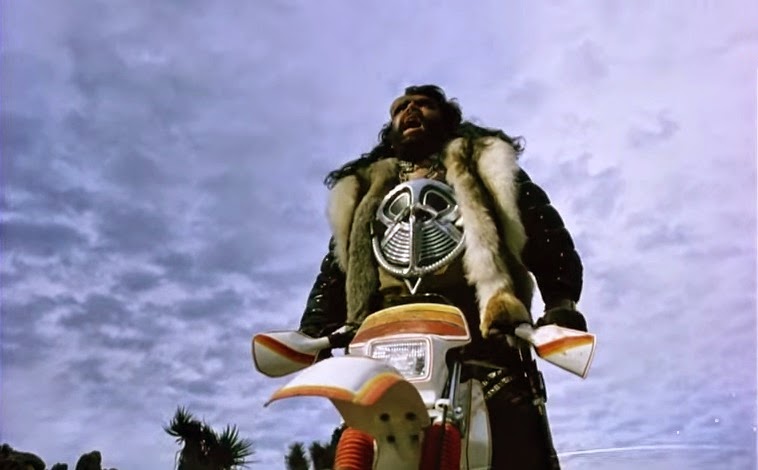 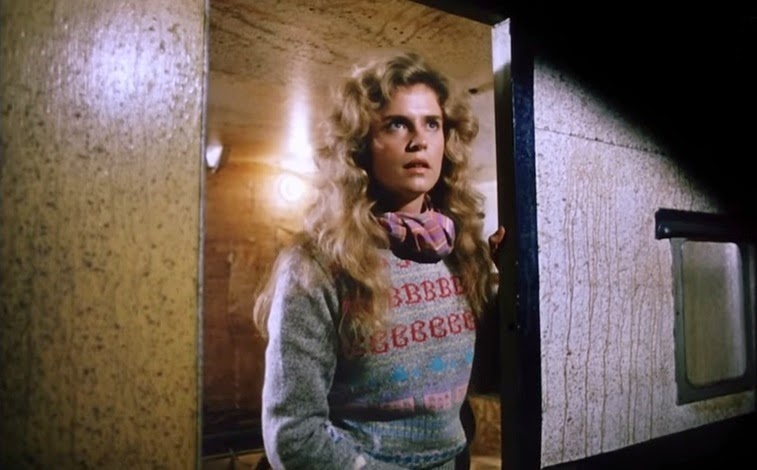 Early on, Rachel has a run-in with Pluto and uses karate (!) to defend herself. Immediately afterward she's shown laughing and joking along with the rest of the cast and accusing two guys who have disappeared of "playing pranks too hard" instead of putting two and two together they may have been killed by the psycho cannibal who'd just attacked her, you know, a few moments earlier. After she leaves the teens in her charge to go look around, they proceed to joke, play pranks on each other and and idiotically wander off by themselves so they can get killed. The movie probably reaches its low point when one of the cannibals steals a motorcycle, slaps on a helmet and starts driving around the rock cliffs while laughing maniacally. I wasn't even sure if this was supposed to be funny or not. 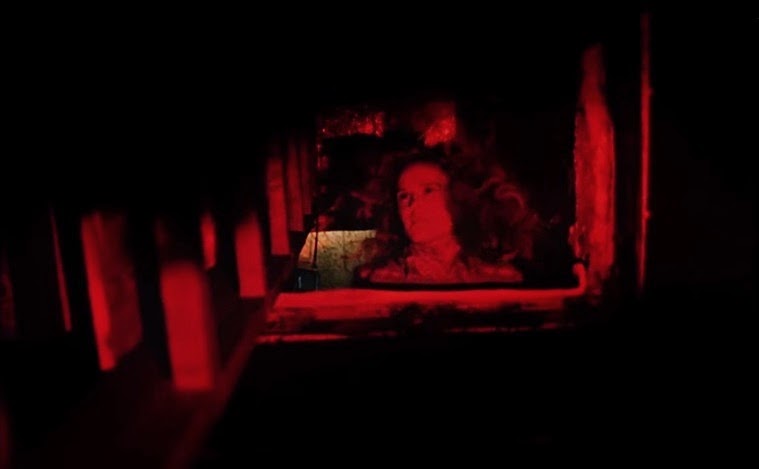 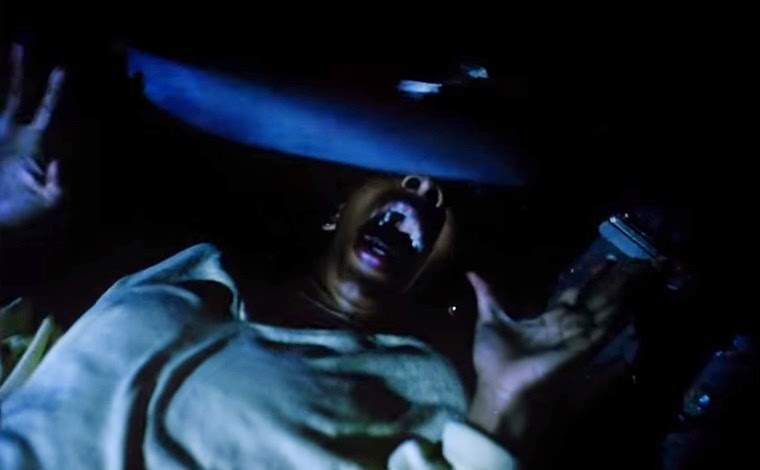 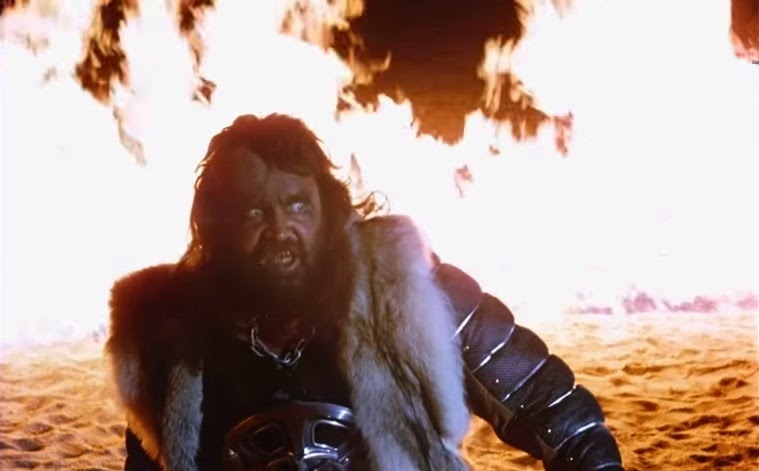 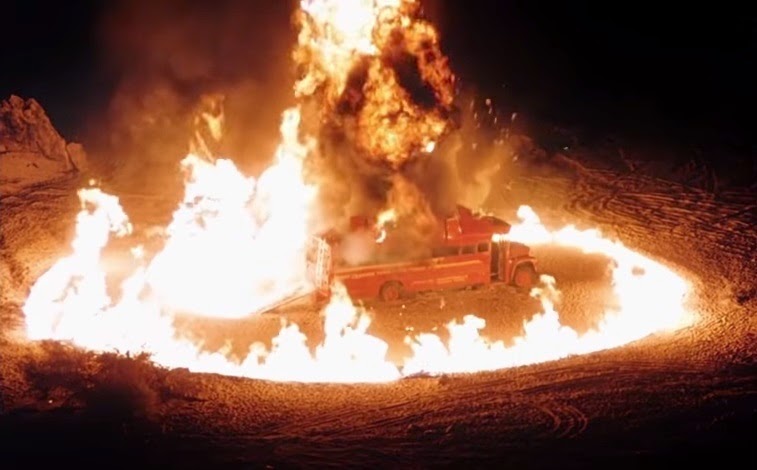 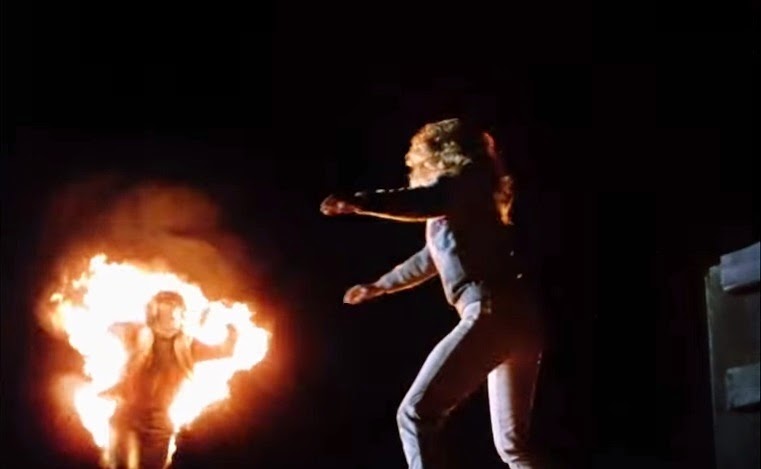 The murders themselves are also rather tame. Someone's crushed by rocks and there are a couple of booby traps but most are just yanked off-screen and then found dead later on. The only gory moment is when one of the girls gets her throat cut and even that's not much. For what it's worth, our heroine (Tamara Stafford) is blind and has some kind of extrasensory perception, though the script doesn't really make novel use of either concept. The only thing this really has going for it are some nice-looking outdoor shooting locations and the underground lair the last few scenes take place in. Other than that, it's terrible. Even the thoroughly underwhelming sequel to the remake is much better than this. Kevin "Blair" / Spirtas (Friday the 13th 7), Colleen Riley (from Craven's Deadly Blessing), Penny Johnson, Willard E. Pugh, John Laughlin and the irritating Peter Frechette co-star. The bare bones DVD is from Anchor Bay.

★
Posted by The Bloody Pit of Horror at 6:31 PM No comments: