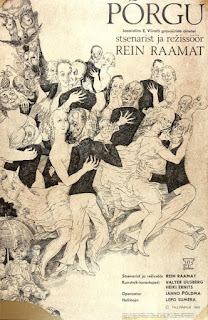 ... aka: Ад
... aka: Enfer
... aka: Hell
Directed by:
Rein Raamat
Typically horror anthology films use short stories (sometimes original, sometimes not) or condensed portions of longer novels as the basis for their tales. This one, however, has a very interesting idea to use actual individual pieces of artwork as the basis. The inspiration for this 17-minute animated short is Estonian graphic artist Eduard Wiiralt [1898-1954], who worked in many different mediums during his career but is best known for his engravings, lithographs and etchings. The "three surreal engravings of enormous generalizing power" used, all of which date back to the early 1930s, are Jutlustaja ("Preacher"), Kabaree ("Cabaret") and Põrgu ("Hell"). Before viewing this, I wanted to take a look at each of these pieces, and mull over them a bit, just to get some idea of what I felt the director needed to accomplish to capture the true spirit of the art. The first thing that leapt out at me was just how busy all of these engravings are. From left to right and top to bottom, there's no wasted space. These are filled with action, distinct and interesting-looking characters and numerous tiny little details to pick up on. I'm going to go ahead and post all three of the inspirations behind this short below so you too can first take a gander at them and then see how well they stack up to Raamat's film adaptation.

Though all of these pieces have a grim undercurrent, there's also dark whimsy and humor to be found in them. Kabaree, for instance, features adults indulging in drink, smoke, dance, music and lewd entertainment (dancers in sheer dresses and outright topless women), but tucked away in the left corner is a multi-breasted fountain pouring milk to children while elsewhere another baby is seen hidden under a table being breastfed while his mother simultaneously drinks.
Behind the fountain's milk streams there's also something else unusual; a passed out man who doesn't appear to fit in with the rest of the crowd. While the other male cabaret guests are clean-cut, short-haired, shaven and well-dressed bourgeoisie types, this guy has long hair and a beard, plain clothes, is the only unconscious person in the entire piece and appears to represent something else entirely. It could be he's meant to remind us of a certain famous religious figure who's asleep on the job while everyone else is busy sinning it up. Perhaps he's already tried to reach them but has since just given up. Or this figure could well represent the working class out of their element or perhaps stunned into submission by the decadence or lack of morality of a ruling / upper class that generally sticks its nose up at his type. I'm not so sure but it's all interesting to think about. 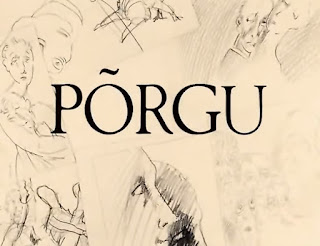 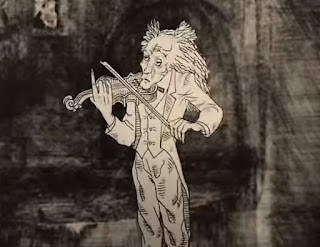 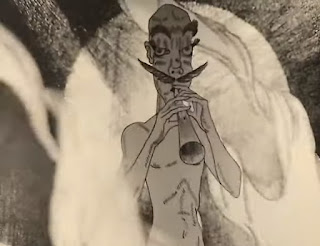 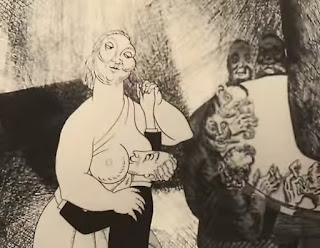 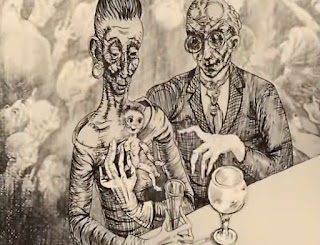 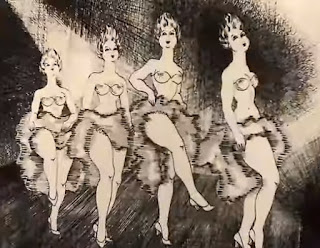 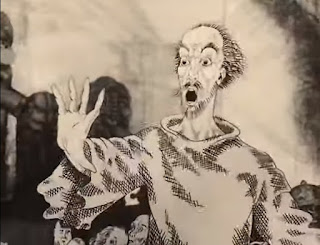 Right from the beginning it's obvious just how much care went into doing the original artist's work justice. There are exact replicas of nearly all of the characters found in each of the engravings; the cabaret dancers, the musicians, the old couple sitting at the edge of the bar, the tiny man lost in his dance partner's generous cleavage...; all meticulously-drawn (mostly using cross hatching) to match Wiiralt's characters. However, highlighted most of all at the beginning are a thin, older violin player and a nude, more menacing-looking bald man playing a horn while fire wisps around him. Of course these figures are meant to represent the good and the evil of the scenario. There's nothing wrong with having a good time and enjoying yourself... but there are limitations to that, right? Yet the insatiable cabaret patrons don't know the meaning of moderation and work themselves into exhausted lumps on the floor before all is said and done. 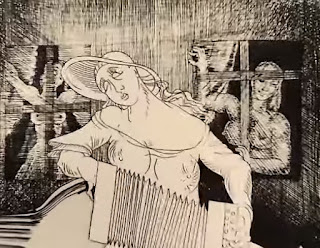 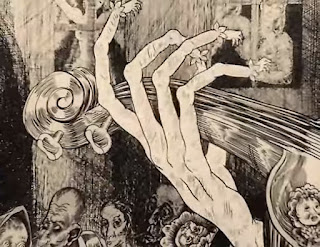 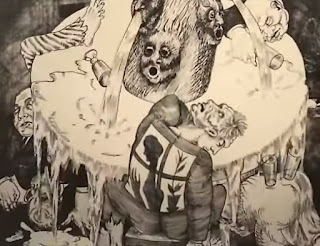 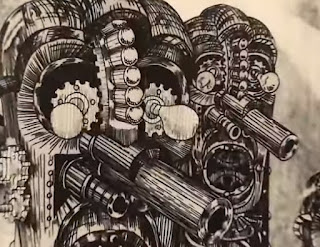 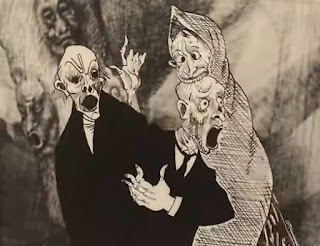 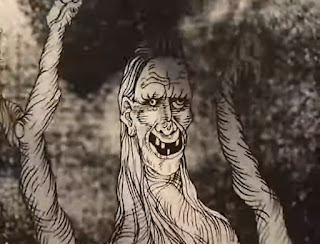 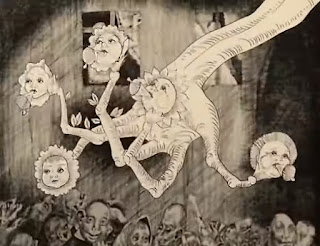 As opposed to the "start-stop-insert title for next story" format other anthology-style films employ, this one uses a slicker overlap between stories, with all three of the art pieces being blended into a cohesive whole. The Preacher from Jutlustaja turns up in the cabaret and attempts to silence the horn-playing demon man (who's been carried over from the Põrgu piece himself), but it's only temporary and he starts up yet again, energizing the patrons. However, the gun-nosed robots from Põrgu then appear and start shooting everyone in sight and the people start transforming into some of the nightmare figures seen in the Põrgu engraving. Characters are ripped apart by tentacles, turned into trees and animals and heads explode into mushroom clouds. 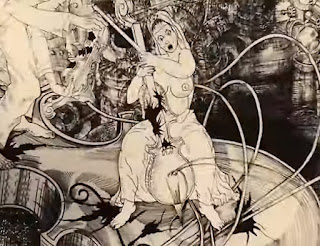 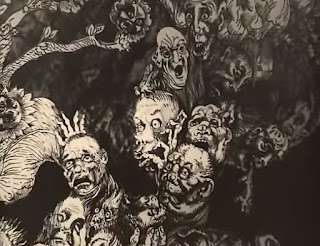 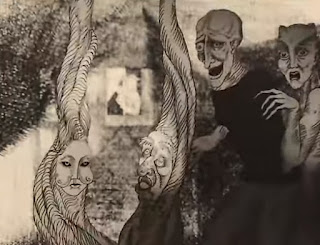 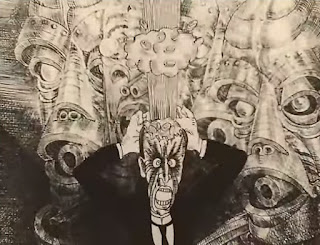 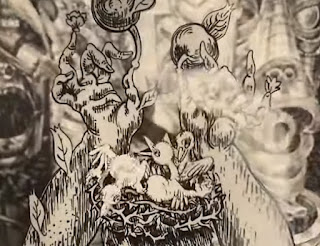 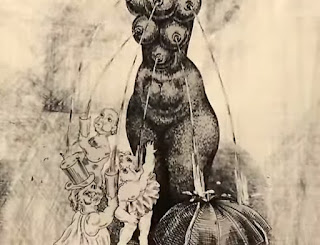 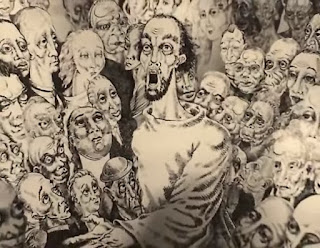 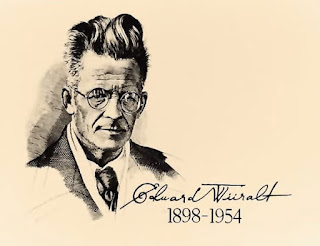 Reading up a bit about Estonian history, both where it was when the original engravings were made (in the midst of the Great Depression during a transitional period between major wars and various occupations and the region on the verge of the Era of Silence) and where it was when this animated adaptation was made (declining standards of living under long Soviet occupation) certainly sheds some light on the proceedings. Estonia's long battle toward independence was finally won in the early 90s when the former ESSR (Estonian Soviet Socialist Republic) became The Republic of Estonia. Though Estonian through and through, this is technically still considered a Soviet film because of when it was made.
This won numerous awards at various film festivals, including top honors at the Annecy International Animated Film Festival. There was a 2011 DVD release through Tallinnfilm, who've paired it with two other Raamat shorts: Kilplased / "The Simpletons" (1974) and Suur Tõll / Tyll the Giant (1980). It's also easy to find on Youtube and no subtitles are needed aside from the opening title cards and the brief introduction as there's otherwise no dialogue.
★★★
Posted by The Bloody Pit of Horror at 7:18 PM No comments: