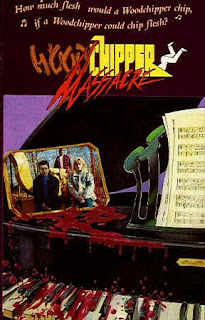 Directed by:
Jon McBride
Donna Michelle Productions was a very short-lived indy distributor who pissed off a lot of people during the 80s by releasing some of the absolute worst amateur home video horrors known to man. Their catalogue included such titles as THE ABOMINATION (1986), SPLATTER FARM (1987), the seldom-seen documentary MONSTERS & MANIACS (1988) and this would-be black comedy from the same guy responsible for CANNIBAL CAMPOUT (1988), also a Donna Michelle exclusive. There's no two ways about this one. You'll either find it amusing and endearingly awful or you'll want to rip your hair out one strand at a time from sheer aggravation. Unfortunately, I'm in the second camp. The loud overacting and incessant mugging for the camcorder from the entire obnoxious cast is downright merciless. It just never stops. I found it slightly amusing for about five minutes... And then I just wanted to be put out of my misery.
.
Dad (Perren Page) is going to be out of town for business, so he leaves his three kids - eldest son Jon (the director), middle daughter Denice (Denice Edeal) and youngest Tom (Tom Casiello) - in the care of their dear Aunt Tess (Patricia McBride) for the entire weekend. Tess is not only a terrible cook but she's also a fascist, religious nutso bitch who never shuts up and won't let them watch horror movies. She refuses to let grown Jon go on a date. Denice can't even dust a table to her satisfaction. And she forbids little Tom from listening to rock music, demands he clean his pig sty of a room and tries to confiscate his prized Rambo survivalist knife as soon as he gets it in the mail. Not only that, she has a catalogue of annoying bible quotes and old school phrases that constitute the majority of her dialogue.
.
During a struggle in the kitchen over the knife, Tom accidentally stabs auntie. The three then decide to dismember her corpse, freeze the body parts and then feed them through a wood chipper in the backyard. So what are they gonna do when Tess' ex-con son Kim (Kim Bailey) shows up looking for his momma and some money? Probably exactly what you think they're gonna do. But will they be able to adequately disposes of two bodies and clean up the yard before dad gets back? The suspense just wasn't killing me and this barely even qualifies as a horror film, let alone a "massacre." I don't really hold that against it, but what I do have a problem with is the fact none of this was particularly clever or funny and it's far too tame to be the outrageous black comedy it so desperately wants to be. The cartoon-like music score is appropriate for the material but the director seems to have coached the cast to scream every one of their lines, likely so the camera's built-in microphone would pick it up.
.
Mr. McBride would later form an unholy union with the Polonia Brothers, which would result in such efforts as FEEDERS (1996), FEEDERS 2: SLAY BELLS (1998), BLOOD RED PLANET (2000) and many more. Even though there are thousands of excellent movies out there with no DVD release, this one has one (complete with audio commentary) from the recently revived Camp Motion Pictures.
★1/2
Posted by The Bloody Pit of Horror at 10:50 PM No comments: