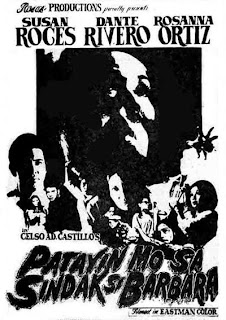 ... aka: Kill Barbara with Panic
... aka: Scare Barbara to Death

Immediately after THE EXORCIST (1973) became a huge sensation and one of the highest grossing films of its year, came a wave of copycats, wannabes and the rare few that actually managed to do something interesting with the demonic possession concept. Nine times out of ten, the victim of the possession was an innocent female and most of the films were vulgar, sleazy and cheap. Many were made in Europe, including the medium budget THE ANTICHRIST (1974), BEYOND THE DOOR (1974), THE EERIE MIDNIGHT HORROR SHOW (1974), NAKED EXORCISM (1975), NIGHT CHILD (1975) and others from Italy, DEMON WITCH CHILD (1974), EXORCISMO (1974), EXORCISM'S DAUGHTER (1974) and LORNA THE EXORCIST (1974) from Spain, OBSCENE DESIRE (1976; an Italian/Spanish co-production), DEVIL'S FEMALE (1974) from Germany, SEYTAN (1974) from Turkey, ALUCARDA (filmed 1975; released 1978) from Mexico and so forth. In America, the made-for-TV cult deprogramming drama CAN ELLEN BE SAVED? (1974) included an exorcism, as did another TV movie called THE POSSESSED (1977). ABBY (1974) - a black cast spin with a church singer possessed by an African demon - emerged as one of the brightest efforts, and RUBY (1977), which featured Piper Laurie fresh from her success in CARRIE, did well at drive-ins (and was actually set at a drive-in). Warner Brother sued the makers of *some* of these films, but not all. Despite being one of the better efforts, Abby was one of the victims and had to be yanked from theaters after pulling in an impressive 4 million dollars in less than a month. The makers of Beyond the Door also faced a lawsuit and had to withdraw their film (though it became a modest hit itself - despite being awful). 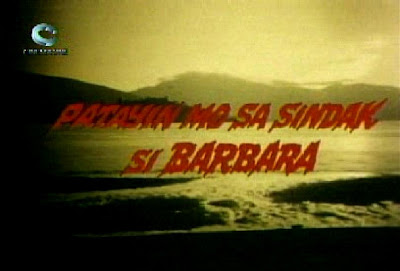 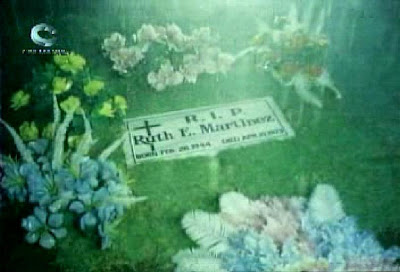 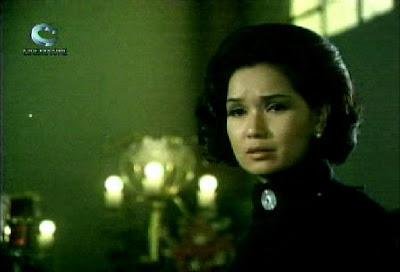 In addition to the films actually made in reaction to the success of The Exorcist, one made before it were often re-titled and re-released to cash in, even when they had absolutely nothing to do with demonic possession. 1966's NAKED EVIL was reissued in 1973 as Exorcism at Midnight, 1972's DADDY'S DEADLY DARLING became The Strange Love Exorcist, Fulci's DON'T TORTURE A DUCKLING (1972) became The Long Night of Exorcism, TRAGIC CEREMONY (1974) became Tragic Exorcism and new scenes were tacked onto Bava's LISA AND THE DEVIL (1973) and it was re-released in 1975 as The House of Exorcism. One forgotten film in this cycle was the Filipino obscurity Patayin mo sa Sindak sin Barbara (awkwardly translated to "Kill Barbara with Panic"), which was never released in America. And that's a shame because it is far superior to most (if not all) of the ones listed above. It's also never been released on DVD, while such worthless efforts as Exorcismo and Beyond the Door have received restoration and deluxe treatment. Yes, I know. There's little rhyme and reason behind this stuff. Well, aside from what any given distributor assumes is the bottom dollar. 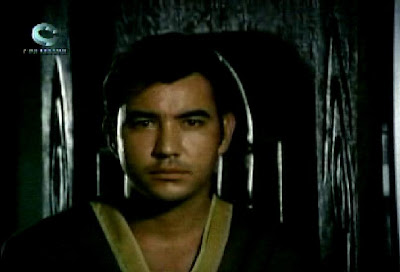 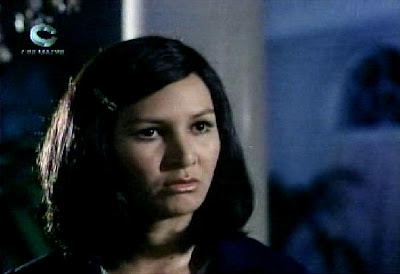 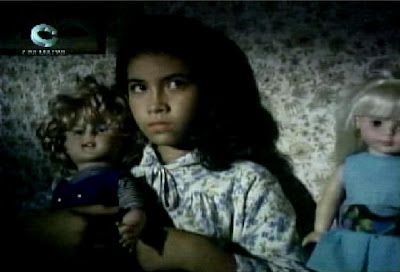 Barbara (Susan Roces) has been away from home for awhile. It takes the unexpected suicide of her sister Ruth (Rosanna Ortiz) to bring her back. After the funeral, she goes to stay with her brother-in-law Fritz (Dante Rivero) and distraught young niece Karen (Beth Manlongat) in the family's large mansion, which Barbara forfeited her rights to after the passing of her parents. Also living in the home are two other women; Karen's nanny Erlyn (Edna Diaz) and Miss Esguerra (Ellen Esguerra), Fritz's personal assistant. Via flashback, we learn that Ruth and Fritz had a very troubled marriage. After hearing from a psychic that her husband is being unfaithful, Ruth confronts him. He denies it but refuses to swear before a cross, so she hits him over the head with it! Frantic, Ruth locks herself into a room, curses him and then starts throwing stuff around, destroying a mirror in the process. She picks up a huge shard of glass and stabs herself repeatedly in the stomach with it. On her deathbed, she tells her husband "I'll never leave you in peace! I will never stop until I get revenge!" and instructs her daughter to keep a particular doll by her side because it'll be just like having her there. And she's right. It is just like having her there since it'll be the portal for her to enter back into our world. 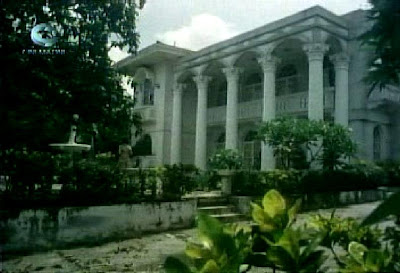 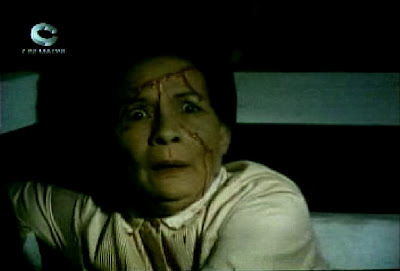 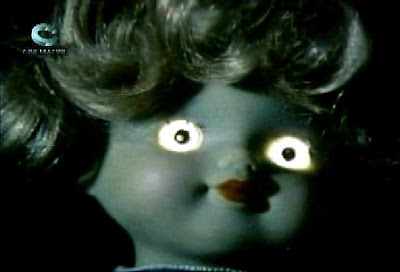 With the back story revealed in the first fifteen minutes, it doesn't take long before ghostly things begin happening. Barbara has a nightmare vision of the doll with glowing eyes and sees a vision of Ruth's ghost at the cemetery. The daughter begins playing the piano just like her deceased mother and shows other signs that her body has been inhabited by her restless spirit. Ditto for her creepy little doll, which walks on its own and pops up all over the place covered in blood. Furniture moves and paintings fall off the wall. The phone rings and the childish voice on the other end tells Fritz "I'm coming. I hate you. I'm going to kill you." (the movie is in Tagalog but for some reason this moment and several others are spoken in English). 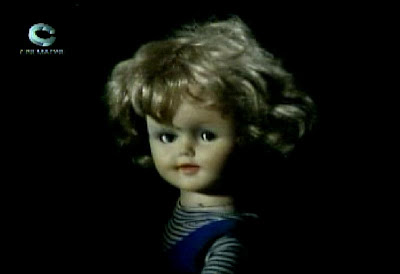 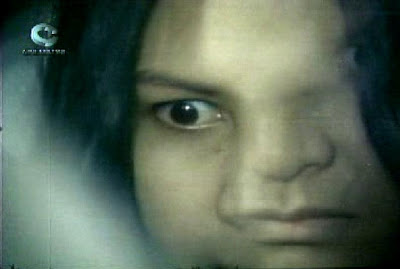 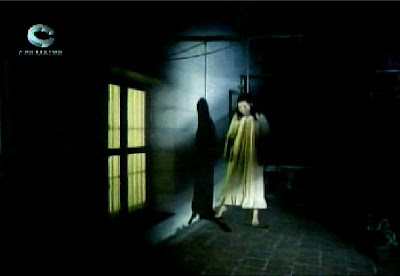 Interestingly enough, Ruth is actually wrong about her husband being unfaithful. He simply fell in love with his sister-in-law (and vice versa), though neither party has ever acted upon it. And so, this is not really a case of a woman scorned, it's a case of an unhinged woman who just thinks she's been scorned. But that doesn't stop Ruth from using her own daughter as an instrument for revenge. After Fritz is seriously injured from being knocked down the stairs, Barbara and Erlyn decide to take Karen to the island home of elderly priestess Aling Benita (Mary Walter), who eventually attempts an exorcism with a huge mirrored cross while Ruth's spirit enters and exits young Karen's body. By this point, the malevolent entity is strong enough to cause physical harm without even requiring a host. 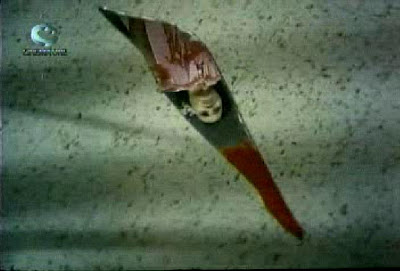 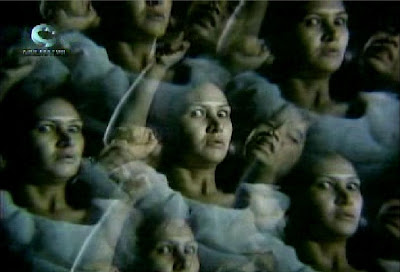 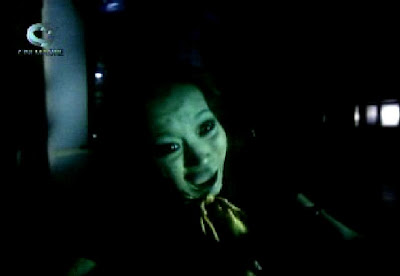 A lot is going on here, and therein lies a problem during the first half of the film. One minute little Karen is speaking in her dead mother's voice, the next it's moving the doll around and then a minute after they'll show a random old dead woman outside hanging by a noose. Who the woman is is never discussed. Many things happen that are never discussed, or something horrific will happen and then the characters behave as if it never did by the next scene. The first hour has interesting and creepy moments spread throughout, but it's all a bit jumbled. Thankfully, the second half of the film set on the island really makes up for the clustered and often confusing first half. 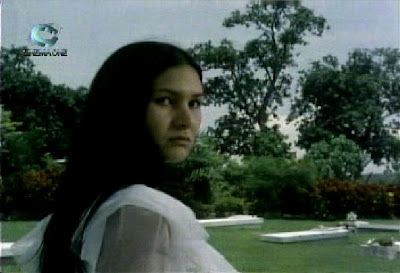 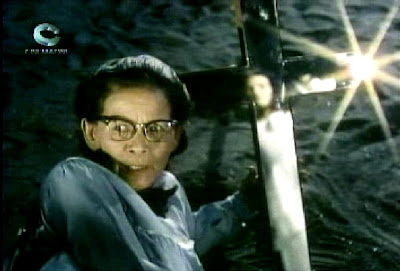 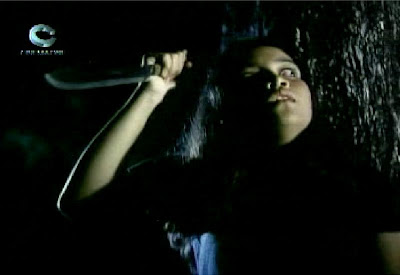 Working with a limited budget, the director and whoever did the cinematography show true ingenuity in creating an aura of the supernatural. I'm sure you've heard of the phrase "smoke and mirrors" to refer to using simple tricks to create a certain illusion. Here "light and mirrors" is more applicable because they use both to create some cool otherworldly fx. And if you pay careful attention, the director is even meticulous enough to insert clever things into the backdrop, such as a shadow cutting across the portrait of a once-happy couple. There's a haunting music box theme used at times, and the film gets rather bloody at the conclusion (plus provides one great jump-out-of-your-seat moment). All of the actors are quite good, and most were established stars in the country. Roces is great in the conflicted lead role, Ortiz is intense and menacing as the crazed sister and young Manlongat gives Linda Blair a run for her money in the possessed child category. The latter actually won Best Child Actress at the FAMAS Awards (the Filipino Oscar equivalent). Roces was also nominated for her performance, as was the picture itself. 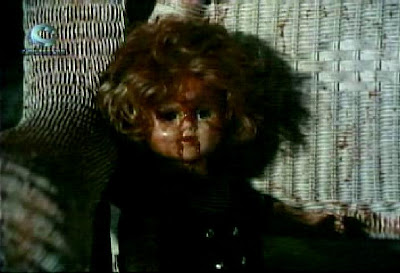 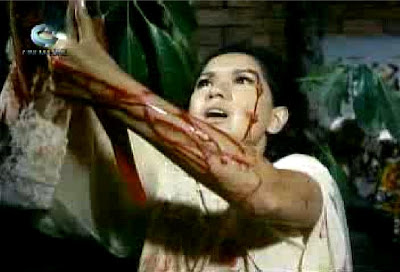 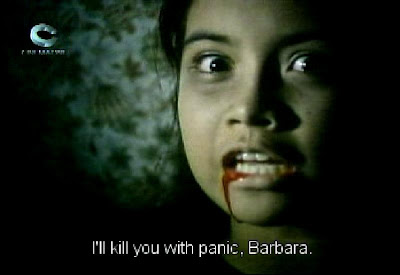 Shame this one's so difficult to find. The print floating around right now is of substandard quality and has a "Cinema One" logo on screen the entire time since it was taped from a long-ago TV broadcast.