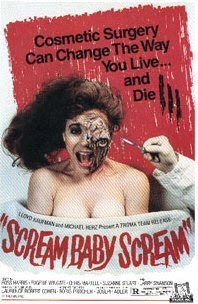 Directed by:
Joseph Adler
Maybe you have to be a former hippie to fully appreciate this, because aside from some dated fashions, music and dialogue, it doesn't really have anything going for it. Four fun loving college art students enjoy carefree days of painting nude models and riding on motorcycles. They take acid in one scene and go to a zoo. A sign flashes on the screen that says "Do Not Feed The Animals", and suddenly they're in a cage laughing and hanging from a chain tire swing (?) An evil artist (Larry Swanson) tells (in flashback) how his art career was almost ruined because of a crippling hand disease. He sends out zombie henchmen dressed in black to kidnap people, then injects them with a serum that distorts their faces. He's trying to create some new form of abstract act, I guess. Jason (Ross Harris) sets out to save the day after his friend Scotty (Chris Martell, who also gets a music credit) is killed and his girlfriend Janet (Eugenie Wingate) is kidnapped.
I thought the zombie make-up in ZOMBIE LAKE was awful, but wait until you see it here. It's by Douglas Hobart, the star of DEATH CURSE OF TARTU. A small role is played by Brad Grinter, the director of BLOOD FREAK! Pointless trivia note: The 1984 Regal video release features the wrong cast (for THE BRIDES WORE BLOOD) written directly on the video label.
NO STARS!
Posted by The Bloody Pit of Horror at 1:46 AM