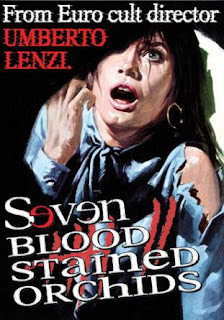 ...aka: Puzzle of the Silver Half Moons

...aka: Sette volti per l'assassino
...aka: Seven Blood-Stained Orchids


Don't be surprised if you pick up strong feelings of déjà vu (or even find yourself starting to nod off) while watching this standard-issue murder-mystery based on an Edgar Wallace story. The 'Orchids' of the title are a bunch of inexplicably attractive young women (plus an elderly one who is done in at the very beginning without nary a line of dialogue) being targeted by a leather-gloved-wearing serial killer who wants them all dead. The only thing linking the victims together is that they all stayed at the same hotel during the same weekend, right around the same time a man was killed outside the place in a car accident. The killer sometimes calls his victims up prior to killing them and also tempts the cops on the case by leaving behind a calling card; silver crescent half moon medallions. I guess George Hilton wasn't available, so Antonio Sabato gets to headline this one. He's pretty bland as Mario, husband to one of the targets; cute, wide-eyed new bride Giulia (Uschi Glas). While the two are aboard a train headed to their honeymoon destination, the psycho attacks Giulia and slashes her shoulder with a knife, but he's forced to flee before he can finish the job. The police stage a bogus funeral and run a bogus obituary in the newspaper so the killer thinks she's actually dead. Annoyingly, instead of staying in hiding, Giulia accompanies her hubby as he goes to the hotel to look at the register, then later reveals to the press she's actually still alive in an effort to bait the killer. All the while, other women filter in and out of the movie every ten minutes or so, a few (including giallo regular Marina Malfatti) flash their breasts and all are killed in unexciting ways in scenarios that fail to shock, scare or build up any kind of tension or suspense. The only bloody kill involves a woman whose chest gets drilled. It's all gets a little monotonous and redundant after awhile, with dullard Sabato going from place to place and talking to various suspects.

The killer in this movie has no clue who was responsible for the accident, so instead he decides to just kill them all. Fair enough, but this poor nutcase seems to have pretty bad luck. He's not very proficient, seeing how he botches two different kills. The first botch is Giulia's (hard to believe he actually thought she died from the scratch he inflicted on the train); the second is a very silly twist that involves twins. He's trying to kill Anna Sartori and... Oops!... He accidentally kills her identical twin sister Maria instead! The police run another fake article and also urge Anna to just hide and keep quiet. Meanwhile, the police (led by Pier Paolo Capponi) prove to be the most thick-headed people around. When one of the main suspects commits suicide, the police assure the two surviving ladies they can now breath easy. Oops again! I won't divulge the identity of the killer here, but let's just say the final revelation is one of those incredibly lame pulled-out-of-thin-air "shock" endings that make you groan in disbelief. Besides, it's the same exact twist used for at least three other major gialli that were released the same exact year! That definitely puts a damper on the proceedings.

So in short Seven Blood-Stained Orchids sure ain't no masterpiece. It's also not terrible. It just kind of is. Average plot, average execution, average acting and average production values, with too few surprises and not enough style and panache to elevate it above the pack. Lenzi's direction and the visual presentation are acceptable, but both are a little on the flat, unimaginative side. The usually estimable Riz Ortolani's sleep-inducing, repetitive score certainly doesn't help either. Also in the cast are Marisa Mell as the twins, Renato Romano as a priest, Rossella Falk, Bruno Corazzari, Franco Fantasia and Tom Felleghy.
.
The Shriek Show DVD extras are decent, including liner notes, an art gallery, interviews with the director and actress Gabriella Giorgelli (who has a tiny role as a topless prostitute), plus the trailer and additional trailers for Eaten Alive (1980) and Spasmo (1974). 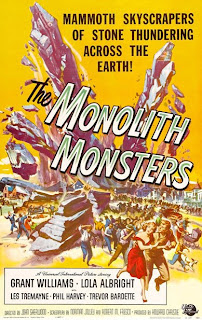 
A very interesting premise and an unusual and completely different kind of "monster" separates this from other 50s sci-fi/horror hybrids. After narrator Paul Frees tells a little bit about meteorites, one crashes on Earth and explodes, scattering numerous black crystal-like rocks right outside the small Southwest desert town of San Angelo. Geologist Ben Gilbert (Phil Harvey) finds one and brings it back to his lab for analysis. When the rock is exposed to water, it grows and quickly multiplies. And if anyone happens to be around while it's transforming, they too become infected with a disease that spreads through their body like a cancer, turning them to stone. When fellow geologist Dave Miller (Grant Williams, of THE INCREDIBLE SHRINKING MAN fame) returns from a vacation in Las Vegas, he discovers his colleage dead and their lab full of the black crystals. Meanwhile, Dave's school teacher girlfriend Cathy Barrett (Lola Albright) takes her young students into the desert for a field trip. A little girl named Ginny (Linda Scheley) gets her hands on one of the rocks, takes it home and tries washing it. After the rocks are linked to Ben's death, Dave and Cathy go to Ginny's home only to find it in ruins, the parents dead and Ginny's hand infected. She's then rushed off to a big city hospital, where Dr. E.J. Reynolds (Harry J. Cutting) tries to find a cure.


Back in San Angelo, a big thunderstorm saturates the ground, making the crystals spread at an alarming rate. Each crystal grows upward hundreds of feet until it can no longer support itself, then falls over and shatters into hundreds of pieces. Then the process is repeated with each new piece. At that rate, it wouldn't take very long for these things to take over the entire country, maybe even the world. Dr. Reynolds manages to cure little Ginny and relays the information back to Dave, who - with help from former teacher Arthur Flanders (Trevor Bardette) - tries to come up with the right combination of chemicals to stop the quickly-spreading menace before it destroys the entire town.


It was so-scripted by Robert M. Frescoe (who also wrote TARANTULA) and based on a story he co-wrote with pioneering genre director Jack Arnold (CREATURE FROM THE BLACK LAGOON). There's a lot of discussion about sulfur, silicates and saline solutions, but the science talk is kept simple enough to be easily digestible throughout. However, the premise isn't exactly resistent to criticism. Knowing good and well that the rocks have been responsible for several deaths, I doubt you'd see many scientists casually handling these things without gloves. When you factor in their reaction to water, I doubly doubt you'd want to be touching them without gloves in a desert climate where hands tends to sweat. You're also better off not to think too much about what effectively kills the crystals off at the very end of the film.


Though there aren't very many scenes of the "monolith monsters" in action, what is shown use effective and well-done small scale models of buildings and landscapes. The other major special effect of the meteor crash at the beginning of the film was borrowed from IT CAME FROM OUTER SPACE (1953), another Universal production.


The performances are uniformly fine. Les Tremayne has a good co-starring role as a newspaper reporter desperate for a decent story (who finally gets one, obviously) and William Schallert has an amusing cameo as a weatherman. Also be on the lookout for 60s sex symbol Troy Donahue in a (tiny) early role as a guy instructed to blow up a dam.