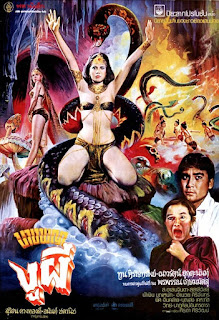 
A bunch of mysterious deaths occur in a small Thai village that are blamed on snake bites, so a bunch of locals are paid to capture / kill them as stolen music from Psycho II plays on the soundtrack. However, a thunderstorm late one night unleashes a bunch of them. The man who paid the snake killers is promptly bitten and killed just as his very pregnant wife goes into labor. After a knocked over lantern sets their hut on fire, the woman crawls outside, gives birth in the dirt and is promptly struck and killed by lightning (!!) One of the snakes then crawls inside her baby; possessing it. (For the record, they use a baby doll covered in blood for the infant. At first, I thought it was stillborn until they added crying sounds!) The baby girl is then rescued by a couple who already have another baby girl of their own.


Years later, the two babies have grown into attractive adult women desired by many men in the village. Kamfa (Naowarat Yuktanan) is the birth daughter and Boonmee (the gorgeous Pornpan Ketmamatsu) is the adopted daughter. While Kamfa is obedient, gentle, shy and a hard worker who accompanies the rest of her family to the fields, Boonmee is lazy, short-tempered and nasty to her parents, particularly her father, whom she hates. Traveling from Bangkok, a young police officer named Cha (Toon Hiransap) and older Professor Phalat (Sor Asanajinda) take an ox-drawn carriage to the village. The first thing they're greeted by upon arrival is a corpse lying in the brush, which causes their goofy driver (played by an overacting camera-mugger used as comic relief throughout the film) to jump teen feet into the air back onto his wagon. The three then go to a graveyard and find the caskets of the recently dead are filled with snakes instead of corpses. A consult with a shaman shows an evil spirit of a shape-shifting old sorceress who sometimes takes the form of a giant snake monster is responsible.

Though she has no problem leading on a local brute to do her bidding, Boonmee actually is more interested in winning over the affections of Cha. Unfortunately, he's more interested in her sweeter sister, which prompts Boonmee, who has been hosting the spirit of the sorceress since birth, to use her snake girl powers to get her way. She hypnotizes Kamfa and makes her sleepwalk to the village chief's house where his young daughter is recovering from a cobra bite. The sorceress then appears long enough to kill the girl. When the chief shows up only Kamfa is there so she's blamed for it. When the father attempts to intervene, Boonmee transforms into the old sorceress and kills him by biting his neck.

For punishment, Kamfa is set to be executed by the villagers. Cha and the Professor, who went to the city for a spell, arrive back just in time to see Kamfa tied to a stake about to be burned alive. When Cha tries to stop it, he gets into a fight with some villagers and finds himself tied up and about to be roasted. However, a Buddhist monk shows up just in time to pray and cause it to rain. The fire is extinguished, Kamfa and Cha are set free and Boonmee escapes and goes to live in a cave with the old sorceress, some cavemen and a bunch of scantily-clad snake girls who seduce and lure men into their lair so the sorceress can drink their blood. Why Boonmee wasn't just living with them to begin with is anyone's guess but this does at least give us a scene where the snake girls do a choreographed dance to an instrumental disco remix of Blue Monday that lasts almost five minutes. Yeeeeesssss!

Boonmee eventually puts Cha under her spell and takes him back to her cave while Kamfa, Cha, the professor, the goofy villager and Kamfa's mother (Namgneun Boonnak) set out to do something about it. A plastic skeleton, a wobbly, red-eyed giant snake and dynamite all figure in the sloppy and astonishingly poorly edited finale.


Also thrown into the mix are a sacred Buddhist necklace used to break the curse, a real fight between a cobra and a mongoose, the professor giving a snake girl a piggyback ride, a completely stolen soundtrack (music from Carrie and Conan the Barbarian is also used), a bunch of really bad jump cuts and footage from a parade taking place at the Songkran Festival (a national holiday to celebrate Thai's New Year in accordance to the Buddhist calendar), which gets several minutes of screen time. Though there's some fun stuff to be found here, and a great performance from the unknown older actress playing the sorceress, it pales in comparison to the other similar snake woman movies I've seen (try the Indonesian SNAKE QUEEN with Suzzanna instead) and is cheap, dumb, horribly edited and generally poorly made with awful "comedy" and some slow passages that will really try your patience. Still, far from the worst Thai horror I've seen from this same time period. Make of that what you will.

These snake woman movies based on folklore were, and continue to be, very popular in Asia. In Thailand alone there's Phantom Snake (1965) starring Petchara Chaowarat, Snake Queen (1972) starring Aranya Namwong, Nakee (1979), which became the basis for two Thai TV shows (in 1988 and 2016) and was followed by a 2018 sequel, Mae Bia (versions made in 1989, 1993, 2001 and 2018), Devil Medusa (1995), Deep in the Jungle (2008) and others. Even this one received its very own sequel in 1990; Queen of Ghost Snakes 2, starring Trirak Rakkarndee from the first couple HOUSE OF POP films. I was hoping to watch that one back-to-back with this original but couldn't find it anywhere.


This was never released in English and the only available print is really washed out and ugly with an improper aspect ratio (probably from a cheap VCD release), which didn't help with the enjoyment factor any. I'm not at all sure about the director(s) I have listed but the poster seems to list two. The first of these - สุริยน ดวงทองดี - is attached to numerous other Thai horrors like the vampire film แก้วขนเหล็ก (1983; "Immortal Enemy"), the ghost movie แม่นาคอาละวาด (1989; "Mae Nak Rampage") and the QOGS sequel.