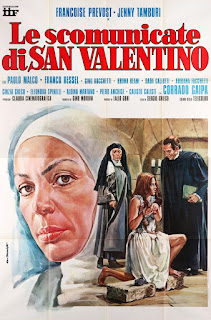 
Though not the first of its type, it was Ken Russell's notorious (and originally X-rated) The Devils (1971) that really kickstarted the nunsploitation cycle of mostly-European exploitation flicks. Soon after, we got a whole slew of films ready to put naive, uptight, virginal and / or repressed sisters of the cloth into criminal, sexual, blasphemous and / or horrific situations. It is no accident these were made during a time of growing sexual liberation and relaxation of film censorship as that was always at odds with the church and their attempts to dictate what was or wasn't acceptable content. With these particular movies, directors were able to provide audiences with cheap thrills while also criticizing the destructive / restrictive nature of the church itself and its proclivity for greed, hypocrisy and corruption. That in itself gives these, as lowbrow as some of them may be, a justification of sorts.


Falsely accused of both heresy and murdering a bishop, innocent Esteban Albornoz (Paolo Malco) is hunted down by soldiers working for the Inquisition. Though he manages to kill three of them during a swordfight and escape, he's seriously injured by a gunshot to the arm. Esteban and his lovely girlfriend, Lucita Fuentes (Jenny Tamburi), are stuck in a Romeo and Juliet-style situation. Despite coming from warring families who've hated each other for generations, the two have fallen in love. However, Lucita's family has gone to great lengths to keep the two apart. For starters, they've stuck her in a cloistered convent and are forcing her to take her vows as a nun in a week. Second, the "anonymous" report implicating Esteban in crimes punishable by death came from her awful father, Don Alonso (Franco Ressel), who wants Esteban out of the picture permanently.

With help from a San Valentino convent verger Joaquin (Gino Rocchetti), Esteban has been able to hide out there undetected in a hidden room. Lucita occasionally sneaks out to visit him or to bring him food, something her lesbian roommate Josefa (Bruno Beani) finds out about and uses to her advantage. Life inside the convent proves to be just as bad as life on the outside as far as religious hypocrisy and abuse of power is concerned. The four head nuns, led by Abbess Encarnación Díaz de Montalvo (Françoise Prévost), who's such a nice lady one character refers to her as "Satan Incarnate," regularly indulge in rather ungodly behavior. When Sister Rosario (Aldina Martano) accuses them of tying her to a bed and abusing her, they strip her topless and whip her bloody in front of the entire church. Things get even worse for our young heroine when someone kills Josefa and she's blamed for the murder.

In order to extract a confession, Lucita is stripped topless and tortured under the supervision of fanatical Father Onorio Mendoza (Corrado Gaipa), who only seems to get a joyful gleam in his eye whenever the prospect of killing a heretic arises. With her feet strapped to the ground, a hooded executioner yanks on a rope tied to her arms to stretch her out. When that fails and more tortures follows, most of the convent hierarchy and nuns-in-training throw her under the bus, her father fails to help and they start to pin the blame for the murder on Esteban, Lucita feels compelled to falsely confess. She's then branded a heretic and sentenced to death. Onorio plots to make an example of her by having a public execution in Seville in front of a large audience so that "The flames of the stake will revive the flames of our faith!"


With his love in Seville awaiting being burned alive, Esteban is forced to take extreme measures. When he's discovered by the Abbess, he briefly takes her as a lover hoping to take advantage of her power and potential sway in Lucita's upcoming trial. However, once her true nature as a black widow is revealed, he's forced to flee. He goes to visit his friend Marcelino, who hooks him up with weapons and a horse, and then it's off to visit Lucita's parents. Though they're not ready to set aside their family feud nor give their blessing of marriage, they do hook him up with Pablo (Attilio Dottesio) and some of their other guards in a last ditch effort to save their daughter.

Meanwhile, a bunch of male corpses are discovered buried on the convent grounds. The Grand Inquisitor then rounds up the nuns, whom he deems "foul creatures who are unworthy to live" and decides to punish them. Instead of a public execution, which would cause a scandal, he decides to take a page from the Edgar Allan Poe playbook by bricking them up inside. There, in scenes clearly inspired by the delirious climax of Russell's film, they start to go mad due to lack of food, water, oxygen and knowledge of their impending doom. Even though the church claims that Lucita has died from a sudden illness, Esteban doesn't buy it and believes they're actually hiding her somewhere. After her grave is exhumed and the corpse of an old witch is found instead, his suspicions are confirmed. But will he be able to get to her in time?

This movie is usually described as dull and not exploitative enough (despite tons of nudity!) but I found myself actually drawn into this sordid little melodrama. Though the interiors are barren and cheap-looking in a cost-efficient attempt to emulate the sparse and sterile convent in Russell's film and a few passages drag, I found this otherwise above average for this subgenre. The story (supposedly "loosely based" on a play by Victor Hugo) really isn't bad, there's a haunting and synth-heavy music score from the prolific but seldom celebrated Coriolano Gori, it's well-made and edited and there are several surprisingly strong performances in here, especially by Prévost and Gaipa. 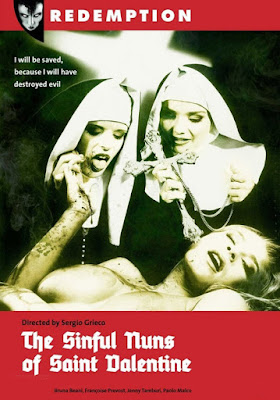 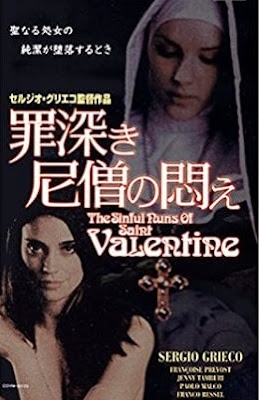 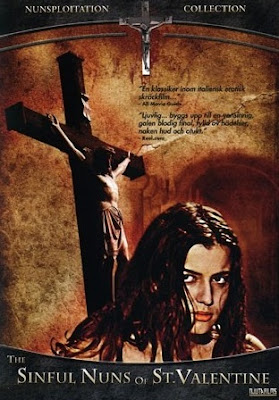 Also in the cast are Pier Giovanni Anchisi as Onorio's assistant Isidro, Calisto Calisti as the Grand Inquisitor and Dada Gallotti and Franca Scagnetti as nuns. This was another unseen-in-the-U.S. Euro exploitation flick given new life by a delayed VHS / DVD release from Redemption / Image Entertainment, who were the first to offer this with English subtitles in 1998. Redemption also offered this film on Blu-ray in 2013.