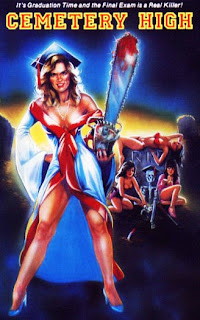 This is one of those films I'm almost embarrassed to admit I actually got some enjoyment out of. After being raped and/or assaulted, high school grads Kate (Debi Thibeault), Michelle (Lisa Schmidt), Dianne (Simone) and Kathy (Karen Nielsen) turn vigilante and aspire to wipe out all "scum-sucking assholes" in their town. Slobs, bikers, barflies, wannabe rapists, anyone who hits on them with a bad come-on line and, in one case, a guy who's just harmlessly walking down the street, are all immediately wasted. And other ladies in their hometown (and all across America!) prove to be quite impressionable, as they begin to do the same. Each time violence or nudity is shown, the warning gimmicks "gore gong" and "hooter honk" (a horn) are sounded. It's fun at first, but runs itself into the ground pretty quickly. The girls tell each other it's time to get naked, whine when they get blood on their shoes and fight over who gets to kill who. The mock documentary approach (also used in Bechard's PSYCHOS IN LOVE) where characters talk directly to the camera, is fun and used pretty well.
.
Yeah OK, so this is desperate, stupid, senseless filmmaking and the cheap comic gags are often irritating, but it did make me laugh out loud several times, which is more than I can say for the entire Adam Sandler oeuvre. I was quite shocked to see this get a DVD release, too, as I was quite sure this rare video would just gradually disappear into oblivion. The director's next was the sci-fi comedy GALACTIC GIGOLO, which featured much of the same cast. Carmine Capobianco (who starred in PSYCHOS IN LOVE) co-wrote the script with the director and has a cameo here. Also with Ruth Collins (as a late edition to the "Scumbusters" who provides some topless-ness) and Frank Stewart as a coroner.
.
The director claims that uncredited executive producer Charles Band butchered this film in post production (apparently it was originally to be called Assault of the Killer Bimbos - a title that was later used for an unrelated 1988 comedy), and claims the same fate befell his sci-fi comedy GALACTIC GIGOLO.

the appropriately sleazy ambiance works for it, and some of the stupid jokes hit. nobody seems to like CEMETERY HIGH all that much; even the director supposedly disowned it (my guess is that the "gore gong" and "hooter honk" gimmicks were added later). tough to overlook references to "faggot fuckheads" and whatnot, but i can't really hate a movie whose opening production company credit identifies it as "A GENERIC FILM".

found this in the march 1989 issue of CINEFANTASTIQUE (excuse any typos, etc):

"unlike decoteau, bechard had nothing good to say about his stint at band's company: 'i know what it's like to be raped. ... band gave me tons of wonderful promises ... and all these other lines of bullshit. being basically a fellow who wanted this very badly, i believed everything he said. ... when i gave them PSYCHOS IN LOVE, i had it in writing that they wouldn't change it at all. if i hadn't done that, they probably would have raped that film and it would have never been a film that i'm proud of. i am proud of PSYCHOS IN LOVE. but i think GALACTIC GIGOLO was sodomized by charlie band. we filmed it as a non-animated adult cartoon. that was my concept. we used the brightest colors ... in [color] timing this film [empire] took out all of the colors and left it really flat and ugly. their editing and pacing is nothing short of pathetic; they left out some wonderfully funny stuff, and they left in all of the shit. their motto is 'when in doubt, cut to a pair of tits.' i found out [the movie] was re-titled through a brochure from empire's urban classics; they never had the decency to tell me they were changing the name of my movie.'
bechard's next film ... TEENAGE SLASHER SLUTS, was presold by [empire] in foreign markets as ASSAULT OF THE KILLER BIMBOS. 'they found the word 'sluts' to be offensive ... and then they go and propose two other movies with the word 'sluts' in the title!' bechard laid the blame for empire's dissatisfaction with the final film to the manner in which band ran his company.
'charlie never read the script ... i had the script approved by david ross, who used to be in empire's development department, and debra dion who is now charlie's wife. i have a written letter from [ross] which says ' yeah, we like the script. just make a couple of little changes here and there.' basically we agreed it was good. afterwards, i started filming and almost two or three weeks after we wrapped, charlie calls me up and said he finally read the script. he said he didn't like it. i don't know how you run a company and allow someone to use your money to make a film without ever having read the script. that, to me, is not the way to do business. when it became HACK 'EM HIGH, i said ' wait a minute, there's no hacking and there's no high school.' of course, they came up with new scenes that we had to re-shoot that were along the lines of the usual empire quality.'
...though he was reimbursed for services rendered on GALACTIC GIGOLO and HACK 'EM HIGH, bechard claims he was short-changed on the proceeds from PSYCHOS IN LOVE. 'we were promised wonderful percentages of the gross, not of the net, on the film. i made sure they couldn't pull any accounting tricks. but ... they just never bothered reporting to us. we were supposed to be getting quarterly statements and checks. we never got anything. my letters to charlie, complaining about this situation, and the shabby treatment of my films, were ignored.'"

article continues with mention of an in progress documentary on the making of CEMETERY HIGH, by kathy milani who did BTS work on bechard's pictures. don't think that went anywhere.

"from the director
GormanBechard5 May 2009
I detest this film.

Long story short: it was originally called "Assault of the Killer Bimbos." It was a black comedy. We filmed it as written. Charlie Band, who ran Empire, called me the day after we wrapped and said he just read the script and it was too dark for his liking. He was taking away the title (because I had gotten such great publicity, including PEOPLE magazine), and keeping only half of what I shot. He was having his staff write some back story.

Thus my story about girl who offed scum bags just because they knew they could...now became a story about girls who were abused, etc and so on. But it was the film that was ultimately abused (and I'm using a nice word) by Band.

I talk about this at length on the commentary of the new PSYCHOS IN LOVE DVD release. (Of course, if I had seen what they did to Galactic Gigolo in post prior to filming this, I would have never made a second film for Band.)

And if you're a filmmaker, and an idiot with money tries to tell you what to do with your film...I don't care how badly you want it...WALK AWAY."

Completely understand why the director would be irate but I do think some funny moments remain in Cemetery High despite what Band did. Would be interesting to see this reassembled to the director's original vision but I doubt we'll ever see that happen and Band probably threw out the footage anyway. I haven't seen Galactic Gigolo.

me either. i don't have much time for features right now, so i watched all of bechard's modern shorts last week. at the turn of the century he was doing a series of "stills + narration" videos in flash. the best of these, OBJECTS IN THE MIRROR ARE FURTHER THAN THEY APPEAR (2003), was based in part on one of his novels. really makes me want to dig out the one i bought and never read!

I've been meaning to check out his film Disconnected but haven't gotten around to it yet. Looks like what Band did pissed him off so much he didn't do anything else for over a decade and has been making documentaries in recent years.

I just watched "Objects" on YouTube and liked it! It's well written and makes me want to check out his novels.

if it helps, i gave DISCONNECTED 3/5 stars, same as PSYCHOS IN LOVE (a more concrete up-to-date rating).

right?! the dust-jacket back-panel author bio for his debut, 1991's THE SECOND GREATEST STORY EVER TOLD, leads with this: "bechard is the independent filmmaker responsible for PSYCHOS IN LOVE, which he likes, and a bunch of other films, which he prefers to forget." ha!

i was most drawn to the grant hart (hüsker dü) doc. basically a low-budget one-on-one interview broken up by archive material. hart was an interesting, complex guy, but i don't know how it'd play to non-fans. gifted out his animal welfare doc (A DOG NAMED GUCCI) this year, so i'll get to see that at some point, too.