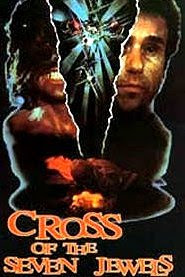 ...aka: Cross of the Seven Jewels
...aka: Talisman
Directed by:
Marco Antonio Andolfi
So bad... I don't even know where to begin. What an overly-complicated mess! Undoubtedly one of the worst werewolf films of all time. It may also be one of the worst romances, one of the worst crime flicks, one of the worst action movies and one of the worst occult thrillers ever created. Why? Because it tries to be all these things at once and fails miserably at all of them! Director Mario Antonio Andolfi, who also edited the picture and did the "special" effects, takes on more jobs than he should have since he obviously has little talent in any of the above areas. He also decided it was a good idea to cast himself (using the name "Eddy Endolf") in the lead role. In addition, he also provided the screenplay, so it's no surprise that the females in the cast keep fawning over how "good looking" and "cute" he is. One of the ladies even says "I've always dreamed of meeting a man like you." A-hem. Now Andolfi really isn't a terrible looking guy and he obviously likes to keep in shape, but it's hard to watch a film as lame and cheap as this one without rolling your eyes over how ridiculously narcissistic the whole thing is. As has been pointed out elsewhere, it's basically a silly vanity production and one of those movies that was conceived by someone wanting to showcase how multi-talented and appealing they assume they are. When these things don't work out, there's a certain smugness to them that's pretty irritating. Technical incompetence and horn tooting aside, what really turns this movie into a headache-inducing bore is how overly-complicated, unfocused and talky it is.

The film opens with Gordon Mitchell presiding over a red-lit black mass ceremony where he keeps chanting about Aborin while people in silly S&M attire and black harnesses roll around on the floor, a topless woman is whipped and some fat old guy in a thong keeps rubbing up against a woman. Meanwhile, successful banker Marco Sartori (guess who?) has just arrived at a train station in Naples on an invite from his cousin Carmella, who he's never met. As she starts showing him around the city, Mitchell's character appears on a beach where a heroin deal is taking place. He gets those junkies to steal Marco's precious silver cross necklace with multi-colored jewels. Marco flips out. He needs to get back the necklace because it prevents him from transforming into a werewolf. Marco discovers that the woman who claimed to be his cousin actually was an impostor who set him up. He follows clues back to a nightclub. There he meets a prostitute/drug dealer named Maria (HOUSE ON THE EDGE OF THE PARK's Annie Belle), who became trapped in a life of crime after her parents were killed but now wants out. Marco ends up tied to a chair where a bunch of thugs rough him up because they want him to give him the names of all his millionaire customers. After escaping that situation, Marco ends up confronting a black market dealer, whose head ends up melting after he's pushed against a wall (?) Marco and Maria naturally fall in love, and she accompanies him around to different Italian cities in his frantic search for the necklace. On occasion, the beast comes out and he has no control over his actions. And what a beast it is! More of that to come...

The plot line gets insanely overstuffed before long. Marco ends up smack in the middle of this huge Italian crime ring that specializes in drug trafficking and various other crimes. There's talk of Camorra bosses, Moroccon coke connections, political corruption, truth serums, terrorism and all kinds of other stuff that isn't the least bit interesting. Even more time is wasted with a clichéd, boring police investigation that serves no purpose whatsoever. And if that's not enough, there's a long nightmare sequence that shows repeat footage of stuff we've already seen cut in with flash-forwards of stuff we haven't seen yet but are about to. One scene is a flashback to how Marco acquired the necklace as a toddler. Apparently, his mother gave it to him before a Chewbacca-look ape monster made her stomach explode before disappearing into thin air (!?) The same oversexed demon ape creature thing also makes an appearance at Mitchell's Satanic hoe-down, where it has sex with a topless blonde cultist. By the way, all of these black mass scenes seem completely disconnected from the rest of the film and have no relevance to the rest of the story. None of the characters appear together on screen at any time. It's as if they were tacked on a later date solely to provide additional nudity.

Ultimately, Marco learns that his necklace has fallen into the hands of medium and occult science expert Madame Amnesia. And when he shows up to get it, she starts her psychic session dressed in lingerie. This leads to a gratuitous rape sequence. Yep, werewolf psychic rape complete with foamy drool. Not as good as it sounds folks. And I haven't even mentioned that this has what could easily be the worst werewolf "costume" ever created. It consists of long hair that covers the top part of the head only, some furry gloves and a small codpiece so Marco doesn't show his junk. Otherwise, he basically runs around bare-assed clawing, biting and throwing people around. Again, not nearly as good as it sounds. The transformation scenes use time lapse photography. The dubbed dialogue is awkward as hell. When's the last time someone woke you up by saying, "End of sleeping period." And when's the last time a growling crime ring leader gritted his teeth to call you a "damned little fat head!" Fans of horrible, cheap, trashy, inept movies may like this one but I actually found it pretty boring overall.
★
Posted by The Bloody Pit of Horror at 10:03 AM