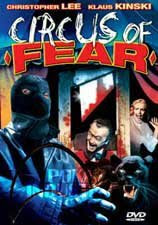 ...aka: Circus of Terror
...aka: Psycho-Circus
...aka: Rätsel des silbernen Dreieck, Das
...aka: Scotland Yard auf heißer Spur
Directed by:
John Llewellyn Moxey
If you can make it past the shaky, badly edited opening sequence featuring a slew of criminals robbing an armored truck of a quarter of a million pounds and then escaping in a speedboat, then you may enjoy the rest of this Edgar Wallace adaptation (it does pick up soon after). Cranky Sir John (Cecil Parker) sends police Inspector Elliot (Leo Genn) undercover as a professional photographer to investigate a string of murders at "Barberini's Circus." Among the suspects are Christopher Lee as Gregor the Great, a hooded lion tamer who never shows his face, Suzy Kendall as his faithful assistant, Anthony Newlands as the cigar-chomping owner, Heinz Drache as the ringmaster, Maurice Kaufman as a bad-tempered knife-thrower with an unfaithful girlfriend (played by Margaret Lee), Skip Martin as a sneaky, blackmailing dwarf, Eddi Arent (once again used as comic relief) as the prank-playing book keeper and many more. Klaus Kinski (one of the robbers from the opening sequence) also shows up acting weird and 'looking for work' (actually the loot that was stolen at the beginning). Victims end up with knives in their backs, some find the missing money and hide it and there are enough assorted secret agendas, double crosses, back-stabbings, blackmailing, jealousies and rampant criminal activity to keep this interesting enough. It was filmed at Bray Studios in England and features a pretty good blues score from Johnny Douglas.
.
A terrible print of the film became a fixture on all those cheap, public domain DVD multi-packs (distributed by companies like Alpha and Brentwood), but Blue Underground eventually released a better quality copy of the film. It was also part of the four film box set "The Christopher Lee Collection."
Score: 5 out of 10
Posted by The Bloody Pit of Horror at 10:28 AM