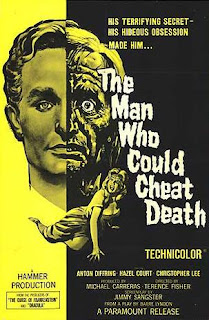 Directed by:
Terence Fisher
Dr. Georges Bonnet (Anton Diffring), a talented sculptor and brilliant surgeon, seems awfully well-educated and worldly for someone in their mid 30s. That's because he's not actually in his mid 30s... he just looks it. Actually, Georges is 104 years old. Seventy years earlier, he and his now-elderly colleague, Prof. Ludwig Weiss (Arnold Marle), came up with a way to prolong life and youth with glandular transplants that must be administered every ten years. While Ludwig decided to simply let age run its course, Georges allowed himself to be the guinea pig. He's even concocted a special serum that can temporarily keep him alive while he waits for a new transplant. If he doesn't get the new gland, his face turns yellow, seventy years worth pain and agony flood him all at once... and someone else usually ends up dying. Every ten years, Georges relocates to a new city to begin a new chapter in his life, but the lonliness associated with living forever is finally starting to catch up to him.
Now in Paris, Georges is reunited with Janine Dubois (Hazel Court), a beautiful young woman he'd met and fell in love with years earlier but abandoned before things could get too serious. Janine has moved on with her life and is now casually dating Dr. Pierre Gerard (a very serious Christopher Lee), but finds old feelings resurfacing once again now that Georges is back in the picture. Problems arise when Ludwig shows up for their annual operation and, having suffered a crippling stroke, is unable to perform the necessary surgery. Ludwig, as well as Police Inspector LeGris (Francis De Wolff) are also curious about a string of missing models left in Georges wake, including his most recent lover, Margo (Delphi Lawrence).
It's a pretty predictable story (scripted by Jimmy Sangster and based on a Barre Lyndon play that was already filmed in 1945 as THE MAN IN HALF MOON STREET), but as per Hammer Studio's usual, the whole thing looks great. Mostly set indoors, the turn-of-the-century Paris setting is fairly well established through art direction and costumes (certainly not the British and thick German accents). It's also very colorfully photographed (by Jack Asher) and nicely scored (by Richard Bennett), but it's really the solid cast that keeps the whole thing on track since this is very much a dialogue-driven film. Diffring (who'd previously acted in the failed TV pilot TALES OF FRANKENSTEIN for Hammer) does a great job as the conflicted, ageless doctor who ultimately only has his best own interests in mind. His fear of death is so consuming that it's maddening, and he doesn't care who is taken out in the process. Marle gives a wonderful supporting performances and Court is a warm and appealing heroine. Lee, on the other hand, is so uptight and stuffy in his atypical hero role that he's completely overshadowed by the other three stars. Michael Ripper also has a typically tiny role as a morgue attendant.
.
A "European version" of the film was released overseas that featured a brief topless scene with Court, which may be the first instance of mainstream nudity filmed in the UK. Neither the video or DVD release (from Legend Films) contain the nude shot.
★★1/2
Posted by The Bloody Pit of Horror at 2:11 AM No comments: