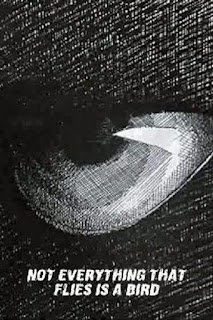 ... aka: A Bird Isn't All That Flies
... aka: It Is Not a Bird All Which is Flying
... aka: Not Everything That Flies Is a Bird
Directed by:
Borislav Šajtinac
In an land that's vaguely apocalyptic or at least post-war; a flat, dusty, barren wasteland with bones scattered about and trash blowing across the terrain like tumbleweed, an old man lives in a tiny, hastily and sloppily constructed wooden home. While it may be barely holding together, it's at least his and he has plans to fix it up. After his window falls off when he tries to open it, he retrieves some bricks and starts patching up the roof. As he's in the middle of improving his dwelling, a giant black monster bird decides to perch right on top of it; slowly crushing the home with its weight. The man tosses a rock at it, but the bird catches it in its mouth, swallows it and doesn't budge. An attempt to run it off with a scarecrow fails when it merely eats the scarecrow. Time to bring in the big guns. He returns with a small tank that shoots arrows, but the bird just eats it and then defecates him out. Reduced to groveling at the bird's talons, the man tries to wait it out into the night. Still, it refuses to leave, even when a thunderstorm erupts. The defeated man crawls back inside what's left of his home to try to wait it all out but when he emerges the next day the bird is still there ready to devour his remaining belongings and finish completely demolishing the home. 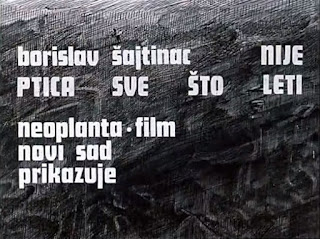 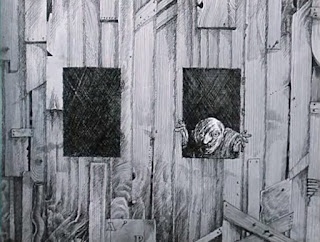 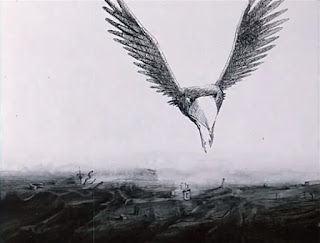 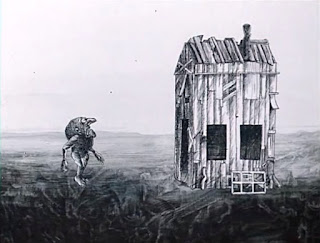 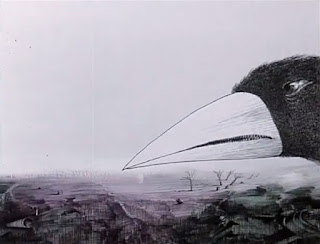 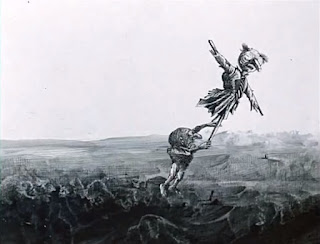 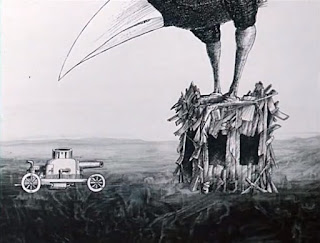 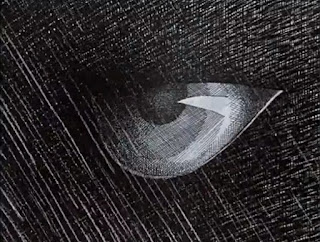 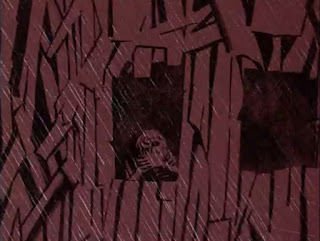 This 7-minute Yugoslavian animated short is described as "a parable of the 1968 Soviet invasion of Czechoslovakia." While the message isn't exactly subtle (not that entrenching it in harder-to-decipher metaphor would have made it any deeper per se), this does spice things with up a brief surreal interlude featuring the bird hovering over the masses before entering a nude woman between the legs and then transforming her into a bird ("One of us! One of us") plus an amusingly cynical ending in the vein of "if you can't beat 'em, join 'em", though the "join 'em" aspect is eventually accomplished via persistence, robbery and coercion! There's a distinct style to the animation, too, that I quite liked. Everything is meticulously sketched with thousands of little black ink lines and color is muted and only sparingly used. 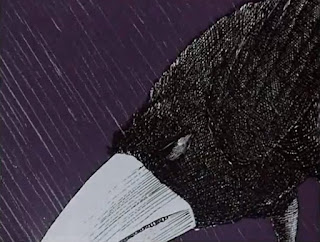 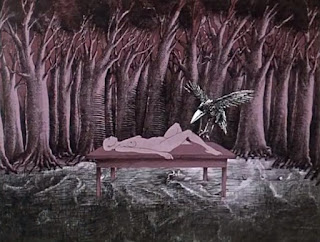 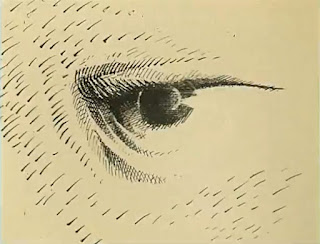 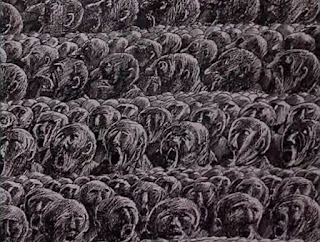 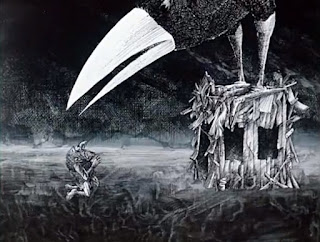 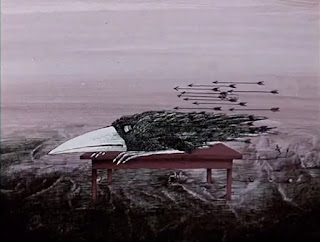 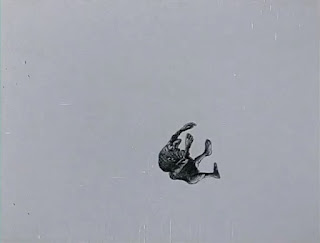 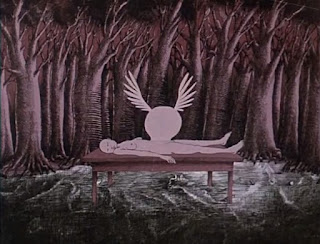 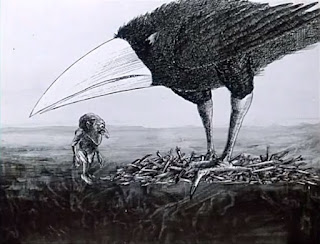 Šajtinac was far more prolific as a painter, illustrator and drawer than as a filmmaker and would eventually relocate to, and work in, France. There have been many exhibitions of his work around the world and he's published a number of books over the years. He did manage to win the grand prize at the Annecy International Animated Film Festival the following year for another animated short he did called Nevesta / "The Bride" (1971).
This is given the extremely awkward English language title It Is Not a Bird All Which is Flying in the opening credits but is more widely known as Not Everything That Flies Is a Bird. Šajtinac eventually combined this with some of his other animated shorts and filmed new linking segments for the feature-length release Nicht alles was fliegt, ist ein Vogel (1978), which is also given the English title Not Everything That Flies Is a Bird. This is available to view on Youtube (there's no dialogue so need for subtitles) and is included on the DVD compilation Srpski animirani film 2 / "Serbian Animated Film 2," which was put out by The Belgrade Documentary and Short Film Festival.
★★1/2
Posted by The Bloody Pit of Horror at 9:39 PM No comments: