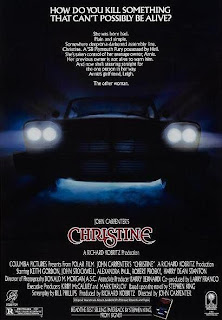 
Christine is bad to the bone. You could also say she was born to be bad... right off the assembly line. Christine is a 1958 red Plymouth Fury and she's unlike any other car out there. Before even being completed, she crushed a mechanic's hand with her hood and then suffocated another for dropping cigar ash in her backseat. Twenty years of wear and tear later, 17-year-old high school nerd Arnold Cunningham (Keith Gordon) spots her rusting away by an old man's house. She's for sale and, being strangely drawn to the car (and needing one anyway), he buys her for 250 bucks off of gruff George LeBay (Roberts Blossom), who explains that the car belonged to his late brother, who passed away six weeks earlier. It won't be until well after the purchase that we learn the car's former owner was found dead inside of Christine... but not before the same man's young daughter and wife fell victim; all of carbon monoxide poisoning. A real fixer-upper, Christine needs a LOT of work. Arnie takes her to a "do it yourself" wreckage yard owned by foul-mouthed Will Darnell (Robert Prosky), who agrees to let Arnie keep the car there in his garage and have access to tools and a junkyard full of parts if he'll agree to help out around the place.

Arnie immediately gets to work on restoring it. As Christine is changed for the better, the same cannot be said of Arnie, who becomes antisocial, defiant, irritable and obsessed with the car to the point where he spends almost all of his time at the garage tending to his new ride. At school, Arnie is the target of bullies and has never had a girlfriend. At home, his parents aren't much better. Mom (Christine Belford) is a smothering control freak who doesn't even want him to have a car and refuses to let him park it in front of their house, while dad is a total pushover. Arnie does have one ally at least; his best buddy Dennis (John Stockwell), who's always there to lend an ear, defend him and help him deal with his unreasonable parents. After losing his glasses and adopting a more devil-may-care demeanor, Arnie also lucks out in snagging Leigh (Alexandra Paul), the new girl in school; an appealing mix of beauty and brains all the guys at his school want. Arnie's devotion to his car threatens it all. He begins snapping back at his parents, almost completely writes Dennis out of his life and spends more with his car than he does his new girlfriend.

After getting locked in the car while choking, with the radio and lights coming on all by themselves, Leigh starts believing the car is possessed and seems almost jealous of her. She gives Arnie an ultimatum: it's either her or the car. He chooses the car. Some of the guys who have been giving Arnie a hard time in school sneak into the garage and take baseball bats to Christine, but she manages to repair all of the damage on her own, then sets out on the streets to get her revenge. One guy is cornered and smashed against the side of a building until he splits into two. Christine splatters another against the side of a car, blows one up inside a gas station and then just runs over the ringleader (William Ostrander), all while engulfed in flames and playing vintage classic 50s rock tunes. It's unclear at first whether Arnie's actually driving the car during all these murders since the windshield is blacked out, but Mr. Darnell answers that question for us before getting crushed between the seat and the the steering column. Police detective Rudolph Junkins (a wasted Harry Dean Stanton) shows up to investigate but is unable to really pin the crimes on Arnie. Dennis and Leigh eventually decide to team up, with a little help from a bulldozer, against the evil car.

I've never really understood the obsessive love affair some people have with their cars, but to many cars represent much more than just a way to get from here to there. They can also represent power, wealth, social stature, aggression, masculinity/femininity or even virility, and be as much of a reflection of someone's personality as how they dress, what kind of music they listen to or what kinds of movies they enjoy watching. Christine - perhaps subconsciously - seems to channel some of these ideas throughout, particularly how cars are sometimes viewed as an important right of passage into adulthood for teenage boys and how the quest for status symbols can change or even corrupt us. The Arnie character starts out as a self-deprecating wimp with no self-esteem. The only way he's able to build his confidence up, which gives him the courage to take on his bullies and pursue the girl of his dreams, is through the car. He is nothing without the car; a slave to the car. And the car ends up turning him against the few people who really care about him in the end.

Some interesting parallels aside, of the three big Stephen King adaptations released in 1983 (the other two are CUJO and THE DEAD ZONE), this is easily the least effective though all three were moderately successful at the box office. Much had to be trimmed out, but the film still needlessly runs almost two hours and takes forever to rev up. No explanation is ever given behind why the car is haunted or cursed, or how it is able to possess or control its human owner (unless we're speaking strictly in metaphors), though the book did delve into these things. Most of the side characters are nasty, vulgar and grating for no real reason when they could have been enjoyably eccentric and quirky instead. The script also fails to muster up much sympathy for the Arnie character, who goes from a semi-relatable geek to completely unlikable and obnoxious rather abruptly after the first 20 or so minutes. Christine is not exactly a lemon, but it certainly could have been much better.

Kelly Preston aka John Travolta's beard has an early, though insignifcant role. Columbia distributed it on both VHS and DVD, plus it continues to enjoy frequent TV airings to this day (perhaps because there's no sex or gore and thus little needs to be edited out). King was such a big name at the time that Christine the film was actually in production before Christine the novel even hit stores.