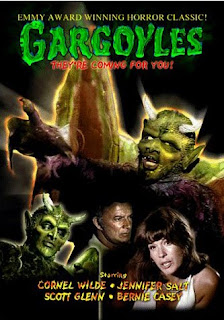 Directed by:
B.W.L. Norton
Author, university professor and anthropologist Dr. Mercer Boley (Cornel Wilde), who specializes in demonology and the occult, and his daughter Diana (Jennifer Salt), take a station wagon trip across the desert. During a stop at Uncle Willie's Desert Museum in "Devil's Crossing," they learn from Uncle Willie himself (Woody Chambliss) about an Indian legend and then shows them a horned, winged inhuman-looking skeleton that he's found nearby. Dr. Boley is skeptical at first, but after something (or more specifically, some things) start attacking Willie's shed and punctures the roof with its claws, his doubt quickly vanishes. Willie is knocked out, burns up in a fire and Mercer and Diana flee with a skull of one of the creatures to an out-of-the-way hotel run by drunken, lonely old Mrs. Parks (Grayson Hall, who'd just wrapped her final season of the vampire soap Dark Shadows a year earlier). After unsuccessfully trying to warn the police, the gargoyles flip a car over, get their claws on Diana and retreat to their cave dwelling, while Dr. Boley tries to organize a posse to help locate her. Eventually everyone discovers that the evil creatures have been patiently waiting for 500 years for their opportunity to claim possession of the Earth.
This is one of several '70s tele-films that's semi-famous for scaring the bejesus out of countless children when it first debuted on ABC TV. So how well has does it hold up after all these years and for those of us who aren't looking at it through nostalgic rose-tinted glasses? Actually, not too bad. I enjoyed it for the most part. It moves along briskly, is well made and entertaining. The Emmy-winning lizard-like gargoyle designs and makeup (contributed by Del Armstrong, Ellis Burman and Stan Winston) are still wonderful creations. I must admit that I preferred the first half of the movie when things were a bit more obscured. Toward the end more fantasy-oriented things begin... Such as a couple of the gargoyles that start talking... In English... With bizarre, electronically-altered voices. I guess that was necessary to give them their motive, but it sucks the creep factor right out of the film. I could ask other questions, such as "Why would a winged monster need to ride a horse?" or "Why are the gargoyle eggs (yes, "gargoyle eggs") three times the size of a grown gargoyle?" but I guess it's not really all that important.
The cast includes Bernie Casey (who's excellent) as the lead gargoyle and a young Scott Glenn as a motorcyclist. Richard Moll is supposedly in there somewhere too but I don't recall seeing him. Perhaps, he plays one of the monsters? Unlike many other TV movies from its era, this title is very easy to find. There were several video releases, a laserdisc release and a 2000 DVD release from VCI Home Video (an excellent quality print).
★★1/2
Posted by The Bloody Pit of Horror at 10:53 PM 2 comments: