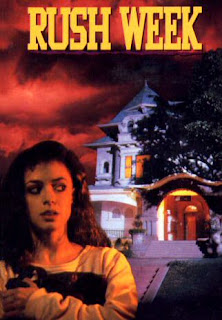 Raunchy comedies set on college campuses were very popular in the 80s (and still are). So were slasher movies (ditto). RUSH WEEK combines the two and the results are, surprisingly enough, not too bad. Ambitious journalism major Toni Daniels (Pamela Ludwig), a new transfer to Tambers College, immediately joins the school paper and is given her first assignment; covering Rush Week activities. Toni's actually more interested in stories with some meat to them, such as what happened to Julie Ann McGuffin (Kathleen Kinmont), a law student just reported missing by a concerned roommate. While covering her assigned story, Toni bumps into hunky b.m.o.c. Jeffrey Jacobs (Dean Hamilton), begins seeing him and finds out his former girlfriend, who was also the daughter of school dean Russel Grail (Roy Thinnes), was viciously murdered the previous year. All of the new victims (killed by a cloaked, masked figure brandishing a medieval axe) have been secretly posing nude for fat, bald, bearded cafeteria worker Arnold Krangen (John Donovan), who pays the ladies off with marked hundred dollar bills.
Unlike many of its slasherkin, there's something of a plot here and, while a bit routine at times, the storyline, plot twists and roster of multiple suspects are handled with competence by both the director and writers. Ludwig gives an appealing performance, which is pretty important to the film's success since it revolves mostly around her character. The fact she also enlists the aid of fellow college chums in medical and computer studies was also a clever touch. However, I doubt someone as bright as she appears to be would put herself in the situation she does at the finale. Production values are mostly fine and a good number of the supporting actresses provide the requisite T&A. One thing that's noticably missing is gore, and that's not going to set too well with some viewers. In fact, you have to wait over an hour to get any blood at all (the first three kills are all off-screen). Even then, there's just a quickie axe-to-the-chest and a decapitation.
As with nearly every post-ANIMAL HOUSE film set on a college campus, the humor is pretty crude (parties! mooning! grave robbing!) and a decent amount of time is dedicated to showcasing it. Jeffrey's frat house, where all the cool, fun-loving guys hang, is in some kind of rivalry with another frat house full of stuffy, rich, uptight preps. During one scene, Jeff and a few of his brothers crash a classy reception at their snobby rivals' home and substitute a gay cowboy porno for their initiation video. Other comic gems involve sneaking an actual human finger into a guy's french fries (guess someone just saw THE HITCHER) and tricking a prostitute into screwing a corpse! Rush Week at this particular school also culminates in an annual "fright night" costume party. They even get The Dickies to show up and perform two songs. Their entertaining show involves the lead singer popping out of a coffin dressed like a vampire and the lead guitarist wielding a hilariously huge chainsaw-guitar.
.
Gregg Allman of all people shows up as Toni's student advisor/boss. He's a hippie named Cosmo and one of his two briefs scenes has him meditating in a room with a topless woman. Arthur Roberts (who plays the alien guy in the 1988 remake of NOT OF THIS EARTH) makes an even briefer (uncredited) appearance as a future college student's father. The cast also includes Todd Eric Andrews (star of ZAPPED AGAIN!, another campus comedy), Laura Burkett (the girl featured in the BLOOD BEACH ad art) and Dominick Brascia (director of EVIL LAUGH and others).
★★1/2
Posted by The Bloody Pit of Horror at 7:54 PM 4 comments: 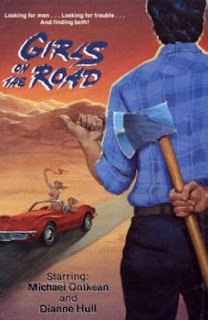 Directed by:
Thomas J. Schmidt
Self-proclaimed "wallflowers" Karen Moore (Dianne Hull), bespeckled class valedictorian, and Debbie Rae (Kathleen Cody), blonde cheerleader, plan a week-long trip to Big Sur for their graduation and to get away from their overly-strict parents. Before they arrive at their destination, the little hellraisers break about every single traffic violation in the course of about two minutes, cause a traffic accident by slamming on their brakes, cause a second accident by flashing a guy, drive around flipping everyone the bird and get pulled over by the cops for "littering" (i.e. throwing one of their bras out the window). They discuss losing their virginity, argue a little and giggle a lot. Just missing out on a news broadcast about a psycho strangler on the loose, they also decide it would be a swell idea to start picking up hitchhikers. Well, except for ones who are ugly ("Ugh, who'd pick them up?") or gay ("That's all we need... a couple of fags!"). I guess some could view this as being typical teenage behavior, but it didn't exactly make me not want to see them cross paths with the serial killer. Which, of course, is exactly what happens.
.
The misadventure of the carefree girls are cut with the story of Will (Michael Ontkean), a young soldier just back from 'Nam who's naturally pretty fucked up. Blue-tinted flashbacks show his therapy sessions, where he's basically brushed off by his uncaring shrink (Michael Kopsche). Will gets into a bar brawl, smashes a bottle over a guy's head and kicks another in the crotch right before hitting the highway to hitch a ride. Guess who pulls over to give him a lift? Why Karen and Debbie, of course! Will's on his way to "The Institution;" a free love hippie commune where he thinks guru John (Ralph Waite, the patriarch of The Waltons) can help him. Karen ends up falling for troubled hottie Will, while Debbie becomes intrigued by older man John, but both are apprehensive about giving up their virtue to either of those sketchy cats. Not even up for consideration is a weird-o hippie named "The Maker" (John McMurty), who carries around a dove, stares intensely at the girls, likes to wear glittery face paint and reminded me of Buffalo Bill from THE SILENCE OF THE LAMBS.
.
Primarily a coming-of-age tale where our naive heroines must quickly grow up after being forced into various unpleasant, bizarre and/or sexual situations, it also certainly has a place in the horror genre (and was promoted as such on video), with the serial killer aspect, a stragulation, various mentally-disturbed characters and a killer who - once finally revealed - goes completely nutzoid and attacks with an axe. The acting isn't bad, but there's a God awful AM radio tune ("Fantasy in Love") that plays repeatedly and the film doesn't appear to have actually been finished, concluding with a highly unsatisfying freeze frame right when things start getting good.
.
The cast includes Pamela Serpe (wife of actor Greg Evigan) as a hippie seductress, Cliff Emmich as a truck driver, stuntman-turned-director Charlie Picerni and 70's skin flick queen Uschi Digard, who can be seen for about five seconds sitting on the beach. There's no DVD to my knowledge, just an ancient VHS released by Unicorn Video.
.
★★
Posted by The Bloody Pit of Horror at 6:10 AM No comments: