The goal here is simple: To make comprehensive lists of every single horror film made between 1950 and 1990. I'm going to try to hunt down and review as many of these as I can. Just click on one of the letters below to start browsing. Reviewed titles will be linked and I do a rough color coding of country by region, which is explained on each page. As always, if you happen to see something missing from these lists that's made in the time frame covered, please let me know and I'll add it. Beneath these indexes is a little more about which titles - granted there are multiple ones - I prioritize, as well as how I go about anglicizing films with no official English title.


Because we're dealing with thousands of foreign language movies here, this proves to be rather tricky when it comes to indexing. For these I'm using the most commonly-known English language release title first and foremost. This may be the first English title it was given or perhaps a later one, as long as most people will know it by that title. If there are two common English titles, I basically just pick the one I happen to like the best. In some instances, the best-known title here in America IS the foreign-language title (i.e. Kwaidan, Santa sangre). In those cases I use the original title as the primary one instead of the English translations ("Ghost Story," "Holy Blood").


In cases where there is no official English release title because it's never been officially released with one, here's what happens and in the order in which it occurs...


1. Sometimes a small English title appears on the poster even if the movie itself was never officially released by that title and never made available in an English language version. Other times, there's an English translation under the film's original title right on the actual title screen. This is a fairly common practice in Asian markets and also sometimes occurs with European releases. 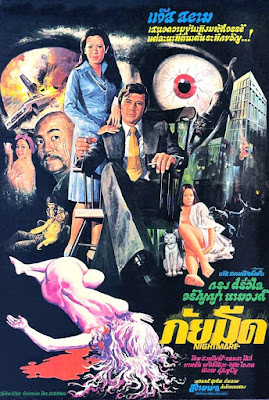 The Thai film ภัยมืด (1976) was never released in English or with an official English title. But, as you can see on the poster, right under the original title in small writing, is the title "Nightmare." Even though I'm not sure WHY they bothered putting it there as Thai films hardly ever left their country, it makes my job a lot easier! 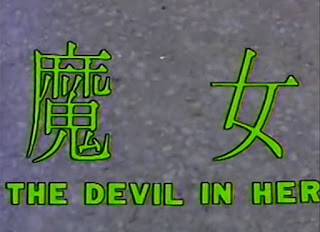 I could do my own translation of the Hong Kong Exorcist wannabe 女魔 (1974), which translates to Nu mo, or "Female Devil." But seeing how they were kind enough to include one right on the title screen, I don't have to. But then they pissed me off by NOT including English subs with the rest of it, but that's another story for another day.


If there's no English title on the title screen or any of the advertising materials then...


3. I translate the foreign-language title myself using a translator. I then compare that to an outline of the film's plot to make sure it fits. If so, great. Good enough for me. However...


4. In cases where the foreign translation makes no sense (it happens more than you'd think, especially with Asian films!), I'm just going to stick with the original title in the original language unless I find a more accurate translation to use.

However, we won't run into this problem a whole lot. In most cases, there's either an official or unofficial English title. The biggest problems I've run across thus far is dealing with Thai titles. I'm basically at the point where I'm about to advertise for a multi-lingual Thai friend to help me translate some of these damn things.

Posted by The Bloody Pit of Horror at 1:45 AM

> Hong Kong Exorcist wannabe ... NOT including English subs with the rest of it

oh, they translate the dialogue as long as they're doing the credits, then cut and run when the movie actually starts. i've seen that.

just wanted to say, i really like the new look around here. missing the A-Z on the side, but i'll get used to it!

To make matters worse the first few lines of dialogue also had subtitles then they went away entirely! No clue what happened there but I turned it off. Was hoping to watch it soon after "The Devil Strikes" since they tie in together but I think I'll search for an English version first, granted one even exists.

And thanks! Still have a ways to go. Right now I'm trying to get some of those country lists done but it's taking an eternity. I've been working on the Italian and Hong Kong ones for a few months now. I was hoping I could get the A-Z on the sidebar by letter without using uber small text but it's not looking possible. The only way around it would be to add 27 separate buttons!


I dug up the forgotten 'Wide World of Mystery' movies, they could be added as well.
I have a series overview here: https://letterboxd.com/campnightmare/list/abcs-wide-world-of-mystery-complete-episode/detail/

Some hadn't been mentioned since the 70s and about 40 are currently lost! If you or a colleague ever do an entry on the series I'd be happy to fill you in on what I know about it (the info isn't out there other than scattered places I've posted). I've been trying to get the word out as some of the lost movies may survive on home recordings. At the rate VHS tapes are tossed out by the public there isn't much time, assuming it's not already too late.

Just checked it out and great job on the list! Lots of really good info / research there. I'm going to add the titles that seem to be horror (per the plot synopsis) to the indexes here and add notes about availability. Once I finish my TV Movie index (which I'm currently working on along with about 20 others!) I will also link your list to that so people can be redirected there.

I've only seen 6% of the entire list so far, not surprising considering many are unavailable. I did grab copies of Clifford Swimmer and Alien Lover off Youtube to watch eventually.

yep. great work on that list. i'm at 13%. think i bookmarked it after taking in a bunch of the lesser-known SOV DCP mysteries earlier this year. been looking to start another anthology series and brian clemens' THRILLER sounds good about now.

Any chance of adding a page for movies that start with numbers? Like 976-Evil for example.

I probably should! For right now I have just alphabetized them by spelling out the # title if need be (some already are!).

Are you including unknown/unidentified stuff like Inhuman (1984), The Female Beast (1975), Slaughter House (1984), etc.? Don't know if they're original productions or retitle jobs, just that they exist(ed).

Only ones whose existence can be verified through a poster, advertisement, newspaper article about the production having been completed, etc. There are a lot of hoax titles people float around online (many are currently still on IMDb) so I try my best to leave those off of her so I don't spread around misinformation.