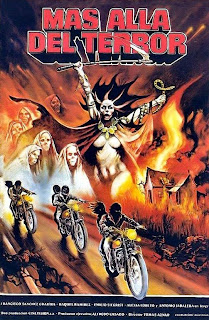 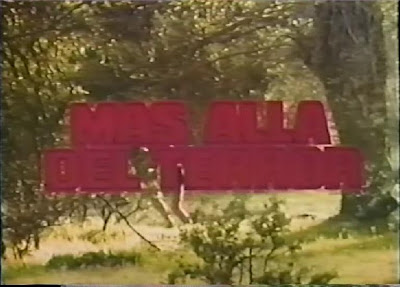 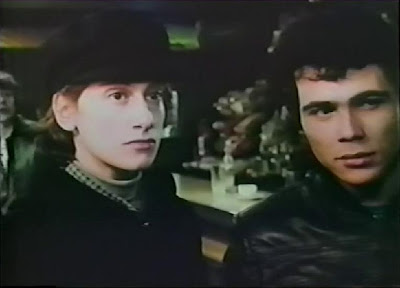 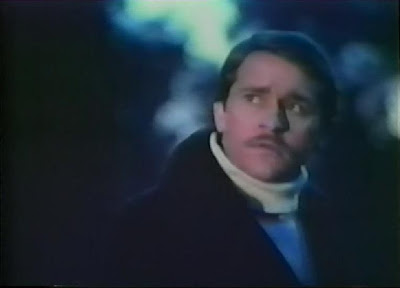 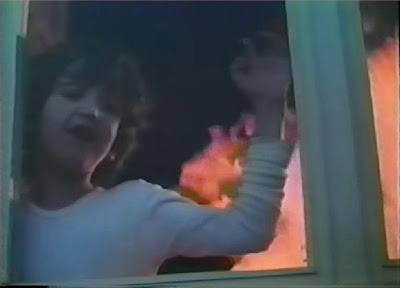 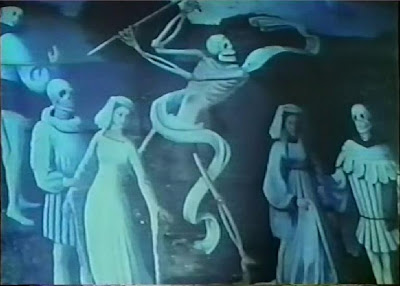 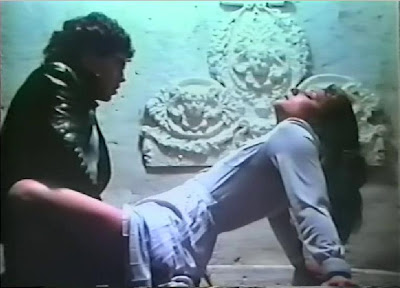 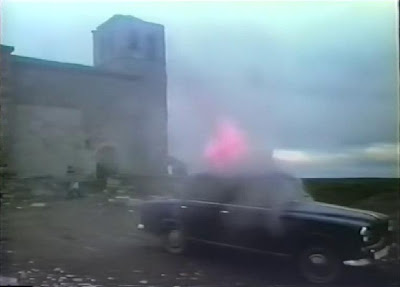 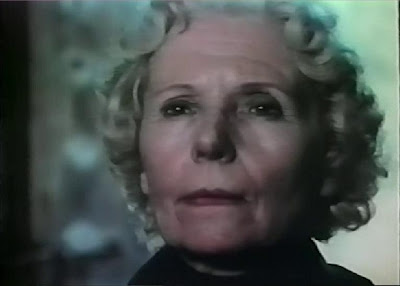 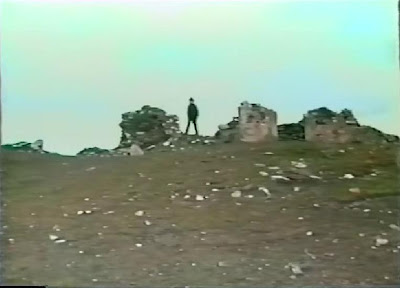 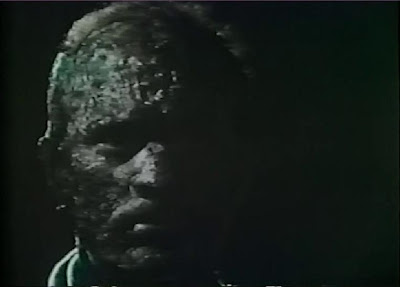 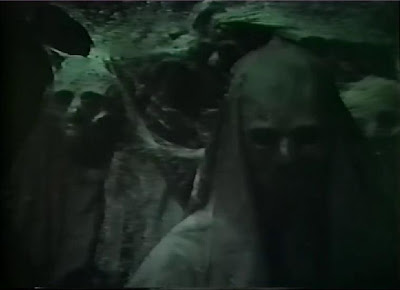 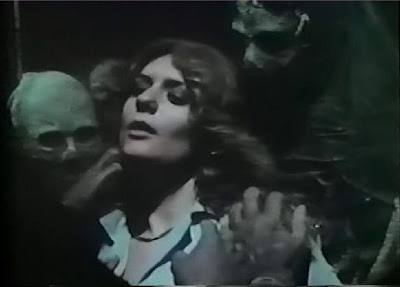 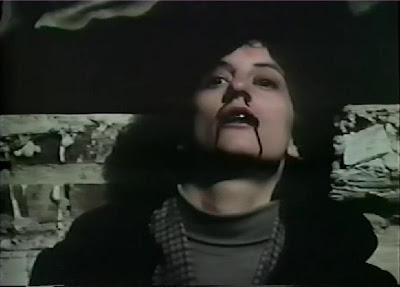 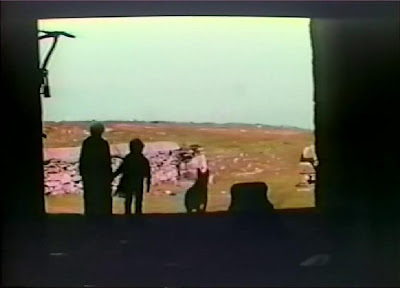 Characters have visions of those who have died returning to life, ghosts of the old witch, the little boy and the dog show up to haunt (or attack) them and there's a catacomb littered with mummified corpses (which are eventually brought to life) underneath the abandoned village rumored to contain a treasure. Two of them attempt to leave by foot and walk all day but end up getting nowhere in process. There's a hanging and one guy is burnt alive while trapped inside a car (after attempting to run off with the stolen money). The dog rips someone else apart, the mummies take care of another and for a coup de grace we get an exploding head. There's loads of profane, raunchy dialogue, constant insults being hurled around, a little sex (Linda has no issue screwing her kidnapper, despite the fact he likes to slap her around) and a lot of fighting. It's all rather nasty and nihilistic, and the dynamic between the brother-and-sister characters gets really twisted after awhile. He masturbates in front of her into the fire and she (apparently fed up with being denied some action by the gang leader) decides to give her brother head. Yeah, gross, I know. I already warned you this was pretty sick at times! 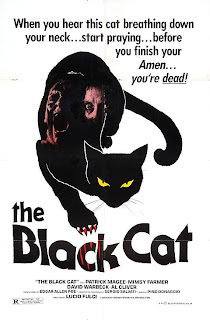 When I say "surprisingly good" it typically means that either the film has totally flown under the radar to little fanfare or that it's been outright rejected by critics and / or fans... but I liked it, anyway. This is one such case. The film came in between Fulci's living dead splatter-fest ZOMBI 2 (1979) and his spate of early 80s gore flicks such as THE BEYOND (1981) and NEW YORK RIPPER (1982). All of those were hits on VHS during the video boom era and established Fulci as an icon to gorehounds around the globe, so I suppose it should come as no surprise that many of them were disappointed by what The Black Cat had to offer. After all, this is one of his least gory, least bloody films of the period. You won't find eyes being gouged out or sliced with razors in close-up, brains oozing out of crushed heads or anything of the sort. So what do you get instead? For starters, a better made movie. The budget seems to be higher than usual; it's vividly and creatively photographed by Sergio Salvati (who utilizes lots of low level cat POV shots) and boasts an excellent Pino Donaggio score. You also get an intense performance from talented character actor Patrick Magee, a man of the stage who it's said only did films for the money. Magee's acting is so far above the norm for a Fulci movie that it instantly lends a distinction that's lacking in most of Fulci's other films.

"Freely adapted" from the story of the same name by Edgar Allan Poe, things open with a fiery car crash that sends the driver out of the windshield before cutting to some charming opening credits of a black cat navigating the rooftops of the village and making its way back home. But don't become too fond of the cuddly kitty. Immediately before the crash, the driver discovered it in the back seat of his car and, somehow, the cat put him into a trance, caused him to let go of the steering wheel and then crash into a parked vehicle; killing him. The cat returns to his home, heads upstairs to where its owner - Professor Robert Miles (Magee) - is intently listening to some strange, distorted tapes, and then scratches the hell out of his hand. As we'll later find out, the Professor and the feline share a very odd link. Or as he says, they're "bound together by hatred."

Miles is feared and hated by the townsfolk in about equal measure. A loner, he frequents a nearby cemetery late at night with his audio equipment in an attempt to capture the voices of the dead. Aside from communicating with the spirit world, Miles possesses psychic powers and the ability to hypnotize people. He believes that the black cat who's hounding him will eventually kill him, but attempts to poison and hang it don't work. It keeps coming back. After a young couple disappear, Lillian (Dagmar Lassander) comes to Miles for help locating her daughter. Miles leads Lillian and the authorities to the missing girl and her boyfriend, but by then it's too late. They've both suffocated after being locked inside an airtight boat house. Cat prints and fur are found at the scene of the crime. A gossipy drunk (Bruno Corazzari) is then pushed onto some spikes. Local cop Sgt. Wilson (Al Cliver) decides to call in Scotland Yard Inspector Gorley (David Warbeck) to get to the bottom of the sudden rash of seemingly accidental deaths. Meanwhile, American photographer Jill Travers (Mimsy Farmer), who's come to England to shoot pictures of ancient ruins, starts getting to know the Professor and slowly comes to the realization that the cat is somehow acting out Miles' subconscious impulses.

Everything here isn't perfect; especially the confused supernatural elements. Though I can accept the concept of a human to animal psychic link, there's no attempt made to explain how the ghost cat is connected to Miles. Or better yet, why the ghost cat is connected to Miles. Since the Professor isn't given proper motivation, and some of the victims are innocents who we've never seen cross or mistreat him, the murders that occur are as much random as revenge oriented (or just a case of wanting people who know too much out of the way). Other scenes, such as the failed attempt to kill the cat causing Jill's windows to explode, lights to flash and bed to levitate, seem completely out of place. One could also gripe about the obvious dummy during a sequence where a victim is burnt up in her apartment and jumps out of the window. But the whole thing is so interesting, and so nicely presented with a modern Gothic feel, that I was willing to say to hell with logic.

Unusual direction, too. I doubt you'll ever see more close-ups on eyeballs in any other film! The cast includes Geoffrey Copleston as another Scotland Yard detective called in at the end to help out, and Daniela Doria (who - as per her usual - provides some nudity) as the boat house victim. DVD from Anchor Bay.