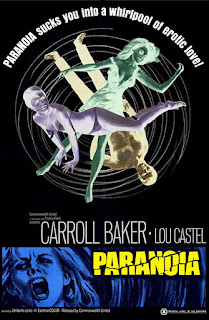 ... aka: Dejlig enke i farlig trekant (Lovely Widow in a Dangerous Triangle)
... aka: Erotisch waanzinnig (Erotically Insane)
... aka: O Louco Desejo (The Crazy Desire)
... aka: Paranoia
... aka: Sadismo
... aka: Une folle envie d'aimer (A Mad Desire to Love)
Directed by:
Umberto Lenzi
Sick of playing the Hollywood game, her limiting contracts at both Warner Bros. And Paramount (she ended up being fired by and essentially blacklisted from both) and having a hard time finding acting work after several high-profile flops, actress Carroll Baker divorced her husband, took her kids and moved to Rome for a ten year period in the late 60s. After appearing in the forgotten comedy Her Harem (1967), she starred in the film would go on to define her entire stint in Italian cinema: Romolo Guerrieri's giallo THE SWEET BODY OF DEBORAH (1968). Thanks primarily to some coy nude scenes from its star, Deborah became a box office hit in Europe and the actress went on to headline many similar thrillers, mysteries and horror flicks over the next eight or so years, most of which tried to capitalize on the promise of Baker nude scenes. Many of these, particularly the earlier ones, were considered very racy for the time but are tame by today's standards.
Orgasmo (released in the U. S. as Paranoia and noteworthy as one of the first films to get the then-new U.S. X-rating) was Baker's second giallo and third Italian film. It also marked the first of four films Baker did with director Umberto Lenzi. The two followed with So Sweet... So Perverse (1969), A Quiet Place to Kill (1970) and Knife of Ice (1972). Once giallo fell out of favor in the mid 70s, Baker did a couple of sex comedies and then returned to the States. Her first film back was the incredibly tasteless black comedy Bad (1977), an indie for producer Andy Warhol, where she gave one of her finest performances yet. The film managed to renew interest in her and a few years later she was working for top studios like Disney and Warner again. 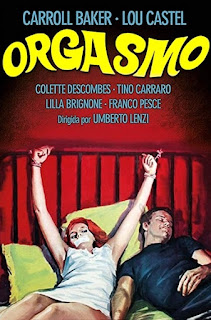 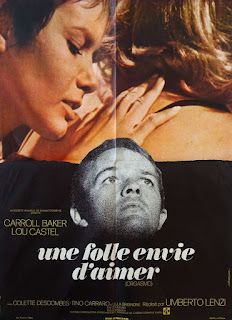 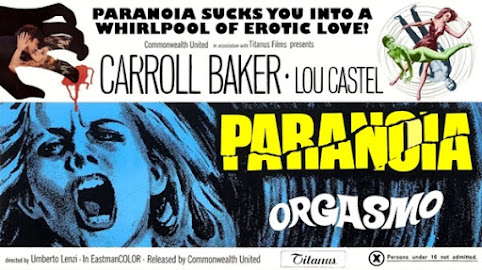 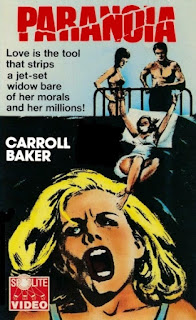 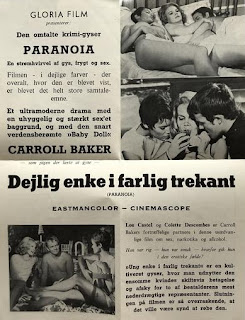 Baker's role here, which has some interesting and probably not coincidental parallels to her real life, is scandal-plagued widow / celebrity Kathryn West. Kathryn flees to Italy from New York City after Robert, her much-older, obscenely wealthy hubby, unexpectedly died in a car crash. Robert owned two petroleum companies, four television stations, a chain of department stores, real estate and other assets that are all currently in the process of being liquidated and sold off. But all the money in the world couldn't buy love and affection and that's what the relationship was sorely lacking. In other words, while Kathryn may miss him... she doesn't miss him that much. And she definitely doesn't miss his family, who aren't too thrilled that she's planning on selling most of his properties and businesses, which they feel should stay in their family; hence why she was so eager to get out of New York and never plans to return.

Kathryn is greeted by a mob of reporters at the airport, but she's soon whisked away by her lawyer Brian Sanders (Tino Carraro) to the Italian countryside. A beautiful, luxurious and, she hopes, tranquil villa awaits. Kathryn is so dead set on peace and quiet to work on her paintings that she insists on as little noise and commotion as possible, which includes removing all television sets from the home. Due to the stress, she's taken to chain smoking, popping pills and guzzling as much J&B Scotch and wine as she can get her pretty little manicured hands on.
The quiet doesn't last for too long. A confident and very brash young man, Peter Donovan (Lou Castel), shows up one day obnoxiously honking his horn and looking for a place to fix his vehicle. Finding herself attracted to him, Kathryn lets him in and he's soon joining her for a hilarious "steamy" shower romp which wouldn't be funny except for the fact someone from off-screen is going crazy pumping comic amounts of smoke on both of the actors as they're pawing at each other. Trying not to draw attention to their secret affair, and not wanting the moody housekeeper Teresa (Lilla Brignone) to find out what they're up to, Kathryn sneaks Peter out of the villa following every encounter. After all, it probably wouldn't look too seemly for a new widow to be getting her oyster shucked by a young man just a few weeks after her husband's death, eh?

After returning from London from a disastrous meeting with her late husband's aunts, Kathryn wants to pick up where she left off with Peter. At first he refuses her offers of money, but she soon finds herself paying three months of his back rent. When she invites him to stay at her villa for a week, he invites his hereto unmentioned sister Eva (Colette Descombes) over. The short-haired Eva appears to be a free spirited and gentle "make love, not war" type and doesn't hesitate to express her extremely high opinion of Kathryn. And, while flattery may not get you everything, it at least helps get your foot in the front door. Kathryn is soon enjoying the youth culture and partying hard; hitting up discos, drinking even more than she usually does, taking new pills, trying on terrible wigs, engaging in kinky sex (did I mention that Peter and Eva are only stepsiblings?) and sleeping in until four in the afternoon.

Kathryn's life soon starts spiraling out of control. Someone appears to be sneaking into her home late at night, turning showers on, opening windows and doors and moving her self portrait. Eva starts slipping her drugs and Peter fires Teresa and mute handyman Martino (Franco Pesce) and then starts slapping her around. Eventually Kathryn has enough of their "degenerate games" and kicks them out... but they aren't going away so easily and return to take over the home. The twisted duo blackmail her with lezzy photos, keep annoying her by playing the same song over and over again, continue to drug her and ply her with liquor, slap her, beat her with a belt, call her things like "demented drunk" and "filthy bitch," serve her a live frog for dinner and finally plot to kill her.

Even though I've not yet seen all of Baker's European films, this is by far the most entertaining performance I've seen out of her in an Italian film. While she's saddled with plenty of cringe-inducing "naughty" dialogue in the earlier erotic scenes ("Dirty me, dirty me, yes yes yes yes!"; "I want to DEVOUR you!"), she does a decent job when her character later descends into madness. My favorite bit though is when she makes the casual aside "I've had a problem with my liver lately" right before sucking down a pill with some wine.
Though it's admittedly not saying very much, this is also the best giallo I've seen from Lenzi. While not all that impressive visually (there's elegant interior design, garish 60s fashion aplenty and the usual zooms, out of focus and kaleidoscopic shots from the cameraman) it's consistently entertaining, often hilariously (accidentally) campy, sleazy and well-paced, plus you do at least feel invested in what's going on and in the fate of the various characters by the end. Never mind the fact Roger Ebert selected this as the second worst film of 1969, behind only Jess Franco's Succubus! We already know he didn't watch stuff like DRACULA (THE DIRTY OLD MAN), IT'S ALIVE and Scream Baby Scream. 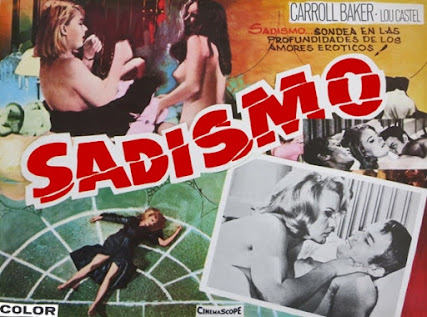 This received pretty spotty home video distribution in the U. S. until recent. At the dawn of the video era, there were cut, pan-n-scan early Beta and VHS releases from NTA and Spotlite Video (both divisions of Republican Pictures) here, plus a VHS from Videoform in the UK. The later DVD-R version from Synergy Entertainment was a cut, full frame TV print. A Blu-ray was finally released in 2020 by Severin Films.
★★1/2
Posted by The Bloody Pit of Horror at 9:30 PM 4 comments: