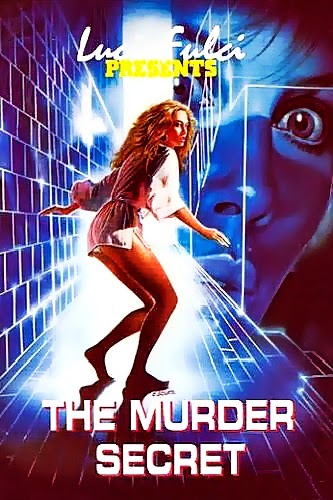 
Lucio Fulci Presents yet another middling low-budget Italian horror-gore flick without much to recommend it. Little Richard Hamilton is traumatized when his mother (Anna Maria Placido) jumps to her death from a window immediately after visiting his deranged Aunt Martha (Sacha Darwin) in a nuthouse. Thirty years pass and adult Richard (Gabriele Tinti) receives an invitation from his estranged aunt, who has finally been released from the St. George Mental Health Clinic and would like for her nephew to visit. Richard packs up his stuff and decides to take his family; wife Nora (Adriana Russo), teenage daughter Georgia (Jessica Moore) and young prankster son Maurice, along. His older son Charles decides to meet them all there later. Once they arrive, Aunt Martha is nowhere to be found, but a suspiciously friendly "caretaker" named Thomas (Maurice Poli) lets them know she'll be along eventually. In the meantime, they're advised not to enter a certain room that Martha keeps locked. 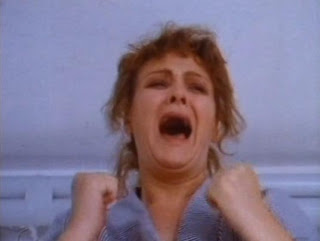 By the next day, dear auntie still hasn't arrived. Instead, a gloved psycho pops in to say "Hey!" and starts hacking his or her way through the family. Mom goes into town to do some shopping and dad takes a walk, leaving Georgia all alone to face a bloody Psycho shower stabbing. Young Maurice gets decapitated with a chainsaw and, when mom finally returns, her head gets lopped off with one slam of a wooden trunk lid. Richard stumbles onto a secret cemetery with five tombstones already brandishing the names of his family members. When he returns home the shocking (not really) family secret to what's going on is finally revealed. 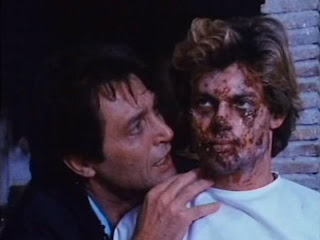 Though not incompetently made, this film suffers from three major problems. First, the dubbing and dialogue are both horrendous. That probably won't bother the Euro-horror target audience in the least, but I figured I'd point it out, anyway. Second, it takes forever to rev up. Almost an hour has passed before a drop of blood has been spilled and the film does little to keep our interest in the meantime. Finally, the whole shebang is too predictable. The mystery killer's identity couldn't be any more obvious and the motive is uninteresting. The film also tries to wedge in some supernatural ghost / haunting stuff at times but it doesn't work at all. On the plus side, the gory moments are alright. I liked seeing a little kid suddenly getting his head chainsawed off. Yeah, yeah, yeah, I know I'm a sick-o, but that mean-spirited stuff puts a smile on my face. 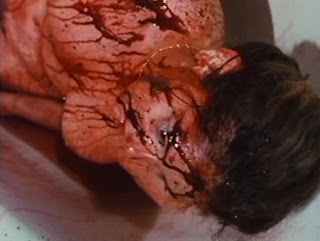 Lead actor Tinti was married to Emanuelle series star Laura Gemser and appeared in all manner of exploitation and horror films from the early 50s until his death in 1991. Some older viewers may remember those days in the 80s and early 90s when cable channels used to import much of their erotica from Europe. Two of the more popular titles during this time were Eleven Days, Eleven Nights (1986) and Top Model (1988), both of which starred the busty Moore (who sheds her clothes twice in this one). Poli and Darwin both put in appearances in Fulci's gory black comedy TOUCH OF DEATH in 1988. Speaking of Fulci, he was a producer and "supervised" this production. Director Bianchi, a prolific porno director, also made the very sleazy possession flick Satan's Baby Doll (1980). 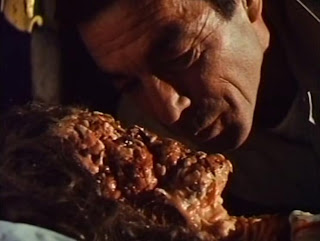 As far as the Lucio Fulci Presents advertisement tag is concerned, I can't make heads or tails of these movies as a connected series. Some seem to be made for TV, some are theatrical releases (or were meant for theaters but never made it there). Fulci himself serves as director / writer on some of these, but not most. One site I went to claimed the titles in the series are Hell's Gate (1989), MASSACRE (1989), THE RED MONKS (1988) and this one. However, I read an interview where Fulci claimed the series also includes Bloody Psycho (1989) and Escape from Death (1989) as well as three films he himself directed. I'm just... confused. Clips from many of these movies (Murder Secret included) later showed up as filler in Fulci's NIGHTMARE CONCERT (1990).