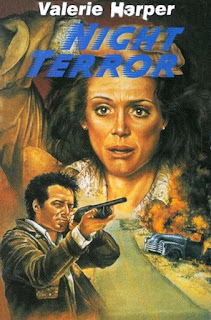 Having just enjoyed Valerie Harper's hilarious OTT screaming at anything horrific in THE PEOPLE ACROSS THE LAKE (1988) I was led straight over to this earlier TV movie hoping for more of the same. Whether or not she performs as I'm hoping has yet to be determined. Harper is a famous actress I have no recollection of from my childhood, though she's a major TV icon. Before my time, she found critical success on Mary Tyler Moore playing Rhoda Morgenstern from 1970 to 1974. That character was so popular she even got her own spin-off series titled Rhoda that lasted five seasons. Work on those two shows alone landed her four Emmy Awards and a Golden Globe. Afterward, she attempted to transition over to the big screen but the films, like 1980's The Last Married Couple in America and 1984's Blame It on Rio, were flops. So back to TV she went. After starring in the very good Don't Go to Sleep (1982) and some other TV movies, she finally got to headline another sitcom, Valerie, in 1986, but salary disputes going into the third season saw her getting kicked off the show bearing her own name. It was then re-branded as The Hogan Family with new star Sandy Duncan. Now I actually DO vaguely remember Duncan and the Hogan offshoot from my childhood. Had Harper kept the part I'd probably have some nostalgic connection to her today instead of the Wheat Thins lady everyone said has a glass eye. 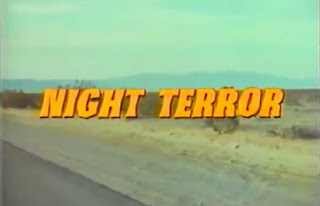 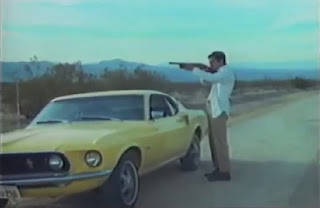 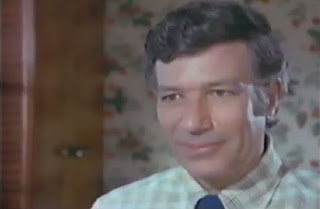 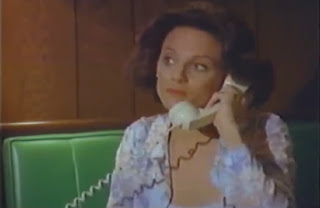 In this one, Valerie has a similar role to what she had later in both of her other genre TV movie appearances, that of a stressed out and frazzled mother. Here, she's married to  “corporate nomad” Walter Turney (Michael Tolan), whose job moves him, her and their two young children, Nancy (Quinn Cummings) and Buddy (Damon Raskin), to another state every couple of years. As the family is packing and preparing for another of these moves from their current home in Phoenix to Denver, Valerie's fidgety character Carol is involved in a few comedic bits where she keeps misplacing and forgetting things and has to be kept straight by pretty much the entire rest of the family. Along with their Aunt Vera (Beatrice Manley), the kids are flown out to Denver a few days early, while Carol and Walt stay behind and plan to drive their car up, giving them a little private time for their “second honeymoon." 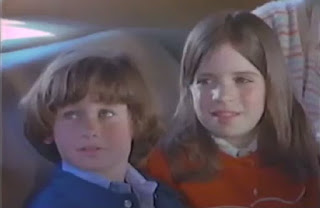 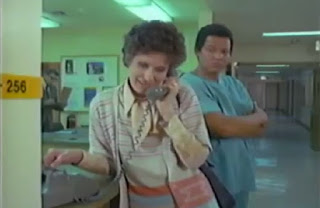 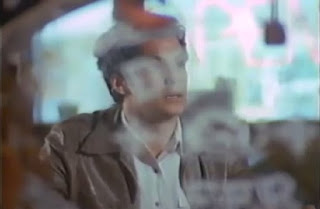 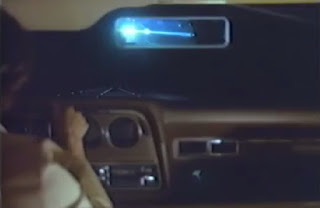 Things don't go according to plan when Walt gets caught up at work and Carol is stuck waiting for him at a hotel. Carol then gets word that in Denver her son has fallen ill, is at the hospital and in need of emergency surgery. After finding that out, she can't get ahold of her husband and an attempt to get plane tickets also fails because the Denver airport has to temporarily shut down due to a blizzard. Carol has to make a quick decision and decides to check out of the hotel and make the sixteen hour drive up to Denver all by herself in the middle of the night. And that's when she has the misfortune of encountering a psycho on the road, and witnessing him shooting a cop dead, which prompts a chase that lasts almost the entire rest of the movie. 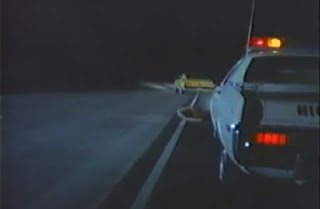 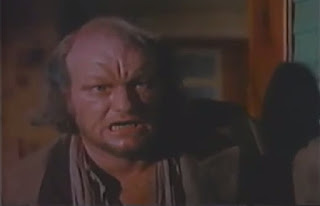 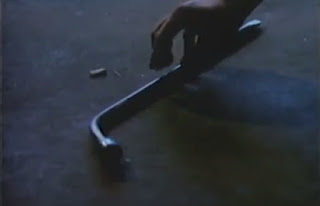 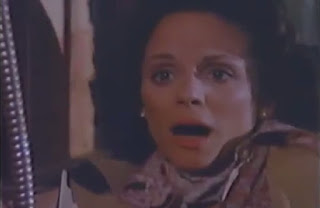 Richard Romanus, notable as one of the only graduates of an Andy Milligan film to go on to any kind of film career (he co-starred in Scorsese's Mean Streets just five years after appearing in The Ghastly Ones), gets to play the crazy guy, who's only identified as “The Killer” in the credits. He's such a mean SOB he shoots holes in a No Littering sign with a rifle, pours coffee all over a counter then spits money at a diner waitress, destroys a soap dispenser in a public restroom and (gah!) drinks Pepto straight out of the bottle (Is this where that cliché comes from?) His mode of transport is a yellow Mustang and, oh yeah, he's also mute and can only speak with the aid of an electrolarynx, which he barely uses in the film. We learn next to nothing about this guy but hints are dropped he's a war vet now working as some kind of professional assassin. 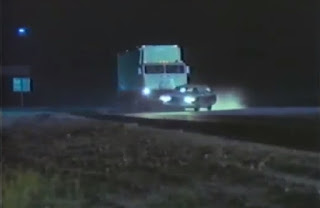 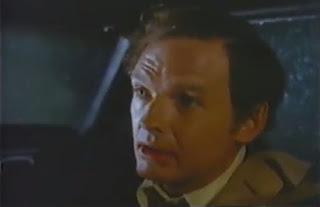 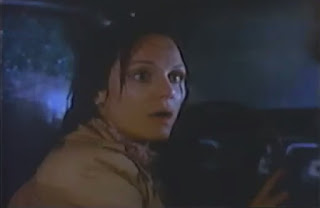 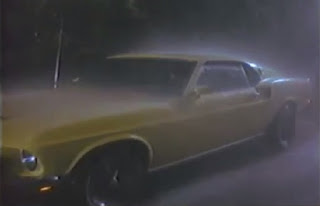 While much of this movie impressed me, it ultimately led to a place of disappointment. The opening twenty minutes of character and plot set-up is merely adequate but once Carol hits the road at night this does a wonderful job establishing a sense of isolation and building suspense, which starts with our protagonist simply attempting to find an open gas station late at night with a near-empty tank and is cranked up from there. Even scenes of Carol stumbling across a few other people - a mentally retarded derelict (John Quade) and an obnoxious drunk yuppie (Nicholas Pryor) - during her nightly travels are fairly well integrated into the plot. Cinematographers Frank Beascoechea and Vilis Lapenieks do a stellar job with these scenes. This manages to capture the loneliness, quiet and all-enveloping darkness of night yet you can always tell what's going on; something not so easy to pull off.

What sadly happens as the pursuit continues into the following day is that this not only loses its dark, tense atmosphere but the script also runs out of ideas and then starts getting repetitive and sometimes downright silly. Carol implausibly runs out of gas for a second time out in the middle of nowhere simply to put her in another vulnerable position. And after getting her hands on the killer's empty rifle, she just throws it at him so he can pick it up, load it with shells and start shooting at her. 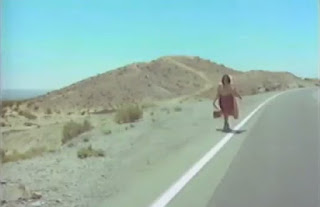 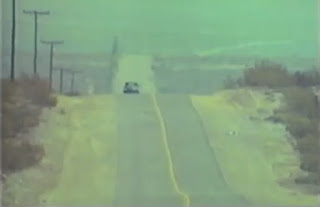 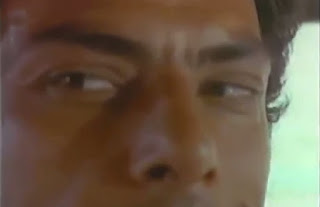 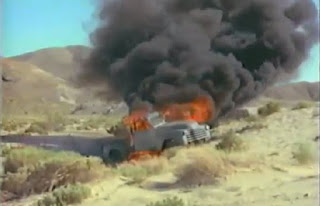 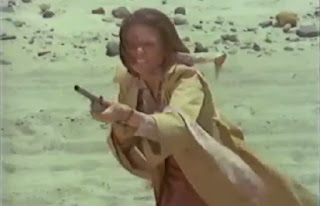 As far as Harper is concerned, this is neither a strong dramatic turn like in Don't nor her cranking her hysterics up to an 11 like in the silly Lake. She's passable yet pretty forgettable here, sometimes even a bit annoying with her little squeak-and-moan reactions to the events. As the killer, Romanus is likewise OK but isn't given a fleshed out character he can do much with. Less than a year after appearing in just two scenes in this as Hartman's daughter, Cummings would become one of the youngest Oscar nominees in history spouting Neil Simon one-liners in The Goodbye Girl (1977), though that did little to actually help her career and she was out of films for good a decade later. The director also made Death at Love House (1976), Vampire (1979) and Terror at London Bridge (1985); all TV movies.

After debuting on NBC, this Charles W. Fries production was regularly shown on TV for awhile and then received a U.S. VHS release through WorldVision Home Video, who released many other TV movies.