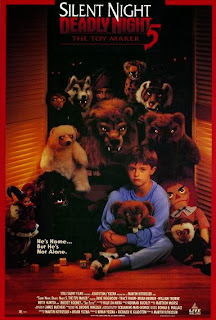 
A present addressed to young Derek Quinn (William Thorne) arrives on his doorstep late one night. Luckily for him, his father Tom (Van Quattro) ends up opening it instead and is killed when a strange ball / toy latches onto his face and causes him to fall and gouge his eye out on a fire poker. Two weeks pass and Derek hasn't spoken a word since the incident. He also refuses to go into his bedroom, where the deadly toy sits on a shelf, and seems to be frightened of packages and Christmas things in general. Derek's mother Sarah (Jane Higginson) didn't see what really happened and is, of course, completely oblivious to why Derek is behaving the way he is. In an effort to cheer him up, she takes him to a small, struggling toy store run by Joe Petto (Mickey Rooney), who crafts handmade toys. Joe seems like a jovial and friendly sort... until customers are out of the store and he starts sucking down Jim Beam and snarling "I oughta break you in half!" to his awkward teenage son Pino (Brian Bremer). Joe isn't very nice to his poor boy, whom he berates on a regular basis and forces to sleep in the cellar, and Pino himself may be more than just a run-of-the-mill oddball himself. 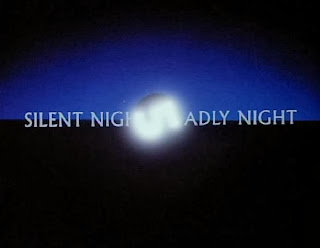 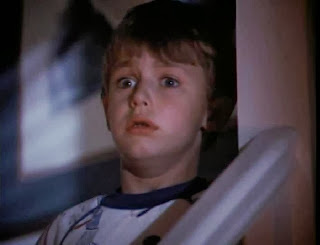 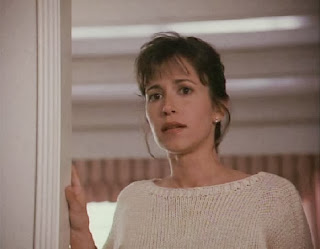 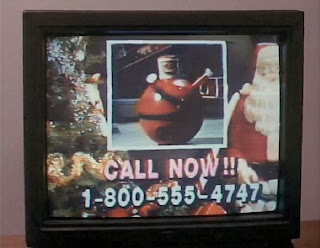 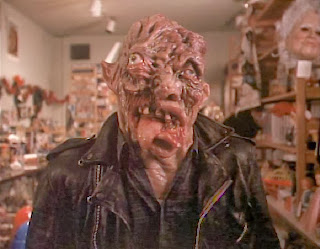 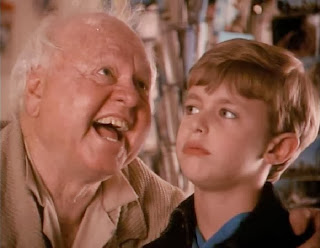 Army vet Noah Adams (Tracy Fraim) shows up in town with a clipping about Tom's murder in his back pocket. He begins  frequenting the toy store, buys up bunches of the toys at a time and takes them back to his hotel room to disassemble them. Seems like he's caught on that something fishy is going on over at Petto's Toys; namely that some of the toys that come out of the place have been designed specifically to kill. Behind on his rent, Noah pays off the hotel owner with a "Larry the Larvae" toy from the store, which ends up springing to life. It forces itself inside the guy's mouth, pushes out his eyeball and causes him to crash and blow his car up. Another boy puts on a pair of roller blades, which are hard-wired to make him go out of control and he's run down by a car. Strange packages keep getting left at the Quinn home by someone. Joe and Pino used to live there and are resentful they've fallen on hard times. And if you think the references to Pinocchio in the character names have nothing to do with the plot, you'd be mistaken. 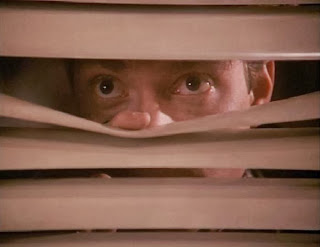 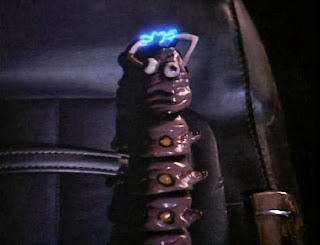 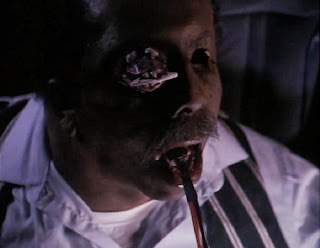 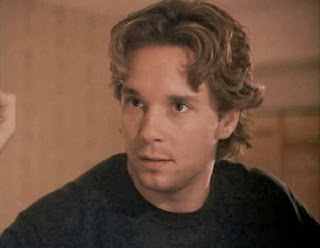 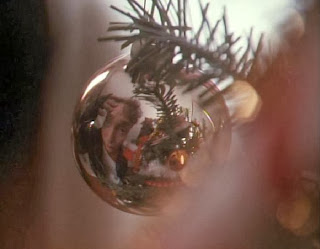 Sometimes it's a good idea to watch horror franchises in order and in quick succession or else you'll probably miss out on clever little touches when they actually are present. This is one of those cases. There's a lot of poking fun at the previous film if you pay attention and some of it is actually pretty amusing (like the above-mentioned larvae toy). Neith Hunter, who starred as Kim in the previous entry, plays Sarah's best friend and neighbor, who's also named Kim. At one point she says "You would not believe the things I've been through. I hardly believe them myself." in winking reference to all the crazy things that went down in Silent Night 4. Clint Howard, who played Ricky the mentally-impaired rapist bum in Part 4, has a one scene cameo as a department store Santa Claus named, you guessed it, Ricky.

Not only are some cast members back, but so are some of the crew people. Part 4's director Brian Yuzna also co-wrote the screenplay and produced this one and Screaming Mad George and Tom Rainone are back on fx duties. Yuzna's son Conan Yuzna, who had a small role in Part 4 as Lonnie, also plays a kid named Lonnie here. Cathy Yuzna (Brian's wife) and Zoe Yuzna (their daughter) also have small roles. As silly and utterly ridiculous as this whole thing is, I had quite a bit of fun with it. Production values are fine, acting's OK, there's plenty of humor, lots of nifty little killer gadgets and some moments here and there that genuinely take you by surprise. The ending had me laughing out loud. 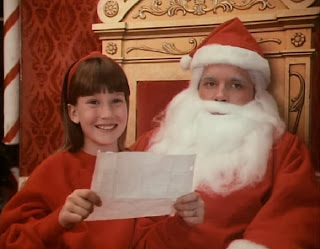 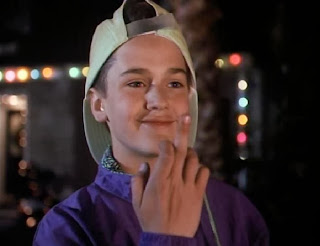 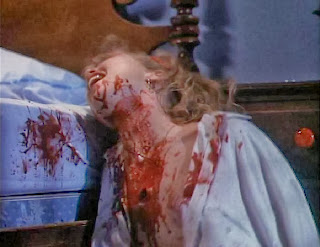 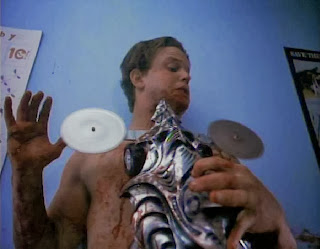 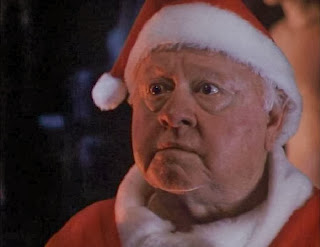 Apparently, Mr. Rooney was among those who publicly protested the original SILENT NIGHT, DEADLY NIGHT (1984) and wanted it removed from theaters, so for him to show up later on down the line in the same series is quite odd. Then again, if there's one thing that can get someone off their moral high horse and make them forget their values, it's a wad of cash being waved in their face. Rooney's presence here probably just boiled down to nothing more than another paycheck for the 70+ year old. This is most certainly not in better taste than any of the others in this series, particularly during a scene where the teenage babysitter and her boyfriend get accosted in bed by a slew of killer playthings that Rooney's character (dressed as Santa Claus!) unleashes upon them. So what's really less moral: a killer dressed as Santa committing axe murders or a killer dressed as Santa who lets killer toys loose in a bedroom where a disembodied hand sticks a finger up a guy's ass and a toothy piece of green plastic chomps down on a girl's crotch? These "good moral values people" are a fuckin' riot! 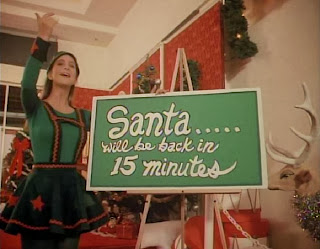 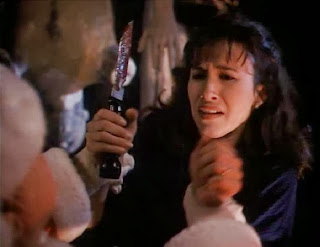 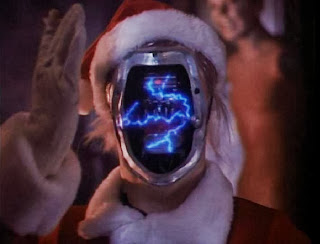 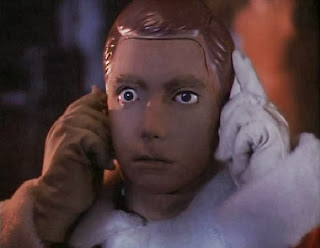 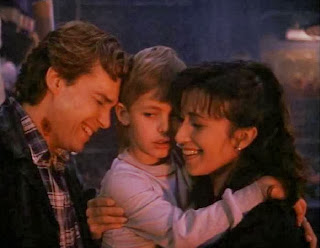 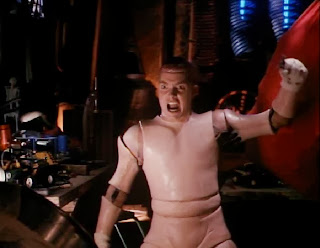 Director Kitrosser also wrote the third and fifth installments of the Friday the 13th series, directed the Bad Seed rip-off Daddy's Girl (1996) and has served as a script supervisor for Quentin Tarantino ever since Reservoir Dogs (1992). This, SILENT NIGHT, DEADLY NIGHT III: BETTER WATCH OUT! (1989) and SILENT NIGHT, DEADLY NIGHT 4: INITIATION (1990) are all available from Lion's Gate.