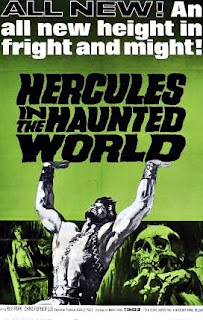 
Story-wise, this is your standard issue peplum fantasy-adventure. Aesthetically, however, it's a whole other story. Though some feel that Bava's talents were squandered doing a lightweight, juvenile film like this, his vivid and intoxicating use of color and talent for staging scenes for maximum atmosphere on a minimal budget were the perfect touch for something just like this, resulting in a fun, harmless little romp that also happens to be quite beautiful. There were dozens of similar films produced in Italy following former Mr. Universe Steve Reeves' turns in the successful Hercules (1958) and Hercules Unchained (1959). The title role was frequently re-cast for some reason, with Brad Harris, Kirk Morris, Alan Steele, Mark Forest, Richard Harrison, Gordon Scott, Dan Vadis, Peter Lupus and Mickey Hargitay all getting their turn to flex their muscles and fight the forces of evil. This one features bearded muscleman Reg Park, an amiable three-time Mr. Universe, who also got to play the role in Hercules and the Captive Women (1961) and Hercules the Avenger (1964). As an added bonus for genre fans, Christopher Lee is on hand to smirk, grimace and scowl as he does various dirty deeds as the evil ruler of an underworld kingdom.

Beautiful Princess Deianira (Leonora Ruffo) is slated to take rule over her kingdom when something strange happens: she suddenly goes out of her mind. After her beloved Hercules ("... not even the thunderbolts of Jobe will prevent our marriage!") finds her wandering in the garden spouting various nonsense, he goes to King Lico (Lee) to try to figure out what's going wrong, Lico, who has a whole other agenda in mind, informs him that everyone in the village is cursed; doomed to die, and there's nothing he can do about it. Undaunted, Hercules goes to some masked woman to find out what he can do to break the spell Deianira is under. To save the woman he loves he must acquire the shining Stone of Pluto located in Hades / Hell / "The Kingdom of the Dead." But one cannot go to Hades unless they are already dead... unless they have a special golden apple located in the land of the Hesperides, which is ruled over by lethal women condemned to live in eternal darkness by the Gods. But one cannot go to the land of the Hesperides... unless he has a special / magical boat that can sail against the win to take them there. Seems like Herc and company will have their work cut out for them.

Our super-strong hero enlists the aid of his blonde-haired, comparatively scrawny BFF Theseus (George Ardisson) - no guess as to who is the top and who is the bottom in this particular relationship - in his quest. For some reason that defies logic (but does provide highly annoying "comic relief"), useless bumbling idiot Telemachus (Franco Giacobini) also decides to tag along. After a battle with an axe-wielding giant who threatens to quarter one of them with four horses, they get the ship they need to begin their journey. In the land of eternal darkness, there's a downpour of fire from the heavens above and encounters with Queen Aretusa (Marisa Belli), ruler of the cursed women, and Procrustes, which sounds like a cure for athlete's foot but is actually just a clunky monster made of rock who speaks in a hilariously slow voice. Defeating Procrutes opens the Gates of Hell and there our heroes must get past a fiery ocean and branches that bleed and then traverse a pit of bubbling lava. Hercules manages to get the shiny rock while Theseus encounters the lovely Persephone (Ida Galli) and is instantly smitten.

The stone manages to return Deianira to her senses, but more problems soon arise. Theseus unwisely decided to smuggle Persephone aboard their ship on the return trip home, which has greatly angered Persephone's father, Pluto. Pluto promptly lays waste on the countryside, causing one natural disaster after another. Theseus' refusal to give up his new love pits amigo against amigo. Meanwhile, power-mad Lico is informed by the Gods that he needs to drink Deianira's blood to become the "king for all eternity." If the ritual is carried out, poor Deianira will become a creature of the damned. Hercules must not only face off against Lico to save his future bride, but also a legion of resurrected zombies.

Hampered by the loose, almost episodic nature of the plot and extremely corny dramatics, this is still worth checking out strictly for Bava's visual presentation, clever optical trickery and beautiful cinematography. The sets, costumes, props and special effects are all good. Lee - who, like the rest of the cast, was dubbed - appears to really be enjoying his villain role. He'd also appear in Bava's Gothic horror masterpiece THE WHIP AND THE BODY (1963), which also co-starred Galli. Sexy Eurotrash favorite Rosalba Neri is often credited as playing Deianira's handmaiden Helena on cast lists, but that is definitely not her in the role. In fact, I don't recall seeing her anywhere in the film. If she is, she's either playing the masked woman or one of Aretusa's underlings. Though Bava is credited as sole director on the print I viewed, IMDb lists Franco Prosperi (one of four credited writers, along with Bava) as co-director.

The pristine Image DVD (which features a trailer, stills gallery and Italian or English language / subtitle options) uses the Hercules in the Haunted World title for packaging but the print itself is called Hercules in the Center of the Earth.