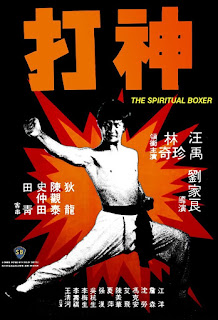 
"Spiritual boxers" are enhanced fighters who've been blessed using magic, charms and special calligraphy to be invincible and impervious to conventional weaponry. The film opens with a demonstration of their special powers as a shaman (Wilson Tong) casts his spells, helping two of his men (special guest stars Lung Ti and Kuan Tai Chen) to withstand sword slashings, spear jabbings and even being shot point blank with rifles without shedding so much as a single drop of blood. We then move from the end of the Qing Dynasty to many years later as Master Zhi Chiang (Yang Chiang) and his young protege Siu Chien (Yue Wong) arrive in a small village. There are wanted posters around for a couple of vicious thugs who've been going around pillaging, murdering and terrorizing various areas. County police aren't of much help, so vigilante justice is recommended.

Master Zhi, who's a drunk, and Siu Chien, who's a clever troublemaker, go from town to town operating their own scam that involves pretending to invoke various animal gods, proclaiming they've been turned invincible by said gods and then using silver-painted wooden weapons instead of steel ones to demonstrate their "invincibility." Having proven their powers, they're then able to fleece superstitious locals. However, a local martial artist named Liu Yung (Han Chiang) has caught on to their latest attempt, which ends with Zhi getting thrown into jail and Siu Chien forced to run off to another village. There, he saves a little boy from being beaten after he steals some bread, refers to himself as "Dragon King of the Eastern Sea" and fake invokes a rain god, which scares villagers away. However, they eventually start taking to him and his strange ways.

Not so friendly is ruthless loan shark Liu Deruei (Chung Tien Shih) and his army of thugs, who don't hesitate beating, stealing from and even torturing the poor locals who don't pay up. Siu Chien manages to get on their bad side when he helps a couple get their money back for some stolen eggs and soon has the bad guys after him. However, they keep their distance at first as they believe his various tricks mean he has supernatural powers. Siu Chien also crosses paths with orphaned village girl Jin Lian (Chen Chi Lin), who lives on the outskirts of the village, makes money weaving baskets and many think is a man due to her short haircut and tomboy nature. The two become friends after she helps get him out of a jam with firecrackers and a slingshot, which gives him the reputation of possessing the powerful "thunder palm."

Once word gets around the village about Siu Chien, he finds himself getting free meals and other perks. He's even invited to the home of wealthy Master Lin (Shen Chan) and his wife (Teresa Ha Ping), who are having something of a problem with a ghost and in desperate need of an exorcism. Their daughter (Mei Hua Chen), who is being courted by cousin Ah Jin (Fei Ai) against the father's wishes, has also been seriously ill for several months due to the haunting. If he and Jin Lian, who is now functioning as his "student" / scam partner, can successfully rid the home of the ghost they'll receive a handsome reward.


Back in the village, all of the local men are starting to adopt the newcomer's unique martial arts techniques, which help them to successfully fight back against the thugs. Liu Deruei then brings in two of his "best" criminals (the same ones featured on various wanted posters in every village) named Shum (Hoi Sang Lee) and Jiu (Hang-Sheng Wu), who prove to be stiff competition for Siu Chien.

Director Liu (aka Kar-Leung Lau) started out as an actor and action director; amassing hundreds of film credits up until this, his feature debut. While Spiritual Boxer may not be the all-out action extravaganza some of his later efforts would be and is usually written off as a lesser film as a result, this is still a bright and entertaining starting point. It's also generally considered one of the very first kung fu comedies and thus proven to be very influential over the coming years. There's more than enough action scenes in here (including an excellent ten minute long climactic fight), likable lead actors, plenty of lighthearted comedy built upon characters and situations instead of the later over-reliance on noisy slapstick and even a few horror touches thrown in. It's handsomely shot, well produced, briskly paced and quite enjoyable. 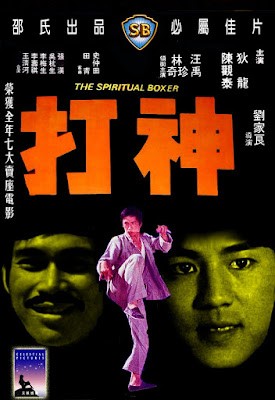 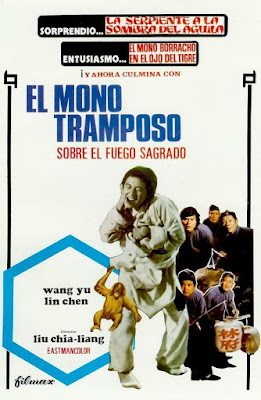 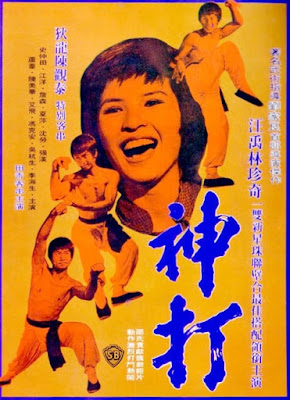 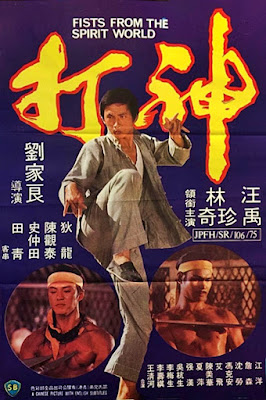 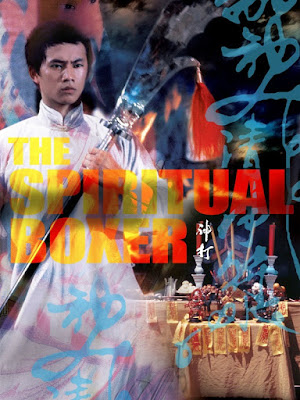 After having already appeared in a handful of films for Shaw Brothers starting in his late teens, this film rocketed its young star (then about twenty) to stardom in Hong Kong. Though mostly a presence in action films, he would also appear in some other Shaw genre offerings like The Snake Prince (1976), Spirit of the Raped (1976) and the Spiritual Boxer sequel The Shadow Boxing (1979) from the same director, plus the non-Shaw films Dress Off for Life (1984), THE SEVENTH CURSE (1986; cameo appearance only), Blood Ritual (1989) and Spiritually a Cop (1991). The supporting cast is loaded with familiar faces, including Hark-On Fung as Liu's main thug, Lao Shen as a restaurant owner, Sau Kei Lee, Ching Ho Wang, Ching Tien and others.


There are numerous DVD releases of this one with English subtitles, including from Intercontinental Video Limited, and a Blu-ray from 88 Films.